Accessibility links
The Case Of The Chicago Mothman Following several recent reports of a strange winged creature around the Chicago area, we try to find out what the heck is going on. 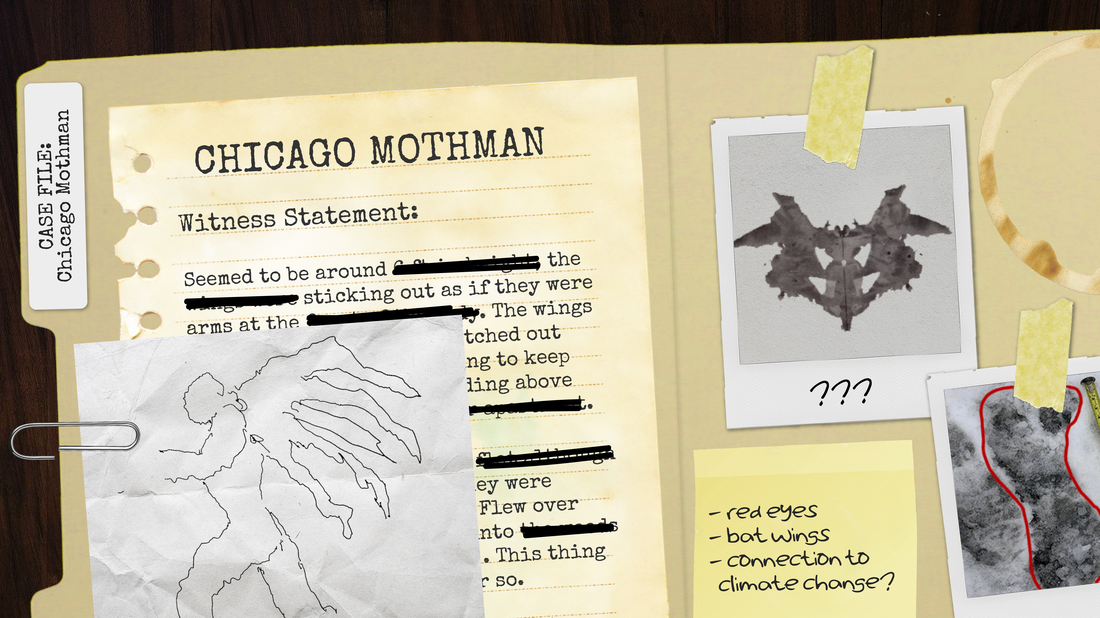 Following several recent reports of a strange winged creature around the Chicago area, we try to find out what the heck is going on. Katherine Nagasawa/WBEZ hide caption

The Chicago region has been experiencing a collective case of the heebie-jeebies in recent years, ever since reports of a giant, flying, winged humanoid began surfacing in 2011.

There was a rash of sightings in Chicago of a creature that people then called the "Chicago Mothman." Did we ever find out what it was?

Well, despite exhaustive research, interviews with witnesses and cryptozoologists, and one good old-fashioned monster hunt (for more on that, listen to the SHOCKING audio story!), we were unable to get to the bottom of this mystery. But, for the sake of science, we've compiled everything we were able to surmise into a digital case file. Our hope is that Chicagoans will be able to keep this investigation going so that we may one day meet our winged friend and ride upon him like a luck dragon.

DISCLAIMER: We are not responsible for any laws that are broken in the pursuit of Mothman, nor are we responsible for the factualness of any of the information contained herein. The following information should not be used as an excuse to trespass on private property or ensnare your hairier relatives with a comically large butterfly net.

In the late 1960s, people around Point Pleasant, West Virginia, began reporting sightings of a creature that would later be dubbed "Mothman." It would reportedly emerge, fly as fast as 100 mph and, oftentimes, leave witnesses with a deep sense of dread. It was later suggested by some locals that Mothman was trying to warn humans of an impending nearby tragedy: the 1967 Silver Bridge collapse, which killed 46 people. However, others posit that this supposed supernatural connection was simply a way for people to make sense of a tragedy without meaning, as one would think there are more direct ways to warn people of danger than just being spooky.

In the intervening years, Mothman's cult fame grew, becoming the subject of an annual festival, a museum and even a 2002 movie starring Richard Gere.

More recently, new reports have emerged. Starting in 2011 and peaking in 2017, sightings of a Mothman-like creature began surfacing all over Chicagoland.

It still remains unknown whether Chicago Mothman is a subspecies of the West Virginia Mothman or the same species — or whether it is, perhaps, just a heron that got caught in a garbage bag.

Below are some clues we've gathered based on reported sightings and interviews. 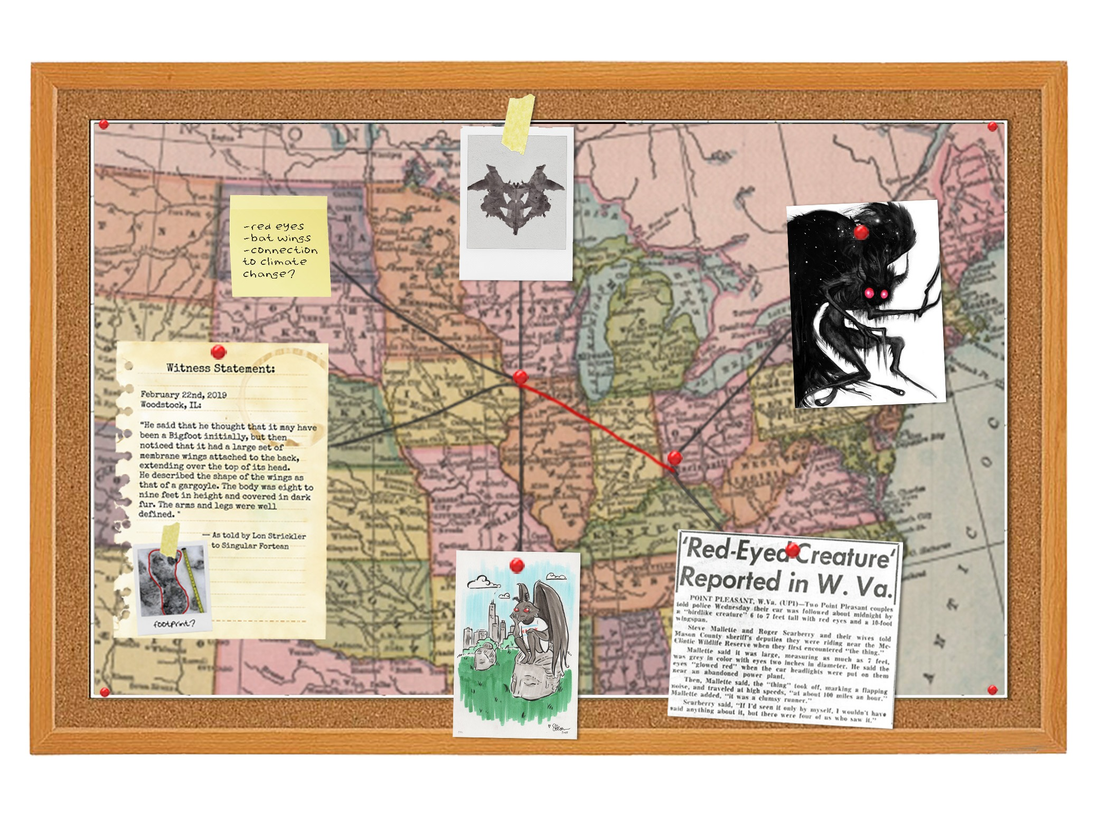 Although originating in West Virginia, it appears that Mothpeople have expanded their range further north to the Chicago area — perhaps, some suggest, as a result of climate change. Images courtesy of Sarah Becan, Brian Serway and Lon Strickler/WBEZ hide caption

- Species it's been compared to: a big owl, a pterosaur, a bat.

- Eye color: "Red eyes," "green eyes," "yellow eyes" and "orange eyes" have all been reported. Probably all the other colors, too.

- Possibly confused with: a barred owl, a shitepoke, a sandhill crane, a drone costume, another Chicago cryptid. 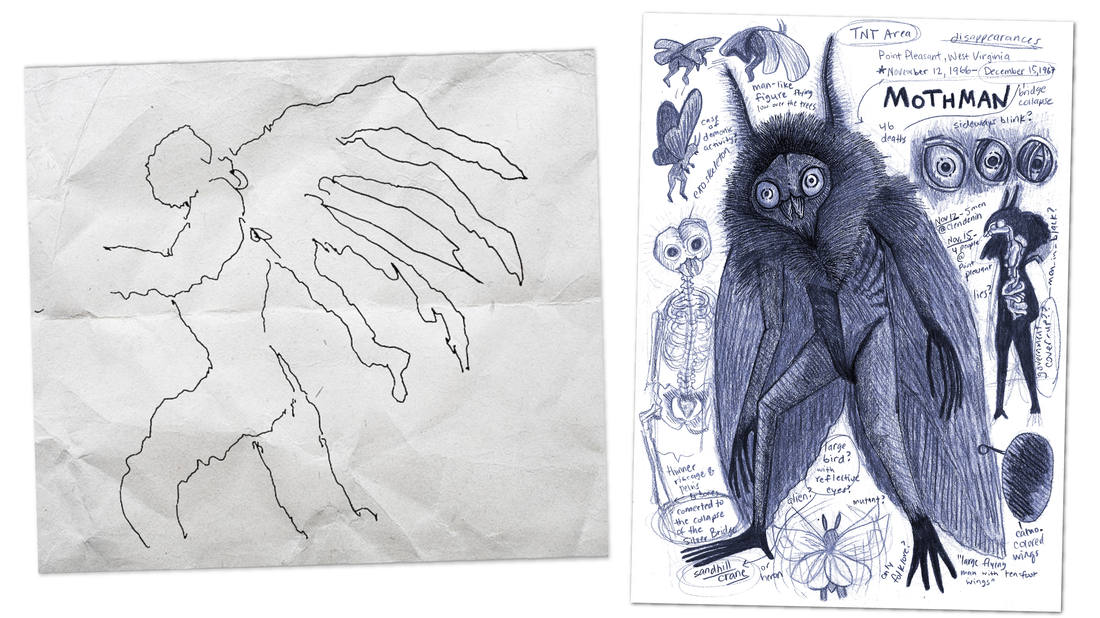 Witnesses and artists have depicted Mothman as a tall, owl-like creature with membrane wings. Courtesy Lon Strickler of Phantoms and Monsters and Egertron Puck/WBEZ hide caption

In the city, Mothfolk are spotted all over, though most often by bodies of water. Sightings collected via the Phantoms & Monsters website are compiled here and in this map. Standout witness statements are excerpted below:

"We were watching and observing as the moon begin its transit when we heard a very loud scream. This sounded like squeaky truck brakes that squeal when you're pressing hard on them. At first we thought that's what it was...maybe a CTA bus or big truck with brakes that needed changing or maintenance.

We heard it again, this time it lasted about 3 seconds, where as the previous sound was brief. I looked up to see a large object flying low over the docks that stick out in to Burnham Harbor from across the water... This object looked like a large black bat, but also had humanoid features such as pronounced arms and legs."

"I was spending the afternoon on a rooftop, and I saw something in the sky [VIDEO EVIDENCE] fairly high up and fairly far away. It wasn't being buffeted about by the wind. It was moving slowly but not randomly."

Location: Fulton Market Street near the corner of Morgan

As reported to: The Chicago Reader

"At first I thought it was a bird, but none I'd seen before, because it was just so huge and the way it was flapping its wings... The longer I watched it, it was like... what the hell is that thing? It was freaky." 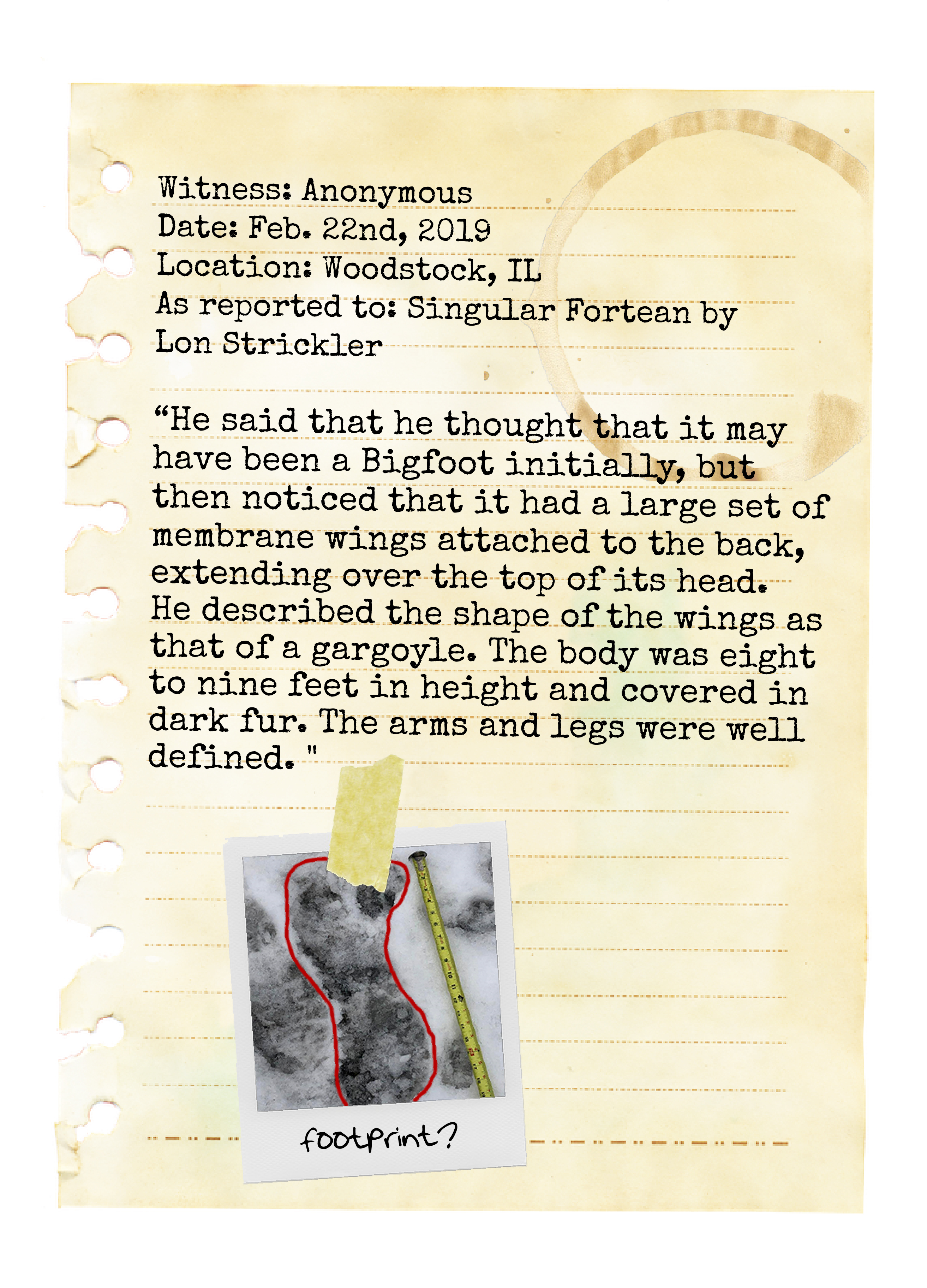 The search continues, with your help

Have you seen Chicago Mothman? If you have a lead, a video, a sketch or a theory regarding what impending doom Mothman might be warning Chicagoans to avoid, please share it with us using #ChicagoMothman on Facebook or Twitter. We can only solve this mystery together. 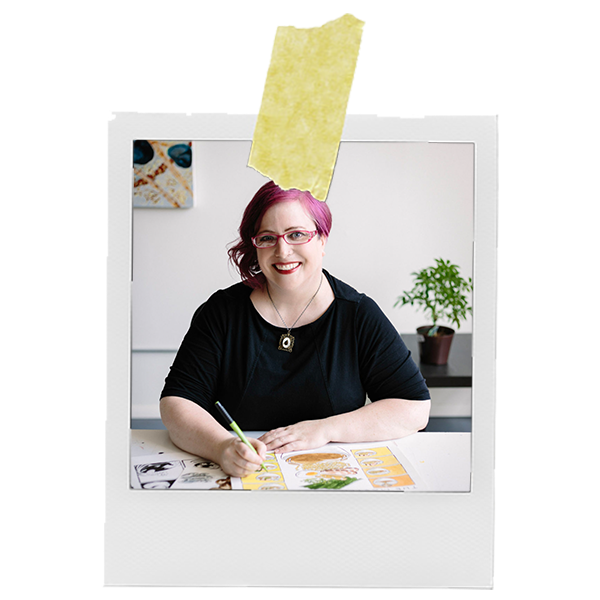 As part of her obsession with Chicago Mothman, Sarah created a series of comics of the creature visiting different iconic sites in our fair city and having a great time. Sarah Becan/sarahbecan.com hide caption

Sarah Becan is a Chicago comics artist who draws mostly food and monsters (including many "Monsterffirmations," as she calls them).

Mothman has been a favorite of hers for some time, and so when people began reporting sightings in Chicago, she says she became a little obsessed.

"When I first started reading about all of the different sightings, I was very excited about it. I definitely kept my eyes on the sky hoping to see something," she says.

But she did more than just keep her eyes on the sky; she went searching.

"In the summer of 2017 ... there was a partial solar eclipse that passed over Chicago, and I deliberately went down to the lakefront because I thought, 'If I was the Chicago Mothman, I would make an appearance at the solar eclipse.'" she says. "And I believe he did, but it was down at Northerly Island ... and I was up at Montrose Beach."

When pressed about what she thinks people could be seeing, after all our detective work, she suggested a large bird, like a sandhill crane, or an owl — or even a prankster with a drone.

As part of her obsession with Chicago Mothman, Sarah created a series of comics of the creature visiting different iconic sites in our fair city and having a great time. 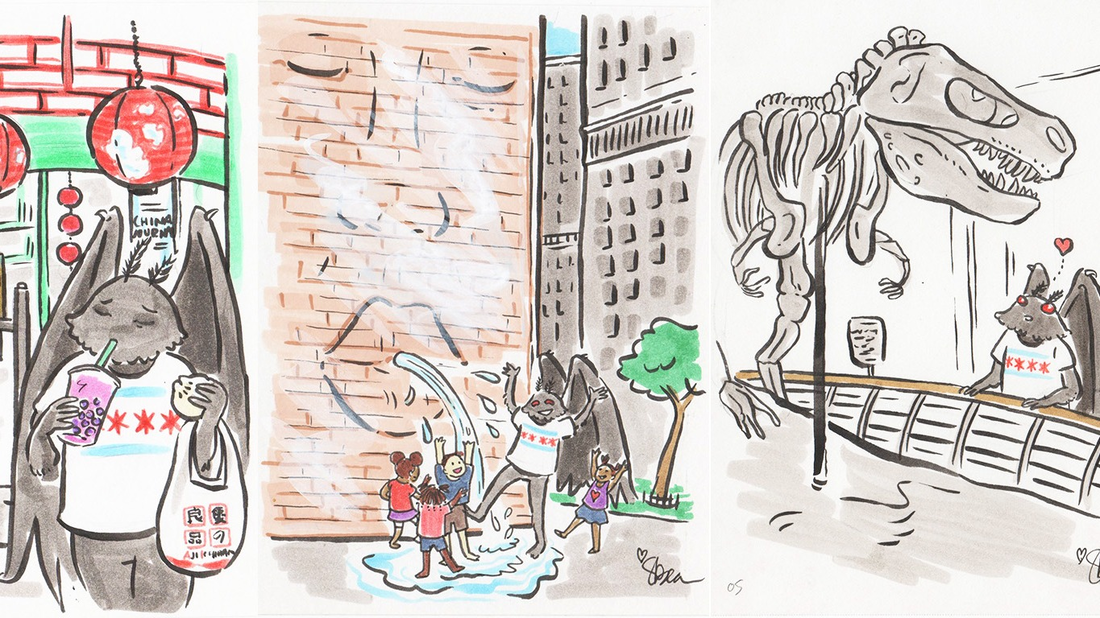 Inspired by all of the Mothman sightings in 2017, questioner and illustrator Sarah Becan imagined the types of activities Mothman might enjoy in Chicago. Sarah Becan/sarahbecan.com hide caption