Ida B. Wells' Lasting Impact On Chicago Politics And Power

Ida B. Wells' Lasting Impact On Chicago Politics And Power

When Ida B. Wells moved to Chicago at the age of 32, she was already a world-renowned anti-lynching crusader, civil rights activist and investigative journalist.

Born into slavery during the Civil War, she later risked her life investigating and exposing violence against black people in the South, and became a co-owner of The Memphis Free Speech so that she had the editorial power to do so. After an angry mob burned the newspaper's office down, she kept going. She published her writings throughout the U.S. and abroad. She traveled, she taught, she spoke.

One CPS high school student learned about Wells' work in the South for Black History Month but wanted to know more about her life in Chicago. So she asked Curious City:

What was Ida B. Wells' legacy in Chicago?

Journalism was just one avenue Wells used to fight injustice. After her relocation to Chicago in 1894, she worked tirelessly to advance the cause of black equality and black power. Wells established the first black kindergarten, organized black women, and helped elect the city's first black alderman, just a few of her many achievements. The work she did paved the way for generations of black politicians, activists, and community leaders. To trace Wells' legacy and understand its impact today, we spoke with some of those leaders — including Wells' great-granddaughter. 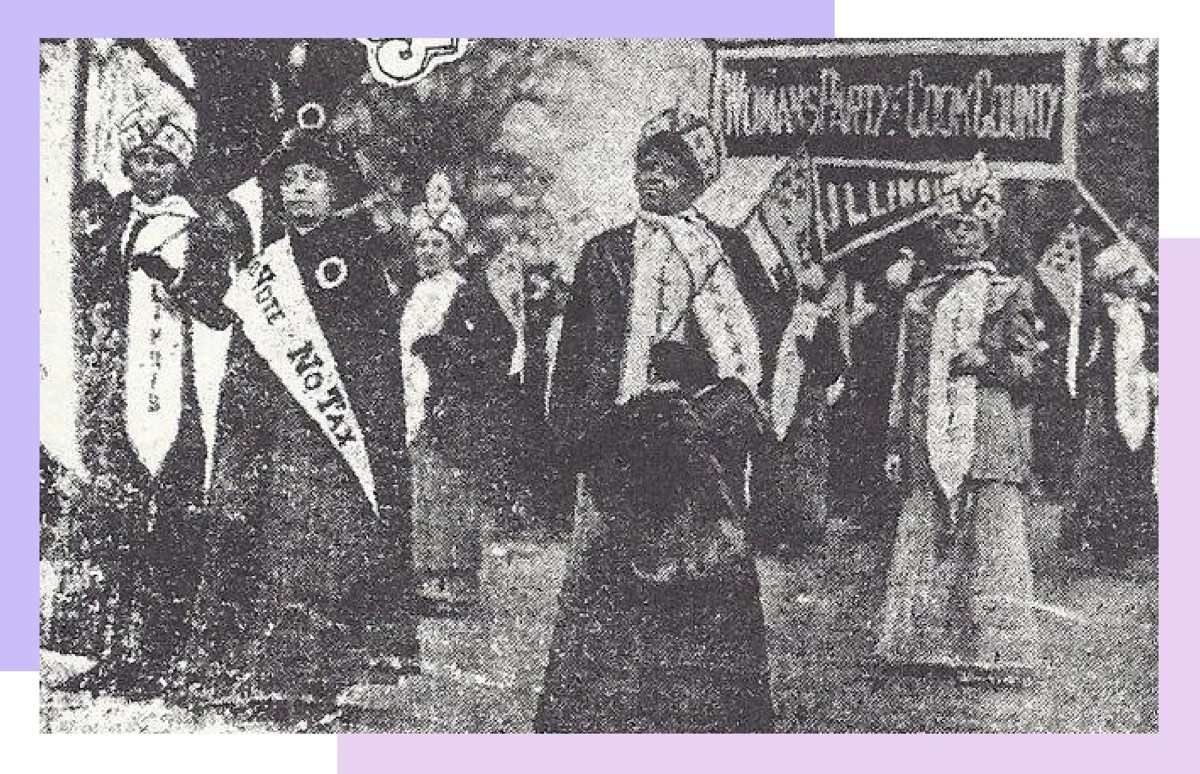 In March of 1913, more than 5,000 women marched in Washington to fight for the right to vote. Wells and other African-American women were told they would be segregated from the main group. But Wells refused, and waited until the procession started before joining the block of women from Illinois. (Courtesy Chicago Daily Tribune)

Early in the movement for women's suffrage, Wells recognized that black women were not taking advantage of their limited voting rights and that the suffrage movement itself was not inclusive.

She wanted to change that. In 1913, she founded the first suffragist organization for black women in Chicago, the Alpha Suffrage Club. But as she worked to mobilize women, she met opposition from two groups: white women, who still did not have the right to vote in all elections, and black men, who legally had full suffrage but still faced unfair voting taxes, literacy tests, and other roadblocks.

"There were white women who were very upset that black men had the right to vote but white women didn't, and there were some black men who thought that if black women could vote, that would dilute their power that would make them weaker," says Annie Logue, president of the League of Women Voters Chicago.

Wells wrote about this pushback from black men in her autobiography.

"The men jeered at [the women] and told them they ought to be at home taking care of the babies," she writes. "Others insisted that the women were trying to take the place of men and wear the trousers."

But Wells and her group persisted. She trained the women in canvassing and organized them to go door-to-door in predominantly black neighborhoods, educating other women on the political process and registering them to vote. She believed that black women could be a powerful voting bloc and could strengthen the power of the black electorate. And she was right. In 1915, a man named Oscar DePriest became the city's first black alderman. According to Wells' autobiography, women accounted for a third of the votes for DePriest. 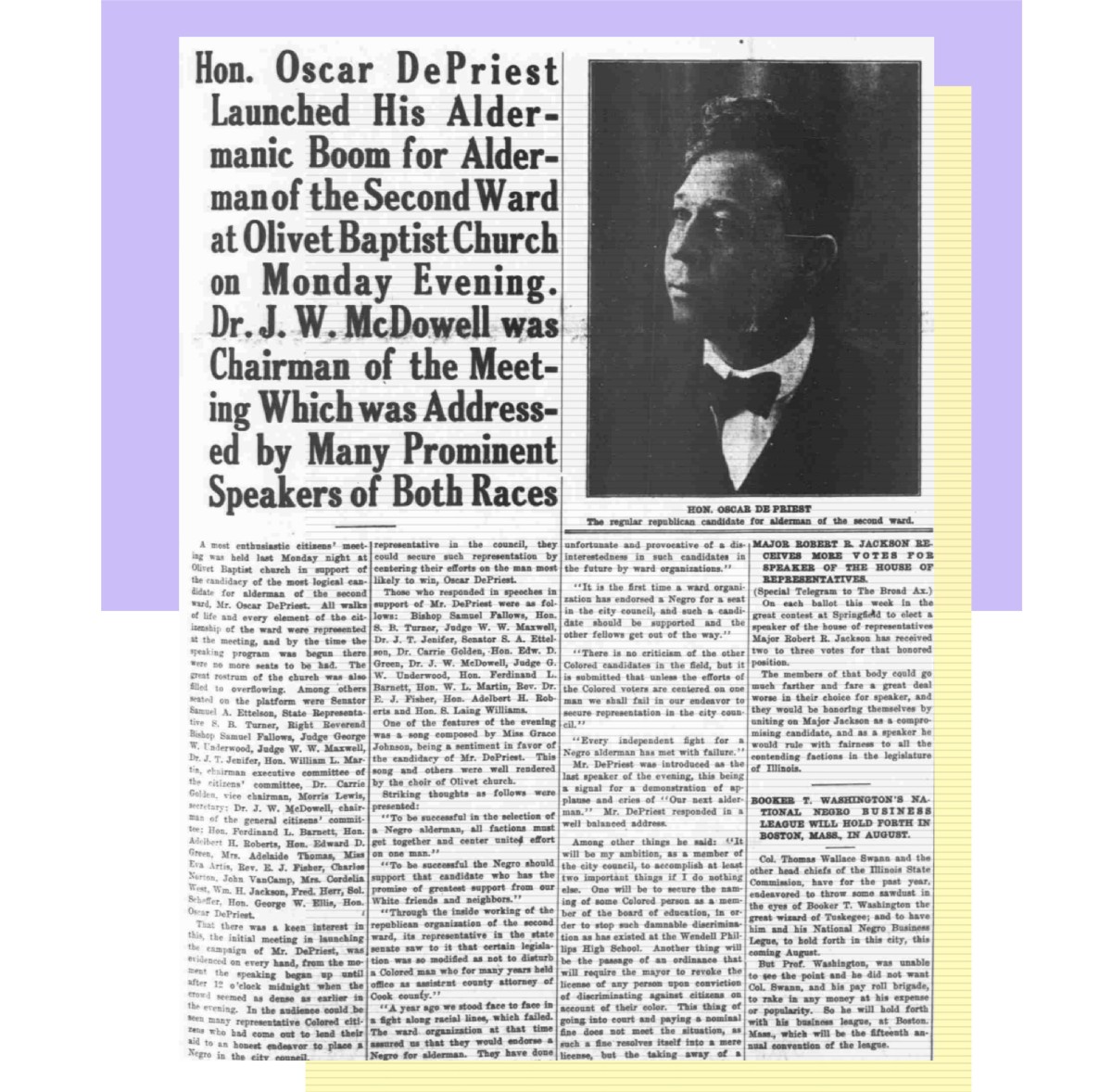 In the early 1900s, a growing number of black people moved to Chicago from the South. But when they sought support finding housing and other resources, many white institutions turned them away.

"The YMCA, the Young Men's Christian Association, did not welcome black men," says Michelle Duster, an author, educator and great-granddaughter of Ida B. Wells. "And there were all of these men that were coming up here who couldn't find a place to stay. So she decided to do something about it."

But rather than lobby those organizations to become more inclusive, Wells believed Chicago's black community could collectively help itself. So, in 1910, she created the Negro Fellowship League. The league started as a rooming house for men but became so much more: It placed black people in jobs, and hosted political meetings and social gatherings. 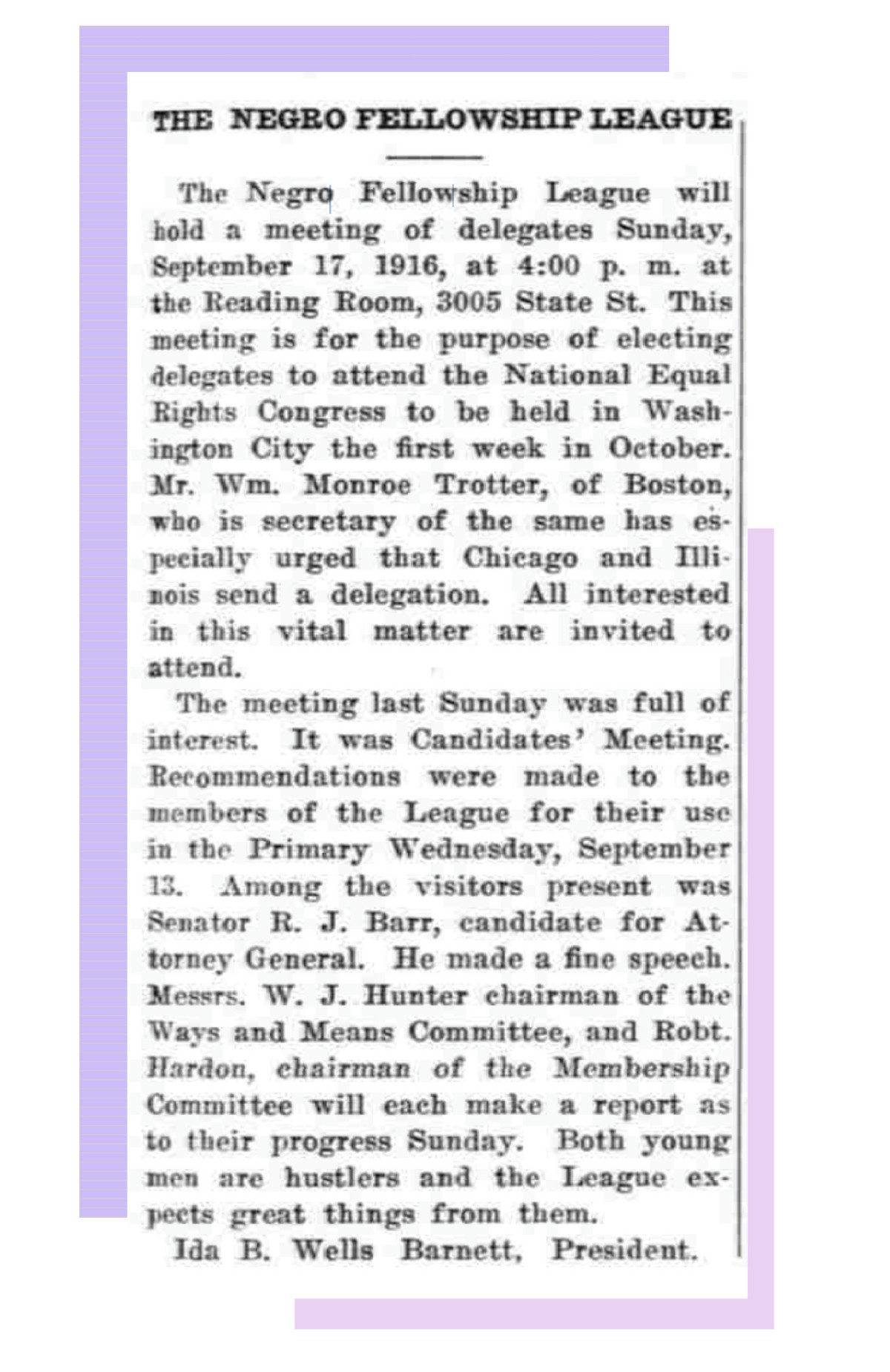 A September 1916 issue of The Broad Ax includes an announcement of a Negro Fellowship meeting. (Courtesy The Broad Ax)

However, because Wells never received the financial support from Chicago's black middle- and upper-classes that she had hoped for, she eventually funded the league's operations herself. To do that, she worked as a probation officer during the day before heading to the Negro Fellowship League in the evening, often with her children in tow. It was a brutal schedule, but one she felt was worth it.

"She [had] a vision that nobody else really wanted to support, but she believed in it enough to to do that," Duster says.

As relocation to the city ramped up during the Great Migration, even more organizations like Wells' were needed to address the demand. The National Urban League opened its Chicago office in 1916, the year the Great Migration officially began.

But Wells' Negro Fellowship League was the first to see that need and provide an answer. 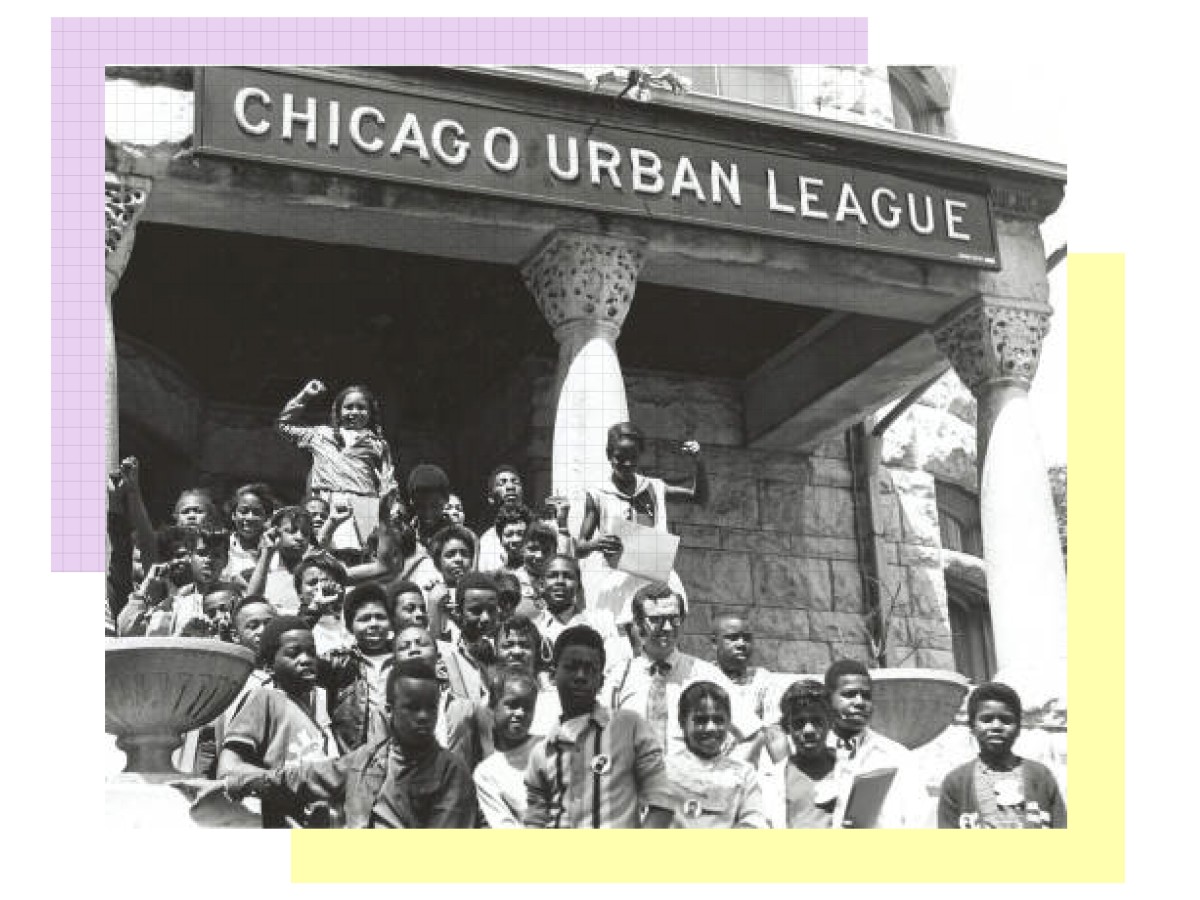 Wells worked for years as a public school teacher in her early adulthood, when she lived in Memphis, Tenn.

But when she arrived in Chicago, students in her district had only one option for private kindergarten: Amour Institute in what is now the Bronzeville neighborhood. It was open to both white and black students, but "the waiting list was such that there was little hope for many of the colored children who needed this training," Wells wrote in her autobiography.

The effort faced surprising resistance: a group of black people argued that creating a new kindergarten would make it more difficult for black children to be accepted at Armour.

But Wells, a staunch opponent of segregation, saw only a shortage of opportunities and a need.

"When her older children started getting of school age, then she recognized that black children did not have the same kind of educational opportunities as some other students," Duster says. "And so, her attitude was, 'Well since it doesn't exist, we'll create it ourselves.'"

The pioneering kindergarten opened in the lecture room of Bethel A.M.E. Church. Though it accepted both black and white children, it was the first kindergarten created specifically for Chicago's black community.

"It was indeed a happy day when we opened with a room full of children gathered from the district immediately surrounding the church," Wells wrote. "The daily papers thought the movement was so auspicious that they gave a good deal of space to the movement and credit to the club." 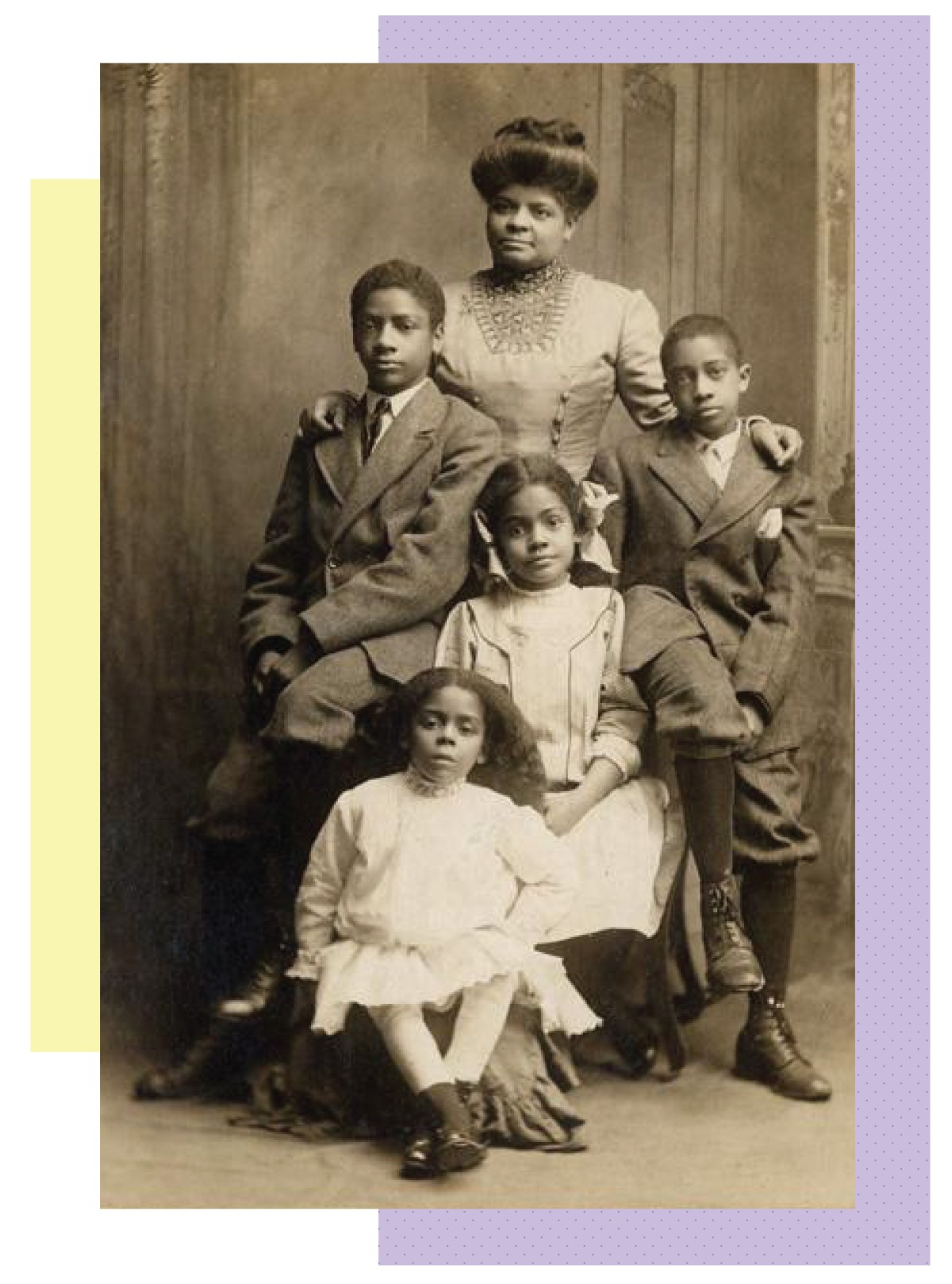 According to Wells' great-granddaughter Michelle Duster, Wells' work in education was inspired by her experiences as a mother of black children who did not have the same kind of educational opportunities as some other students. (Special Collections Research Center, University of Chicago Library)

Today, though black Chicagoans still suffer from many inequities in housing, economic opportunity, and education, the movement that Wells launched continues. And many victories have been realized.

Wells believed this type of political progress was possible in Chicago.

"Chicago, as we have said many a time before, points the way to the political salvation of the race," she once wrote in her club's newsletter, The Alpha Suffrage Record. "On only one spot on this broad United States have colored citizens demanded anything like adequate political recognition and that one spot is Chicago."

But for decades, in spite of her profound legacy, a now-demolished Bronzeville housing project was the only major city landmark to bear her name. That changed this year after a successful movement, led by her great-granddaughter Michelle Duster, to rename Congress Parkway in her honor. Ida B. Wells Drive is the first street in downtown Chicago to be named after a black woman.

"In all of the legacy that she has laid around representation and voice in truth-telling," says State's Attorney Kim Foxx. "There is something tremendously powerful about driving into the central business district and seeing her name."

For many, the street naming signifies a long overdue commemoration of Wells' contribution to the city. 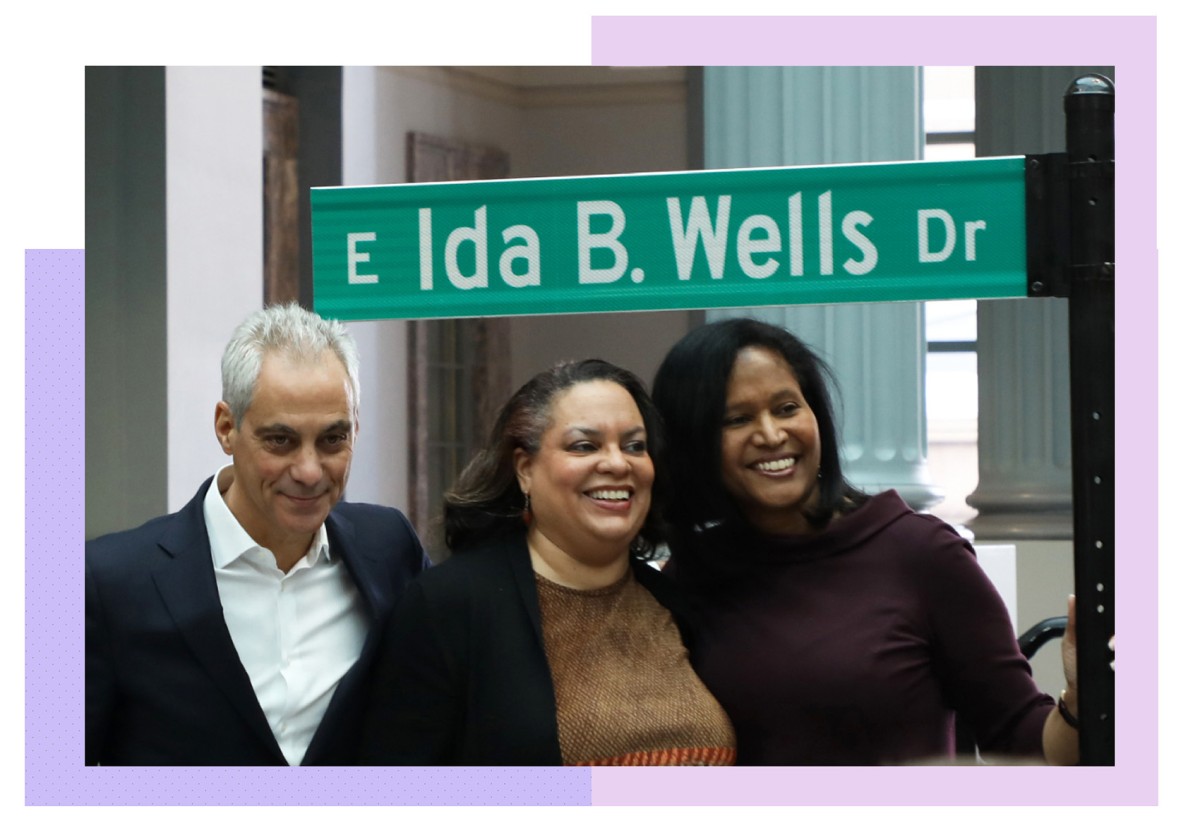 Arionne Nettles is a lecturer at Northwestern University's Medill School of Journalism and a former WBEZ digital producer. Follow her at @arionnenettles.