Accessibility links
Supermajority: A New Home For Women's Activism Reset checks in with a new women's advocacy group working to mobilize millions of women into political action ahead of the 2020 election. 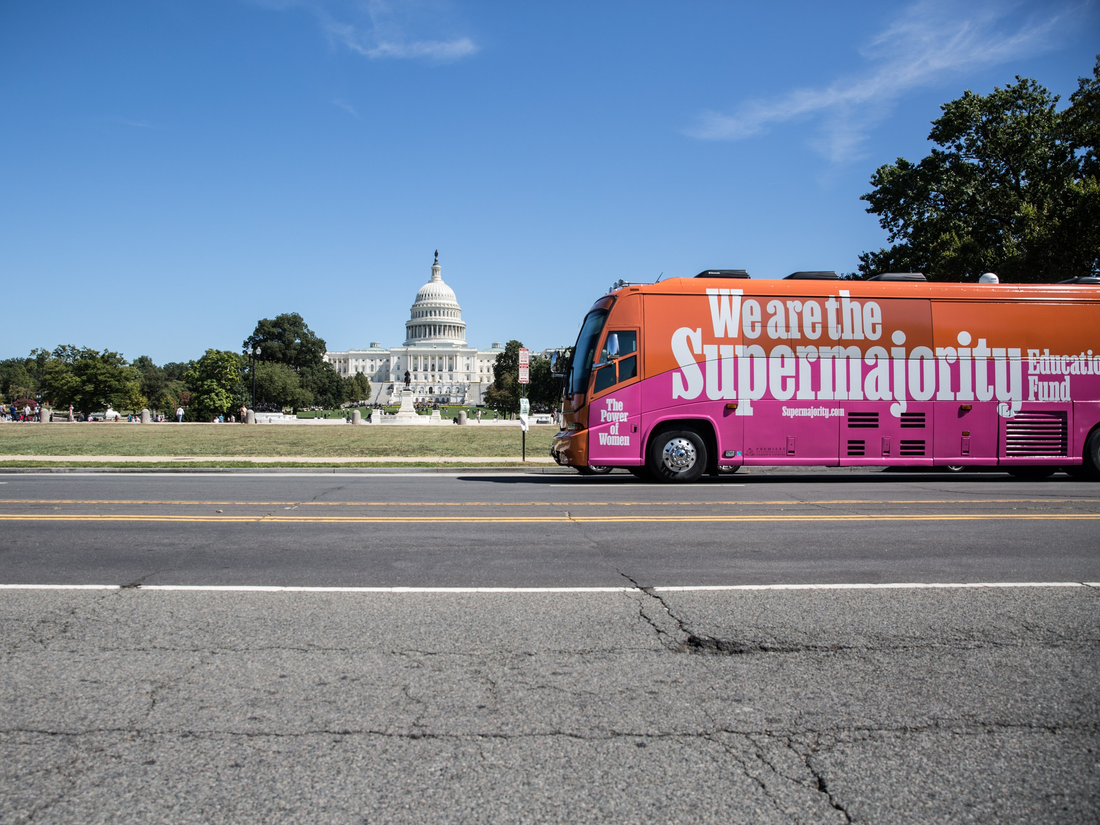 Supermajority and Supermajority Education Fund just completed a cross-country organizing bus tour that made stops in 14 states and the District of Columbia to engage women ahead of 2020. Provided photo/Lara Aburamadan hide caption

A record number of women ran for and were elected to political office in the 2018 midterm elections, but the numbers still don't reflect the U.S. population.

Founders Ai-jen Poo, Alicia Garza and Cecile Richards stopped by Reset to talk about Supermajority, a new women's advocacy organization working to mobilize millions of women into political action ahead of 2020.

Cecile Richards, former president of Planned Parenthood: There has been this incredible explosion of energy of women all across the country that started with the women's march, of course, right after the inauguration, but that fire hasn't gone out. And I think on every issue, whether it's public education, whether it's family separation, whether it's defending access to reproductive health care, women are on fire. And I feel like Ai-Jen and Alicia and I are constantly running into women who are saying, "Look, I've never been involved before as an advocate, even in politics, but I want to do more," and it seemed like a perfect time to launch Supermajority. And what we found since we launched last spring is that there are women everywhere, all over the country, who really want to play a role in changing the direction on so many issues that we're confronted with.

On building an intersectional movement

Ai-jen Poo, co-founder and executive director of the National Domestic Workers Alliance: When you think about bringing women together across race, age, class and experience, it is an incredibly powerful force. ... We're the majority of the electorate ... and yet we've never fully been able to harness that power to achieve true equality. ... We're still treated as a special interest group, right? In many ways, our [are] issues sidelined and treated as kind of minority or narrow self-interest groups or issues, and so the way to really unlock this potential power is really to build that connection and that home for all of us across all of these different experiences. And what we found is that that is exactly what women want, regardless of the community that you go into.

Alicia Garza, Black Lives Matter co-founder and principal at Black Futures Lab: Just like women are not a monolith, black people are not a monolith. ... One of the things I'm so excited about in relationship to Supermajority is that we really do take the time to better understand what women are experiencing across a number of different positions in their lives. We all know that, for example, black women are impacted by the wage gap in different ways than white women or Latinx women. But yet, if we have some clarity around where those things are different, we can actually come up with better policy and better practice together about how to not leave anybody behind. And that's really what intersectionality is about, and that's very much what Supermajority is about.

Richards: This is a moment, I think, for women to realize their power, realize the power of women standing with other women on the issues that we care about and that do unite us. So to me, having a November 2020 be the year that women actually band together and vote together, it'll determine not only what happens in 2020, but I think for the next century in this country.

Garza: I think success for me looks like in 2020 that women have had the final say. I think a lot of us feel like 2016, we were robbed of our shot. So in 2020, I really want us to feel like there has been a rematch and that women prevailed.

Poo: To me, we're in this moment where it's not even just about getting a little bit more of our share of the existing pie. We really do want to rewrite the rules fundamentally. ... We actually want equality on our terms, in our values in a way that's truly reflective of who we are and what we deserve in this country.