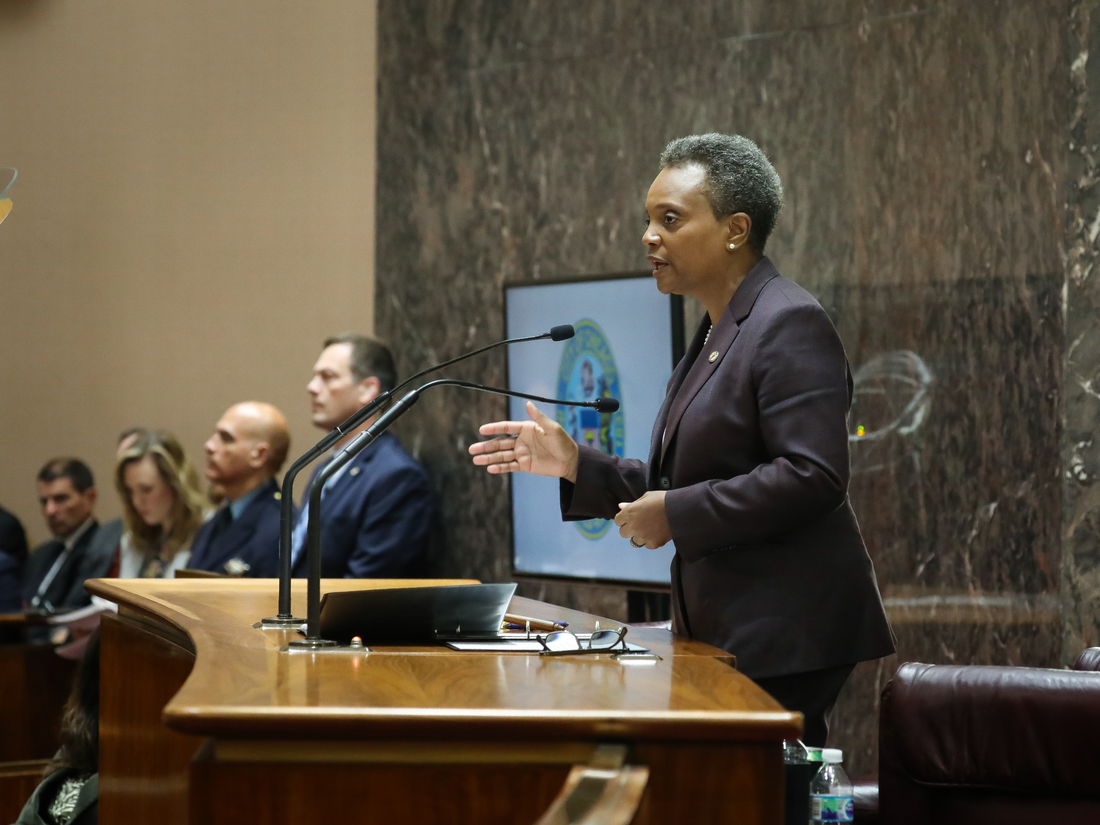 Chicago aldermen approved Mayor Lori Lightfoot's 2020 budget on Tuesday by a vote of 39 to 11.

The $11.65 billion budget, which takes effect at the start of 2020, represents a nearly $1 billion increase over this year's budget. Part of the jump is due to spikes in state-mandated payments to the city's pension funds.

The dissent represented in the final votes is a departure from the past, when mayors have enjoyed unanimous or nearly-unanimous "rubber stamp" votes on their budgets. Eleven aldermen voted against the budget appropriations ordinance, and 14 voted against the tax levy portion of the budget.

The last time a budget was this divided was in 2015 when the City Council voted for a phased-in, four-year property tax increase.

"We have a different City Council," said Ald. Pat Dowell, chair of the budget committee. "The mayor has often said that she's not looking for a rubber stamp City Council."

Lightfoot's plan to close a projected $838 million budget deficit relies, in part, on a property tax hike for the public libraries, higher taxes and fees on ride-share trips and restaurant bills and a one-time, $215 million windfall from refinancing the city's debt. The budget also includes a provision to increase the city's minimum wage to $15 an hour by 2021.

Six aldermen who declare themselves as Democratic Socialists released a statement earlier Wednesday explaining why they would be voting no on the mayor's budget. Some of their reasons include: an over-reliance on property taxes, an "overfunding" of police and the new minimum wage that leaves out tipped workers, such as restaurant servers.

"The city sent a message with hiring Democratic Socialists and hiring a black woman LGBT mayor and so they want to see a change and us voting yes to this [budget], that's not that change," said freshman Ald. Jeanette Taylor, 20th Ward.

"Rahm [Emanuel] and [Richard M.] Daley were never really challenged," Taylor said of previous mayors. "This says to [Lightfoot], 'We're coworkers.' I don't work for her. I work for the citizens. And if we're co-workers then we need to sit together and have some conversation about what could happen."

In August, the mayor took to prime-time television to tell Chicagoans the city was facing the $838 million shortfall. She also raised the specter of imposing a significantly larger property tax hike, which she suggested depended on getting help from state lawmakers in Springfield to enable a Chicago casino. She also wanted the General Assembly to let the city enact a higher real estate transfer tax on the sales of high-priced homes.

When she released her budget proposal in October, some aldermen criticized Lightfoot for her reliance on help from state lawmakers.

Lightfoot traveled to Springfield during the veto session earlier this month, but did not get permission to tax expensive home sales or changes to state law that would make a Chicago casino viable.

Ald. Anthony Beale, 9th Ward, also voted no on the 2020 budget. His main concerns had to do with relying on money from the state and federal government that has yet to be approved.

"This is not a balanced budget; this is a budget with a lot of holes that are going to have to be filled at a later date," Beale said, calling the newly-seated City Council a "go-along body."

Lightfoot's 2020 budget doesn't bank on casino money, and the $50 million Lightfoot projected to come from a graduated real estate transfer tax is based on a June effective date, so there is a chance she could still get approval from state lawmakers when they reconvene in the spring.

Despite all the talk about avoiding property tax increases, Chicago homeowners will see bigger tax bills in 2020. City officials estimate owners of an average $250,000 home will see their tax bill go up by $46. The new revenue will go toward fixing city infrastructure and reinstating Sunday hours at the public libraries.

The mayor did make some adjustments to her initial proposal, like reducing the growth in her own office's budget from $3.8 million to $2.5 million. The changes came after two weeks of budget hearings and after the state veto session came to a close without any help for Chicago.

But many aldermen are still raising concerns about the $163 million Lightfoot is expecting to come from higher insurance reimbursements for city ambulance services.

"We have no reason to believe that it won't be approved and fulfilled," said Ald. Brendan Reilly, 42nd Ward, in response to criticism that the mayor's plan.

Another controversial piece of the 2020 budget is the plan to increase fees on solo ride-share trips with companies like Uber and Lyft. The city will also add a surcharge for rides that go into and out of downtown during certain hours. The ride-sharing fees and surcharges are expected to raise $40 million in revenue next year.

One less-talked-about part of the 2020 budget that will hit people's pocketbooks is an increase to downtown parking meter rates. The hike is being implemented in order to make what's known as a "true-up payment" to Chicago Parking Meters LLC, the private company that leased the meters in 2008.

The city will also increase its sales tax for all food and beverages purchased at restaurants and retail establishments. That would amount to an additional $0.25 on a $100 bill. The move is forecast to rake in $20 million for the city next year.

The city's budget gap grew significantly this year due to an increase in the required annual payments City Hall needs to make to two of the city's four pension funds. In all, the city will pay nearly $1.7 billion to its four pension funds. The city's pension debt — and its annual deficit — is expected to continue growing. In 2022, the required payments will jump again when the city has to start making larger payments to all four funds.