Accessibility links
Unaccompanied Minors Crossing The Southern Border Are On The Rise Some migrant parents send their children across the border without them to escape harsh living conditions. They ask: "What would you do?"

4:27
Unaccompanied Minors Crossing The Southern Border Are On The Rise 4:27 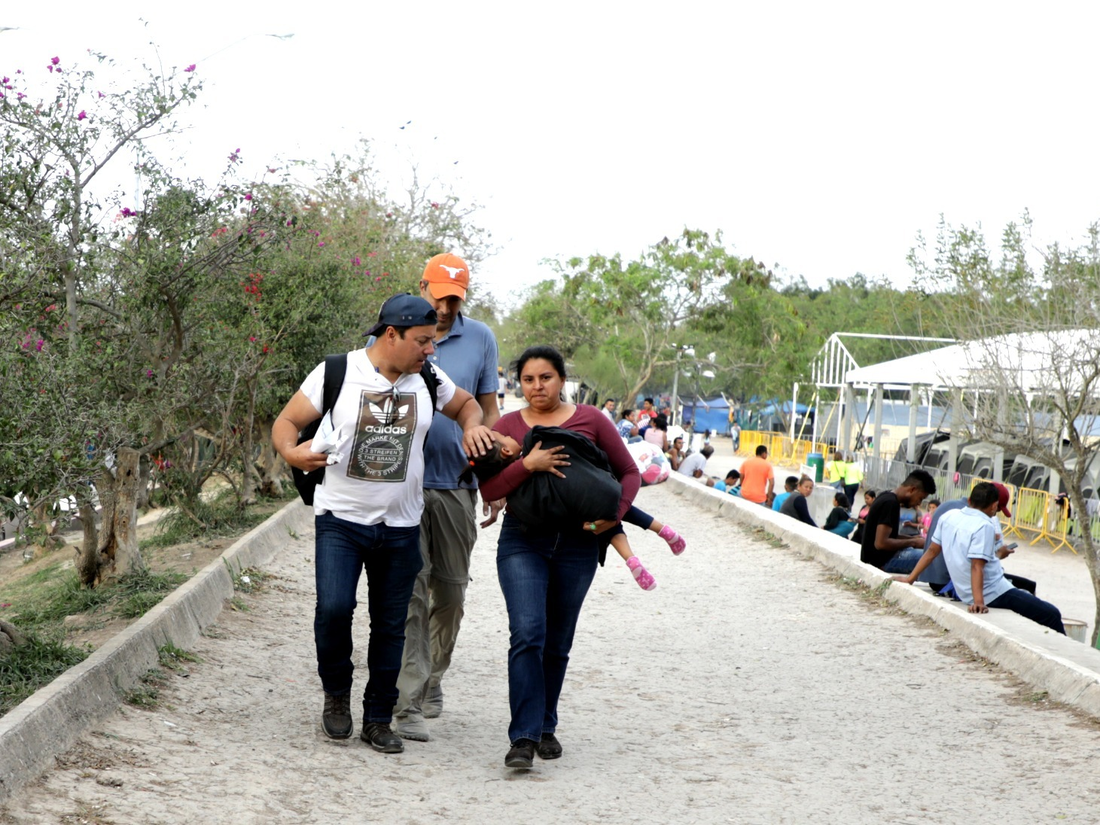 A mother carries her unconscious daughter out of the migrant camp in Matamoros, Mexico. The young girl is septic from a kidney infection. A nonprofit pays for cabs to transport individuals with severe medical cases out of the camp. Ambulances don't come to the camp. Maria Ines Zamudio/WBEZ hide caption

When Ana Sanchez arrived in Matamoros, Mexico, with her four children, she didn't think she'd be there long.

Sanchez is from El Salvador. She came to the border town — which sits just across the Rio Grande River from Brownsville, Texas — to seek political asylum in the U.S.

Due to the "Remain in Mexico" policy, which was first implemented about a year ago, Sanchez is forced to wait in Matamoros for her hearings as her asylum case moves through immigration court.

She's been living there in a tent with her children for six months.

"I would hear my children crying in the tent," Sanchez said in Spanish.

Her three-year-old daughter regularly got sick. She was diagnosed with pneumonia, diarrhea, and even chicken pox. Then after her most recent court hearing in Brownsville, Sanchez was sent back to the tent city. That's when she decided to take a drastic move — one that many migrant parents are making.

She walked her four children — ages 15, 12, 6 and 3 — to the international bridge connecting Matamoros and Brownsville and watched them cross the border alone, as unaccompanied minors. The children were housed in a detention center and, later, in a shelter for a month. They are now living with their father in Houston.

Sanchez said the children are doing much better. Three of them are enrolled in school, and they are all healthy.

"Every morning when I wake up and every evening when I go to sleep, I think about them," she said. "Maybe they don't think about me, but I hope one day they will understand why I did this." 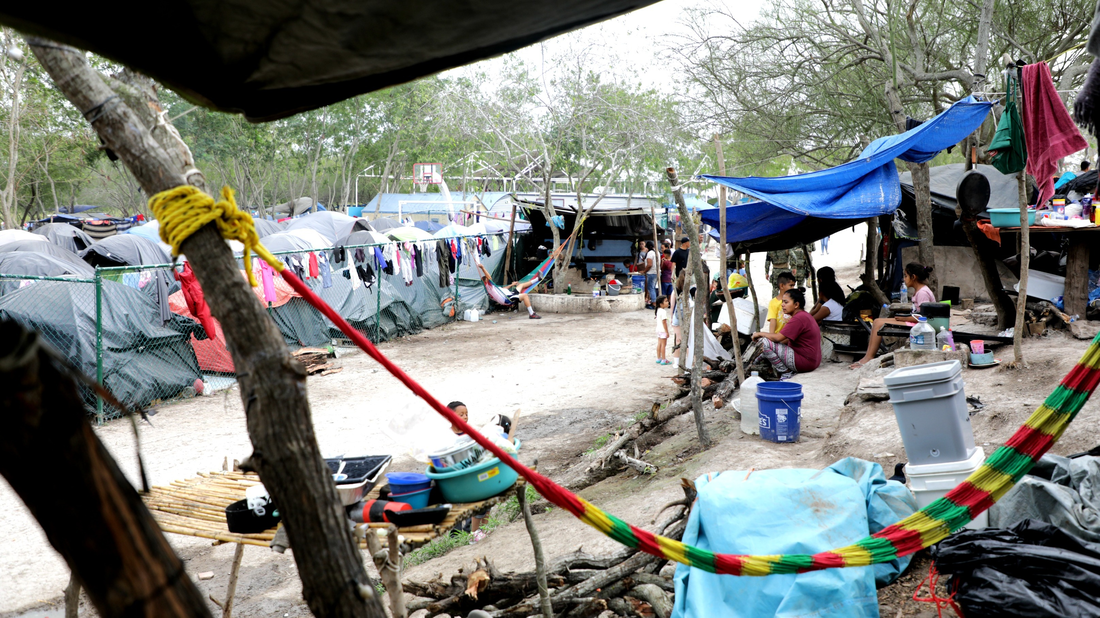 Thousands of asylum seekers have been living in a migrant camp in Matamoros, Mexico for months because they have to wait there for their asylum court hearings. The camp is without running water or working toilets. Maria Ines Zamudio/WBEZ hide caption

Thousands of asylum seekers, like Sanchez, have endured poor living conditions for months in Matamoros. The camp is without running water or working toilets. When it rains, it gets so muddy that migrants have to walk barefoot because their shoes get stuck. And those conditions have been especially difficult for kids.

Helen Perry, executive director for Global Response Management, a nonprofit providing free medical care in the camp, said her volunteer doctors treat about 50 patients each day and half of those are children.

"About 50% of the patients that we treat here have some type of respiratory illness," Perry said, "and that's everything from severe asthma attacks — yesterday, with a child that needed to be intubated — to bronchitis, pneumonia ... anything to do with with upper and lower respiratory infections."

Perry said 25% of the patients have gastrointestinal problems. "We see ... nausea, vomiting, diarrhea," Perry said, "either from infectious diarrhea or gastrointestinal symptoms from influenza or bathing in the river and getting some contaminant, e-coli or something like that."

On a recent Thursday, a mother carried her unconscious daughter out of the camp and got into a cab. She was accompanied by a volunteer doctor. The young girl was septic from a kidney infection. They were taking a cab to the local hospital because ambulances don't come here.

"The reality is that we have a refugee camp currently at the U.S.-Mexico border," Perry said. "That's unprecedented in our history."

She said the volunteer doctors and other staff try to do the best they can with limited resources. But they've seen patients who've had heart attacks and cancer. Teresa and her 13-year-old son had lived in the migrant camp in Matamoros, Mexico, for four months. "Mom, I don't want to be here. We're suffering here," Teresa said he told her. Earlier this month, Teresa sent him across the border alone as an unaccompanied minor. He's now living in a shelter in New York. She hopes that he will be released soon to live with an uncle in Virginia. Maria Ines Zamudio/WBEZ hide caption

WBEZ interviewed many parents in the Matamoros camp who sent their children across the border alone as unaccompanied minors. And other parents planning to do the same.

Many of them didn't want to be recorded because they fear being judged. They all said they've struggled with making that decision but feel they don't have any other choices. They said they are losing hope of getting into the U.S. and seeing their kids getting sick and not being able to go to school is too much to handle.

Due to the dire conditions, an increasing number of parents are sending their children across the border alone, creating a new form of family separation.

The number of unaccompanied minors crossing the border in the Laredo region, which includes Brownsville, has increased by 21% from fiscal year 2019 to fiscal year 2020, according to U.S. Border Patrol.

And in the camp, the conversation of whether to send children alone is common. A flier posted in one of the temporary wooden showers reads: "Please don't let anyone convince you about what you should do with your child. Talk to an expert to know what will happen to your child, if he crosses alone and consider your options very closely." 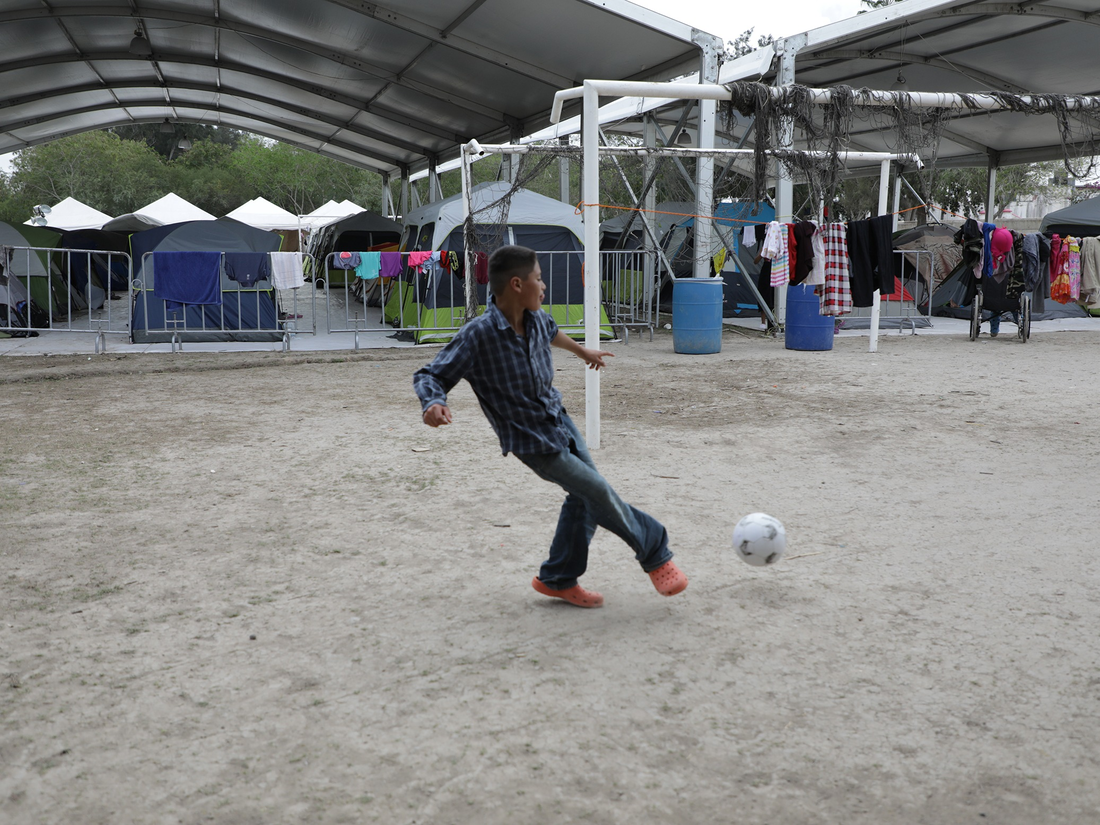 Children play soccer at a migrant camp in Matamoros, Mexico. Thousands of asylum seekers have been living in the camp for months because they have to wait there for their asylum court hearings. Children there don't have access to school. Maria Ines Zamudio/WBEZ hide caption

Last year, a congressional report revealed that — each year from fiscal years 2015 to 2018 — at least 1,000 allegations of sexual abuse were reported by immigrant children while in government custody.

Not only that but at least seven children died while in custody last year. One of the youngest was Mariee Juarez, a one-year-old child who died from complications of a respiratory illness, NBC news reported.

Most of the parents interviewed by WBEZ said they didn't know about the reports of sexual abuse or the deaths. But even after they learned about those tragic consequences, they asked whether it was better to keep them in Matamoros, for months — if they kept getting sick, they couldn't attend school, they couldn't play freely without fear and they couldn't return to their home country — or to send them across the border alone.

"What would you do?" they asked.