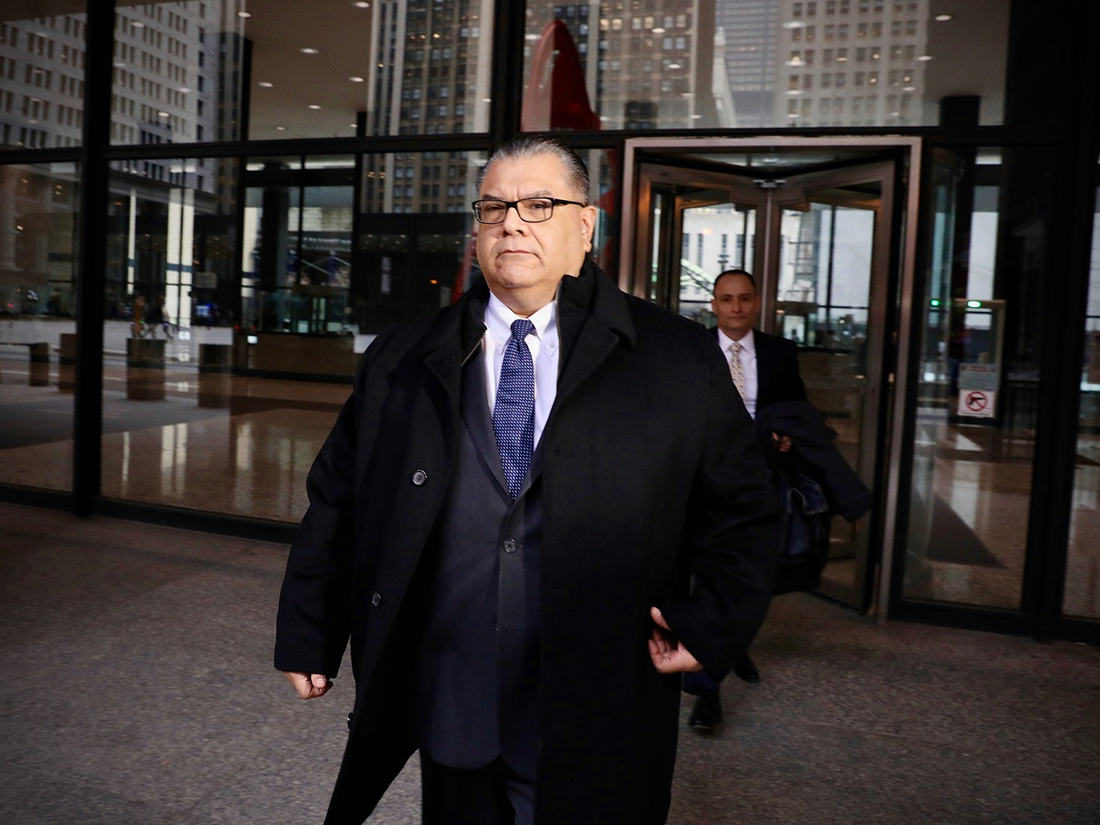 Caught on tape saying he would go "balls to the walls for anything you ask me," former Illinois state Sen. Martin Sandoval pleaded guilty Tuesday to federal bribery and tax evasion charges tied to his support of the red-light-camera industry.

The longtime Chicago Democrat's plea guarantees his cooperation in a criminal investigation into influence-peddling and legislative favoritism that could involve some of Springfield's most powerful lobbyists and special interests. Those include red-light camera companies, video gambling operators and electric utility giant Commonwealth Edison.

In court on Tuesday, Sandoval confirmed that he took more than $250,000 in bribes. According to his plea agreement, Sandoval also admitted to engaging in "corrupt activities with other public officials and accepted money from other people."

"Your honor, I accepted money in exchange for using my office as a state senator to help SafeSpeed," Sandoval told the judge, referring to the red-light camera firm.

"I take full responsibility for my actions," Sandoval later told reporters. "I'm ashamed. I'm sorry. I want to apologize to the people of Illinois, to my constituents. I intend to fully cooperate with the government."

As part of his guilty plea, Sandoval also agreed to pay more than $85,000 to the IRS and the Illinois Department of Revenue.

U.S. Attorney John Lausch sat in the front row of the courtroom for Tuesday's hearing.

Sandoval represented the Southwest Side and several southwest suburbs since 2003 until he resigned his seat on the first of the year. He once was the influential chairman of the Senate Transportation Committee and a member of former Senate President John Cullerton's leadership team.

But on Tuesday, Sandoval admitted to accepting bribes for what prosecutors contend was his "continued support for the operation of red-light cameras in the state of Illinois, including opposing legislation adverse to the interest of the red-light-camera industry."

According to his plea agreement, Sandoval was secretly recorded discussing how he could accept the payments an unspecified Company A, which he revealed to be SafeSpeed during Tuesday's hearing.

In conversations with a government informant that were revealed in his plea deal, Sandoval touted his ability to be the company's "protector" in the state Senate and voiced resentment that others were making more money than him from the red-light camera operator.

"[You] know I'll go balls to the walls for anything you ask me ... It's hard for me to swallow how [people] make so much off of you. Right? And I gotta do the work," Sandoval said.

When the subject turned to how much money he should get and how payments should be structured, Sandoval turned coy.

"I can't say. It would have to come from you," Sandoval told the informant, who was not identified in court documents. "That's just not my style."

The cooperating witness asked, "Just off the top of your head, what pops into your head?"

Through September 2019, the plea agreement said Sandoval accepted about $70,000 in bribes under that $5,000-a-month arrangement. And all told, he took more than $250,000 in bribes that involved more than five individuals, the plea document said.

The former senator admitted to having "engaged in corrupt activities with other public officials and accepted money from other people in return for using his position as an Ilinois state senator to attempt to benefit those people and their business interests," the plea document said.

Sandoval also admitted to filing a false income tax return in 2017, deliberately under-reporting his income that year. He reported $125,905 in income when his true income "substantially exceeded that amount," according to prosecutors.

In a statement, a spokesman for the SafeSpeed red-light camera said the company is "shocked and saddened" by the crimes.

"We are shocked by the information in today's plea agreement and the betrayal of public trust both by Sen. Sandoval and a person who had an interest in the company, who was not authorized by the company to engage in any illegal behavior or make any commitments or contributions on behalf of the company or its executives," SafeSpeed spokesman Dennis Culloton wrote in an email to WBEZ.

The sentencing range for Sandoval's crimes is roughly 10 to nearly 13 years in prison, according to prosecutors. But his sentencing date has been pushed off until late July, indicating Sandoval will have time to sing in a federal investigation that still has a long way to go. And there is some chance that sentence could be reduced, depending on Sandoval's level of cooperation, prosecutors said.

Sandoval was released on a $10,000 bond and banned from leaving the state.

After Sandoval's hearing, reporters asked Lausch why public corruption like what Sandoval admitted to continues to flourish in Illinois.

"What I will say is it's a very stubborn problem we seem to have here in Illinois," he said.

Sandoval had his state Capitol office and home raided by federal agents in late September.

The feds' interest in those entities and people only became public after a WBEZ lawsuit that challenged Cullerton's efforts to shield them from public view. His office blocked the release of a fully unredacted search warrant and documents that compiled what federal agents seized from Sandoval's statehouse office in late September.

Lausch wouldn't comment on other parts of the wide-ranging federal probe that's cast a shadow over the state capitol, including whether ComEd or Exelon engaged in wrongdoing or whether Democratic House Speaker Michael Madigan is a target.

"Not able to comment on parts of any other investigations that we have other than what's set forth in this plea agreement," Lausch said.

Dave McKinney and Tony Arnold cover state government and politics for WBEZ. Follow them on Twitter @davemckinney and @tonyjarnold.

Dave McKinney and Tony Arnold cover state government and politics for WBEZ. Follow them on Twitter @davemckinney and @tonyjarnold.