Accessibility links
Chicago's 'Dibs' Tradition Can Get Dirty, And Even Dangerous Police records show that dibs disputes have led to everything from broken mirrors to life-threatening acts of retaliation. 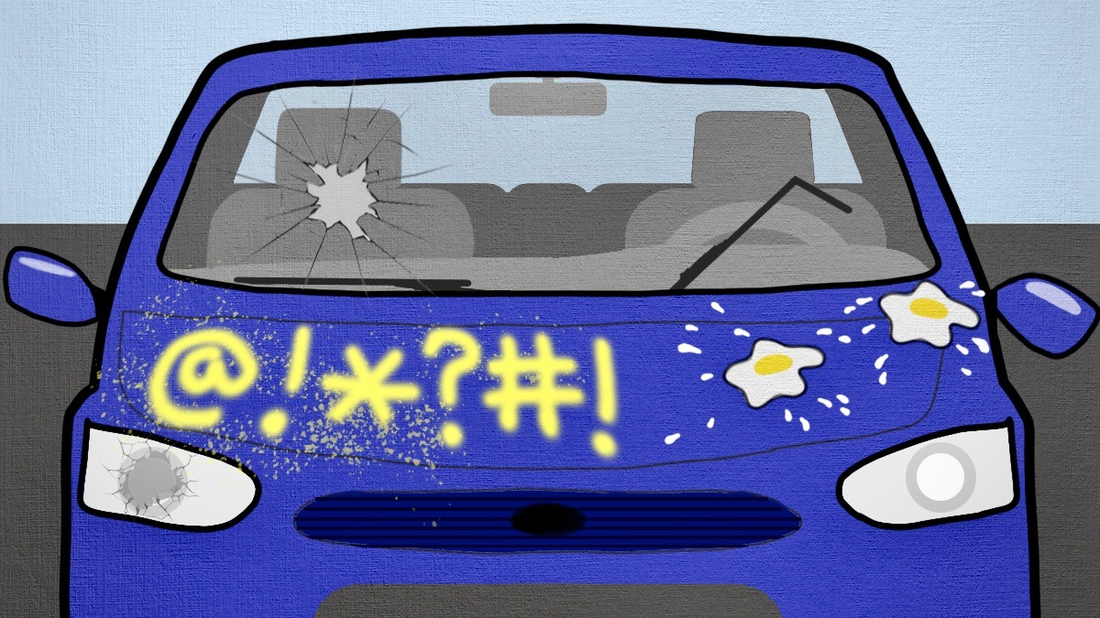 Earlier this winter we answered a question from curious citizen Jason Misuinas about the history and ethics of dibs — the practice of shoveling out a parking spot and then "saving" it with something like a lawn chair or a piece of plywood.

We found that dibs is not legal in Chicago, but has been tolerated — and even endorsed — by Chicago mayors for at least 50 years. Why? Some speculate that our leaders have appreciated the free street shoveling done by dibs-seeking citizens so much that they've turned a blind eye to the practice.

Some mayors have even openly endorsed the practice and joked about the tradition.

But folks like Jason didn't think it was all that funny — especially the strife dibs can spark between neighbors.

"I mean, what do we want ... people to keep fighting with each other over parking spots?" he asked.

Which raised another good question: Does dibs really cause serious strife, even measurable damage? To find out, we requested records from the Chicago Police Department, and they revealed that dibs isn't always harmless. In fact, the records show that dibs disputes have led to everything from passive-aggressive Instagram posts to life-threatening acts of retaliation.

The records didn't arrive in time for our initial story, but we're presenting them here to offer the first public look at what happens when dibs gets dirty.

We reached out to the Chicago Police Department and requested all reports of criminal damage to vehicles for the week following three big February snowstorms: in 2011, 2015 and 2018. We further narrowed those reports to those containing the words "snow," "shovel," "parking space" or "dibs" in the narratives. Here's what we found happened during those three weeks:

Dibs is all over the map

The three weeks of data show dibs related retaliation incidents occurring in all parts of the city. However, more were reported on the North Side and in neighborhoods with very limited residential street parking.

What else did we learn from the police data?

Here are some standout examples, which have been edited for clarity:

Many of the victims said they were unaware of Chicago's "dibs" tradition when parking their cars.

"Victim parked his car on the street. When he returned to his vehicle, he saw the tires had been slashed. Victim is not from Chicago and did not know that it is common for Chicagoans to hold a spot in this manner."

Some of these retaliatory acts take place when people park for just a few minutes.

"Victim related that he parked his vehicle down the street from Acero Elementary to get his child into school. He moved some boxes that someone had put there after shoveling out a parking space. Victim stated that he had every intention of putting them back after dropping off his child. Unknown offender had spray painted the door handles and rear license plate."

Some vehicle damage was life threatening.

"Victim, upon returning to vehicle, discovered the brake lines had been cut. Victim does not know who did it, but thinks it was due to the limited number of parking spots caused by the snowstorm."

Some offenders allegedly posted about their crimes on social media.

"Victim discovered rear passenger tire slashed ... [and] stated that she parked her vehicle where someone had shoveled out a parking space, but the chair was on the sidewalk. Victim told responding officer that [alleged offender] posted on Instagram a picture with a knife stuck inside the tire, [writing] 'The struggle is real. People want to be disrespectful and careless of others' hard work. Going to happen to your f***ing tires.' "

We brought this information to Laurence Msall, president of the public policy research group The Civic Federation. To him, it's further evidence the city needs to take responsibility for plowing side streets rather than farming it out to citizens.

"Clearly it is not the best practice to have people arguing over whether I was the one who shoveled or you were or someone in my family. We'd be better off having a schedule for people to move their cars [to one side of the street] after a snow storm for plowing," he says.

That is how it works in Minneapolis, where officials say they are able to clear all streets within 48 hours.

Msall says he doesn't know if we can ever stop people from fighting over parking, but he said the police don't need a policy that may just contribute to more crime. "Clearly we don't have enough [police] to handle the level of violence that is already occurring."

Monica Eng is a reporter for Curious City. You can follow her @MonicaEng.