Accessibility links
To Kim Foxx's Core Supporters, The Jussie Smollett Scandal Is A Distraction Advocates who helped elect the state's attorney say Smollett is small fry next to the Jon Burge torture scandal of prior administrations.

4:15
To Kim Foxx's Core Supporters, The Jussie Smollett Scandal Is A Distraction 4:15 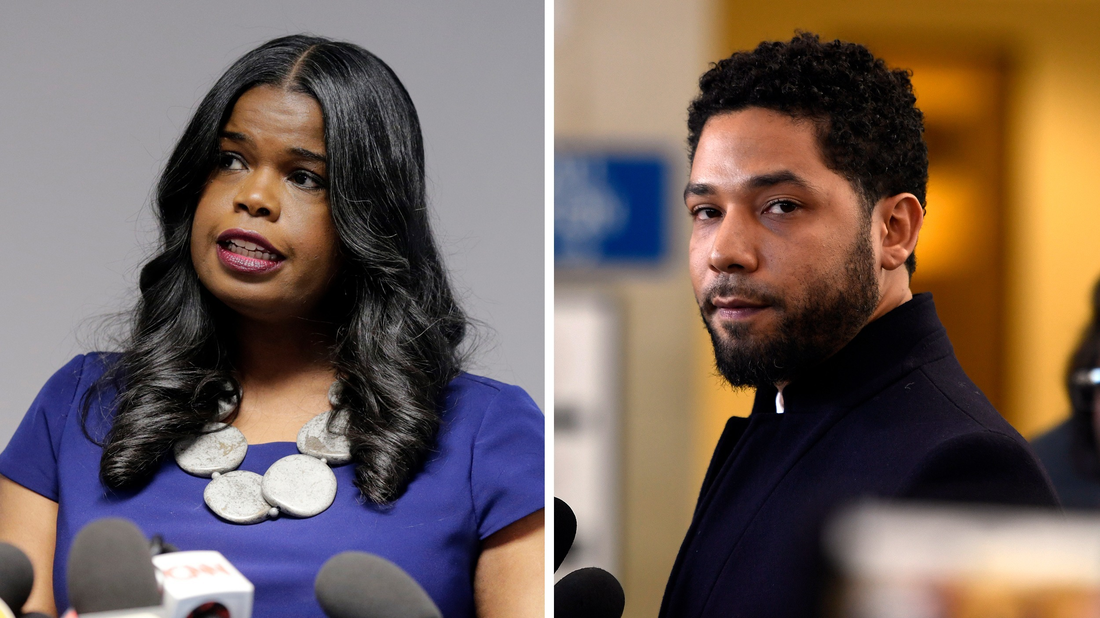 In the Democratic primary race for Cook County state's attorney, the three candidates trying to unseat Kim Foxx (left) keep hammering her on how she handled the case of Jussie Smollett (right). As the March 17 primary approaches, however, the actor's case does not seem to be having a big impact on the criminal justice reform advocates who helped elect her in 2016. Photos by /Associated Press hide caption

In the Democratic primary race for Cook County state's attorney, the three candidates trying to unseat Kim Foxx keep hammering her on how she handled the case of TV actor Jussie Smollett.

"You should have gotten up in front of the public and said, 'Here's why I dropped the charges,' " lobbyist and former federal prosecutor Donna More told Foxx in January during a Chicago Tribune candidate forum that focused largely on the celebrity's case.

Despite all the attention on Smollett, however, the actor's case does not seem to be having a big impact on Foxx's main support base as the March 17 primary approaches, according to WBEZ interviews with more than a dozen criminal-justice reform advocates who helped sweep her into the office four years ago.

"Jussie Smollett doesn't affect people's lives in the way that the real reforms that Kim Foxx has made in her first term in office ... have affected people's lives," said Amisha Patel, director of Grassroots Illinois Action, a group that backs progressive causes and candidates.

"For us it was a no-brainer to endorse her once again," Patel said. "Our people don't care about this actor. They care about their families and neighbors on their block and they care about what's happening as people interact with the criminal justice system in Cook County."

Smollett was accused of staging a hate crime against himself and reporting falsely about it to police in January 2019.

Foxx said she tried to help Smollett when she thought he was a victim.

When he became the suspect, she publicly recused herself from the case but, privately, continued to influence it.

Then her office abruptly dropped disorderly conduct charges against him last March, prompting national headlines and condemnation of Foxx, especially by police officers who had spent a lot of time investigating the alleged hoax.

A Cook County judge appointed a special prosecutor to reexamine Smollet's conduct and the actor's handling by Foxx's office.

A special grand jury last month indicted Smollett on charges similar to the ones Foxx's office had dropped. The special prosecutor's investigation into Foxx's office continues.

Foxx, meantime, has faced relentless attacks about Smollett from her Democratic primary challengers.

But those attacks do not seem to be having an impact on the reform advocates, who range from groups that knocked on doors for Foxx in 2016 to Black Lives Matter activists whose "Bye Anita" campaign hounded then-incumbent Anita Alvarez in the weeks before the Democratic primary that year.

Crista Noel, a founder of Women's All Points Bulletin, said it was "a little shady" when Foxx recused herself and later let Smollett walk away "without having to say that he did anything wrong."

But Noel, whose group focuses on police violence against women, said the decision to drop the charges was ultimately consistent with Foxx promises to steer nonviolent offenders away from incarceration.

Noel and other activists who supported Foxx in 2016 said they do not think so.

They also characterized the Smollett case as insignificant compared to other responsibilities of the state's attorney's office, such as prosecuting murders and sexual assaults, addressing mass incarceration, recognizing and reversing wrongful convictions, and expunging marijuana convictions now that Illinois has legalized the drug's recreational use.

Anti-violence activist Camiella Williams said Foxx's mishandling of the Smollett case is also nothing compared to how previous state's attorneys turned a blind eye to injustices such as the torture of African American suspects under the late police Cmdr. Jon Burge.

"This Jussie Smollett situation is pure irrelevance to people who are impacted by gun violence every day, that are traumatized, that have PTSD," Williams said. "I'm one of them."

Sun-Times columnist and ABC7 analyst Laura Washington is not surprised that criminal justice reformers are sticking with Foxx despite the primary campaign's focus on Smollett.

"The people who have benefited most from her policies are people of color in low-income communities," Washington said.

The voters most likely to be swayed by the Smollett talk, Washington added, are "very comfortable" and primarily white and middle-class — people who do not have much contact with the criminal justice system.

"People who don't live in the communities and don't connect with the communities where the crime and injustices are happening," Washington said, "have a right to be angry about the bungling of this case but they are not living those injustices."

These are the voters that Foxx's challengers need to turn out, Washington said.

"If Kim Foxx loses this race," she said, "it's going to be because of Jussie Smollett."