Accessibility links
Are Native American High School Mascots On Their Way Out In Illinois? A bill to make it harder for Illinois schools to have Native American mascots is making its way through the state legislature.

Are Native American High School Mascots On Their Way Out In Illinois?

Are Native American High School Mascots On Their Way Out In Illinois? 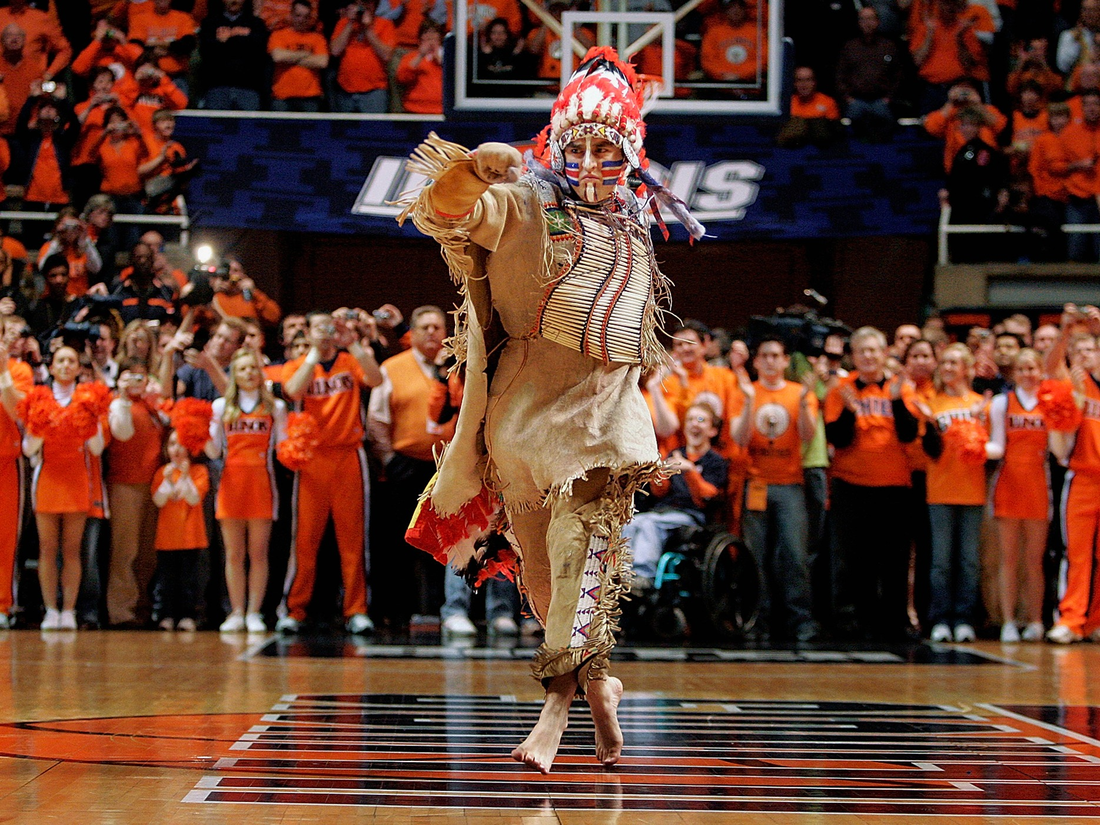 University of Illinois mascot Chief Illiniwek performs for the last time in Champaign, Ill., Wednesday, Feb. 21, 2007, during Illinois' basketball game against Michigan. The team retired Chief Illiniwek as a mascot that year. But the school kept the name of the Fighting Illini. Seth Perlman/Associated Press hide caption

A bill introduced in the Illinois House would require high schools that want to continue using Native American mascots to follow several new steps or risk being ineligible for sports playoff games.

The bill got a first pass Wednesday in an education committee hearing in Springfield. But, changes already are being made to the measure.

The original proposal, HB4783, called for schools to get written consent from a Native American tribe based within 500 miles of the school. But before the legislative committee on Wednesday, bill sponsor Rep. Maurice West, D-Rockford, said he recognizes that would be a burden for schools and he wants to include input from Native American groups.

"I really believe if we step away from this language and create this commission, that's the way we give the Native American community their strongest voice," West said at the hearing.

West wants to create the Native American Tribal Commission of Illinois. The governor would appoint members from federally recognized tribes. West said the commission would create the rules, and it would approve or deny schools on a case-by-case basis.

West said 52 high schools in the state would be affected. This includes Lane Tech College Prep in Chicago. He said he's focusing on high schools because the list gets enormous when elementary and middle schools are factored in.

Rep. Avery Bourne, R-Litchfield, said she opposes the bill after hearing from many constituents concerned about the fiscal impact it might have on their school, especially for struggling rural districts.

"This is a scary prospect for them," she said "It goes beyond tradition to ultimately 'what's this going to cost our district?'"

West said if a commission denies a school from keeping a Native American mascot, he wants the school to have ample time to make changes that wouldn't hurt them financially.

Other committee members like Rep. Jennifer Gong-Gershowitz, D-Glenview, said she is supportive of the bill and looks forward to the amendments. She said carrying on a school tradition isn't a reason to uphold problematic mascots.

"Your tradition doesn't give you the right to hurt somebody else," Gong-Gershowitz said. "I think we have a long history of trying to defend discriminatory impact through intent."

Illinois is familiar with the debate over Native American mascots.

The University of Illinois at Urbana-Champaign for decades used a Native American mascot called "Chief Illiniwek." The mascot dressed in a feathered headdress and face paint often danced at sporting events. The school retired the mascot in 2007. While the school's athletic teams are still known as the Fighting Illini, the University has dropped the Native American logo.

Rep. West said he got the idea of creating a commission from the Chicago Blackhawks ice hockey team. He said the team consults with a group when making decisions on how to use Native American imagery.

The American Indian Center of Chicago partnered with the Blackhawks up until last summer. However, the center said it cut ties with the Blackhawks because it said it does not "affiliate with organizations that perpetuate harmful stereotypes through the use of 'Indian' mascots."

The center is critical of West's original bill because it says the Native community didn't have any input. But they are looking forward to discussing upcoming amendments.

Center CEO Joseph Podlasek said the group has also been working with a few suburban high schools and their mascots. He said engagement is important, and he is supportive of a Native American commission deciding what each high school should do.

West said he plans to work with Native groups and will return after in April with an amended bill.