Accessibility links
Outdoor Activity Of The Day: Backyard Stargazing Local astronomers say stargazing can remind you "that there is a universe out there that we're all connected to."

Governor Pritzker's "stay-at-home" order has left lots of Chicagoans wondering how ⁠they can safely enjoy the outdoors during the COVID-19 pandemic. While the city's lakefront, adjacent parks, the 606 and Riverwalk have been closed because people were congregating in large groups, many natural areas in the region remain open.

So people can still go outside to walk, run or bike ride, as long as they remain six feet away from other individuals. If these rules are followed, experts say spending time outdoors can be really good for mental and physical well-being.

We asked Chicagoans for ways they've spent time outside while practicing safe social distancing — and we're highlighting an activity to try each day this week. Today's activity, stargazing, only requires a clear sky, a porch chair and your eyes.

Cesar Alvarado said he first grew to love the night sky when his mom would take the family to Foster Beach at night to jump off the rocks into the sand and watch for shooting stars. He took this photo of the moon from his backyard in Elgin, IL. Cesar Alvarado/WBEZ hide caption

Michelle Nichols, director of public observing at Chicago's Adler Planetarium, said stargazing at night is a great way to get outside during COVID-19.

"There's no limitation that says you can only go outside during the day," she said. "Being out at night can be just as mentally beneficial as going outside to see the daylight."

Chicago astronomer Joe Guzman, also known as "Astro Joe," leads star talks for Chicago's Park District, the 606 and After School Matters. He said it's possible to see lots of stars without having to leave your own backyard — just try to get away from any glare.

"Although we have intense light pollution in the city, it's a misnomer that you can't see anything," he said. "Find a shaded area away from street lights and the skies will open up to you."

To start, Guzman said to sit in a chair facing north and try to find Polaris — the North Star — because "everything orbits Polaris." For help, he suggests bringing a printed star chart out with you or downloading an app like Sky Safari or Stellarium to help you identify constellations and planets. And, while you can still see a lot with your naked eye, a pair of binoculars can greatly enhance the experience.

Michelle Nichols (left) brought an Adler telescope home with her for the duration of the planetarium's closure. Joe Guzman (right) said all of his stargazing events have been cancelled for the foreseeable future, so he's stargazing solo from his backyard in Chicago's Pilsen neighborhood. Michelle Nichols and Joe Guzman/WBEZ hide caption

Nichols added that it's important to wear layers, including warm socks. You might also want to bring a sketchbook to draw what you observe and write notes.

"And, hot chocolate is always a welcome addition to the evening."

If you want guidance for what to look for, Nichols recommends checking out astronomy resource websites like earthsky.org/tonight or timeanddate.com's moon phases section. The Adler Planetarium also has frequent "#LookUp" posts on social media and a printable LookUp guide for beginner astronomers featuring drawing and journaling prompts to get to know the sky over the course of a week. 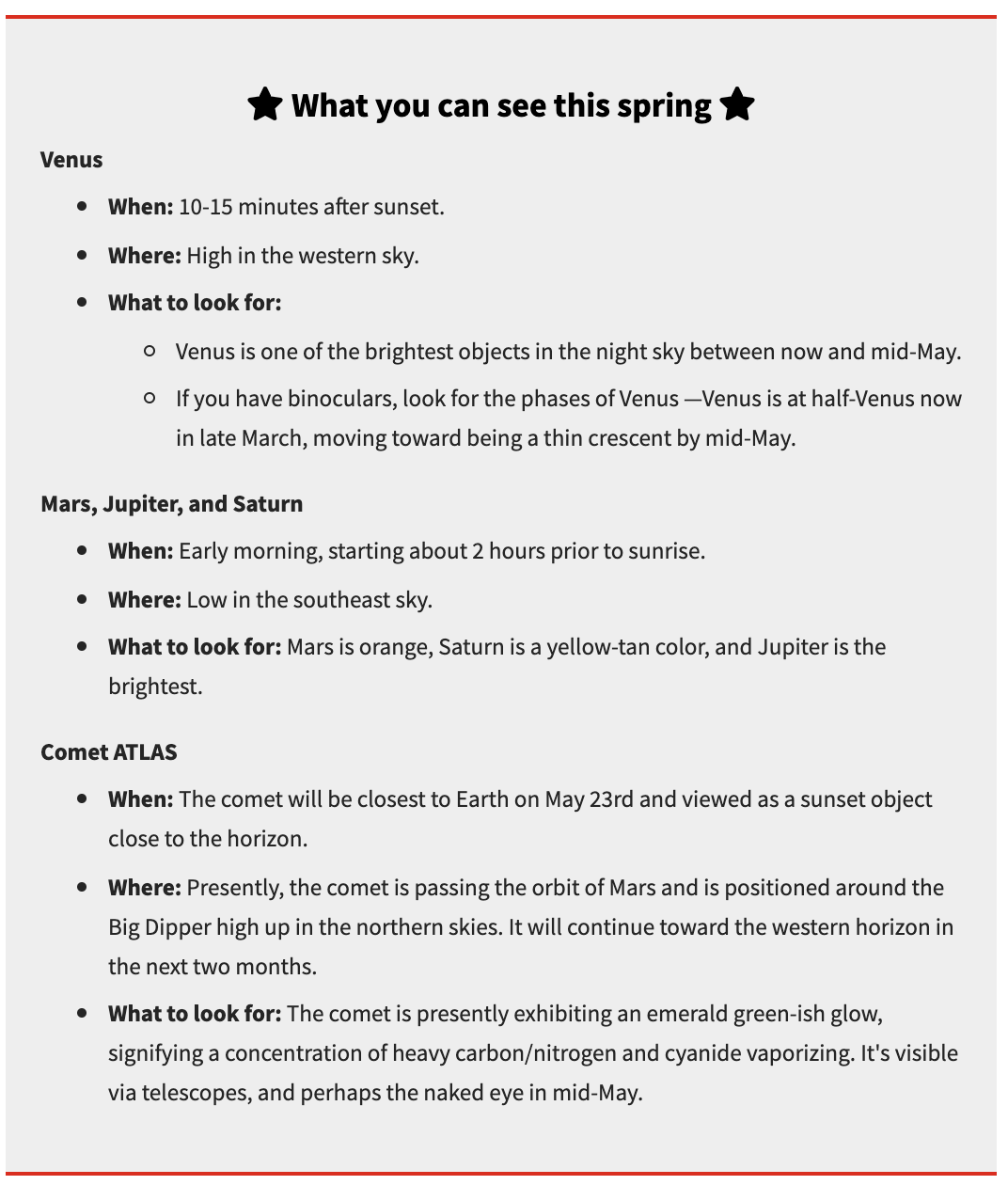 Nichols said it's easy to stargaze without ever having to leave your backyard.

"There's no one best spot to observe the sky. The best place to observe the sky is wherever you currently are. So you don't have to find that perfect location — it doesn't exist. There are some sites that are better than others, but truly get to know the sky where you are."

She said the silver lining of stargazing in an urban area is that it's actually easier for beginners.

But there's also another advantage to stargazing right now. Guzman said with so many people staying inside during COVID-19, there's less air pollution — and being able to see the stars depends on the levels of both air and light pollution.

"The skies have gotten a little deeper in the last couple of weeks. Even with the light pollution problem we're encountering, there are less cars, less factories, less pollutants in the atmosphere."

"The light pollution bounces off of these particles in the air. The less particles, the deeper the sky, the better the seeing conditions for astronomy."

As for sharing your stargazing experience with others while staying socially distanced, Nichols said electronic communication can help bridge the gap.

"Set up a FaceTime or Facebook Live where your group goes outside at the same time all look at Venus at the same time," she said. "That's how you can have group observing activity without congregating in a group."

Why stargazing offers so many benefits

"I love the one-on-one relationship I get to build with the cosmos. It's quiet and it's there just waiting for us to examine it. I love exploring and discovering new things in the sky. Even though it's been there for billions of years, it's new to me." - Joe Guzman

"Standing beneath the night sky creates a feeling of humility in a vast universe of gas and light. Even on a dark, clear night there are so many stars that can only be identified through a lens." - Evan Medrano

"It's hard to describe, but I love the night sky. Many times I've been stopped in my tracks just to gawk up at the stars. It's almost a type of meditation? I find it very peaceful and relaxing, even when it's 10 degrees out and I'm freezing. I just get trapped in the hugeness of it all." - Sam Donnell

Katherine Nagasawa is the multimedia producer for Curious City. You can reach her at knagasawa@wbez.org.

Chicagoans living near heavy-traffic corridors breathe the most polluted air

Chicagoans living near heavy-traffic corridors breathe the most polluted air

May 14, 2022 • Alexandra Antoine has been creating community-informed art for years. Now she's digging into the Garfield Park neighborhood and welcoming its residents to create alongside her.

Kawanna Shannon, director of patient access at Planned Parenthood of the St. Louis Region and Southwest Missouri, works at her desk at the Planned Parenthood clinic in Fairview Heights, Ill., on Monday, April 11, 2022. This clinic is among those in Illinois that is seeing more requests for abortion services from women from states where abortions are being restricted. Associated Press/Associated Press hide caption

May 12, 2022 • Tens of thousands more people may seek abortions in Illinois. Hospitals and clinics worry they won't have enough staff to treat them.

May 4, 2022 • A new analysis of public data about CPD members finds that their misconduct, often portrayed as a matter of "bad apples," is a group phenomenon and inflicts outsized harm in minority communities.

Jones College Prep, a selective Chicago public school in the South Loop, is one of many schools grappling with a racial reckoning. WBEZ/WBEZ Chicago hide caption

May 4, 2022 • A new racial equity study underscores frustration among students and staff, and the ways in which school leaders have failed to tackle these issues

The Latin School of Chicago at 59 W. North Blvd. is being sued for allegedly turning a blind eye to bullying by parents of a boy who committed suicide. Anthony Vazquez/Chicago Sun-Times hide caption

April 29, 2022 • The parents say the boy was relentlessly bullied but Latin didn't inform them or investigate, as required by law. Latin strongly denies wrongdoing.