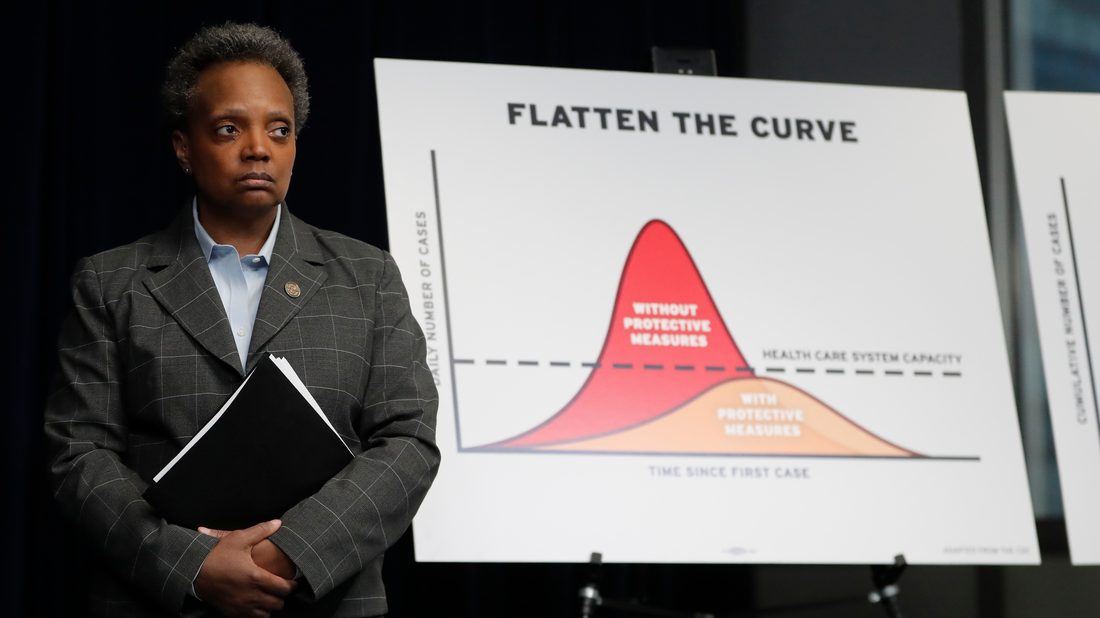 Chicagoans are indeed helping to flatten the curve of COVID-19 cases in the city, according to new public health data from Mayor Lori Lightfoot's administration.

In the beginning of March, when the new coronavirus started to emerge in the city, cases were starting to double every two days, the data show. If that pace kept up with no interventions, city officials estimate Chicago could have had 1.5 million cases and nearly 50,000 deaths around now.

Instead, there's been a sea change in Chicagoans' lives: City Hall shuttered the city's famous Lakefront and pleaded with residents to practice social distancing, while Gov. JB Pritzker largely closed down restaurants, bars and schools and enacted a statewide stay-at-home order.

The result: There have been 9,666 cases and 347 deaths in Chicago. Cases are now doubling every 12 days instead of every two.

"We flattened that curve just over this last month," Dr. Allison Arwady, who leads the Chicago Department of Public Health, told reporters during a briefing on Tuesday.

Still, Arwady tempered that good news by reiterating that Chicago still has a ways to go before it's past the worst of the pandemic.

"We're going to need to get to a point where we not only see it flatten entirely, meaning that they're not doubling at all, but then we see the number of new cases actually declining," she said.

Officials have worried for weeks that a sudden spike in COVID-19 cases would break the back of the hospital system across Illinois. That's why flattening the curve, and pushing the peak number of cases out over a longer period of time, is key to making sure hospitals aren't overwhelmed with patients, Arwady said.

There are signs of optimism in the newly released data, much like in case trends for the rest of Illinois. But that doesn't mean Chicagoans should start to slack on staying apart and staying home, Lightfoot urged.

"Think about a world in which you go back to work," Lightfoot told reporters on a Tuesday conference call. "When are you going to feel comfortable? When we have widespread testing. When we have some system in place where employers and individuals can be certain not just about themselves, but also about their colleagues. And think about large public events."

Arwady said the city is closely following four key areas that will determine when life can begin returning to normal. The city wants to see a sustained drop in new cases; to make sure hospitals can continue to safely treat all patients who need to be hospitalized without rationing ventilators or turning people away; to ensure the city can test everyone who has symptoms and do more widespread testing (that's not happening now); and to be able to more closely contain the virus by being able to monitor more confirmed cases.

In other words, it could be a while, Chicagoans, before life returns to normal.

Here are some other interesting nuggets that emerged from the data:

Kristen Schorsch covers public health on the government and politics team for WBEZ. Follow her @kschorsch.