Accessibility links
Restaurant Lobby And Chefs Urge Tweaks To Illinois Reopening Plan Chicago and Illinois restaurants are crafting ideas on how they can open more quickly as the city and state offer reopening plans. 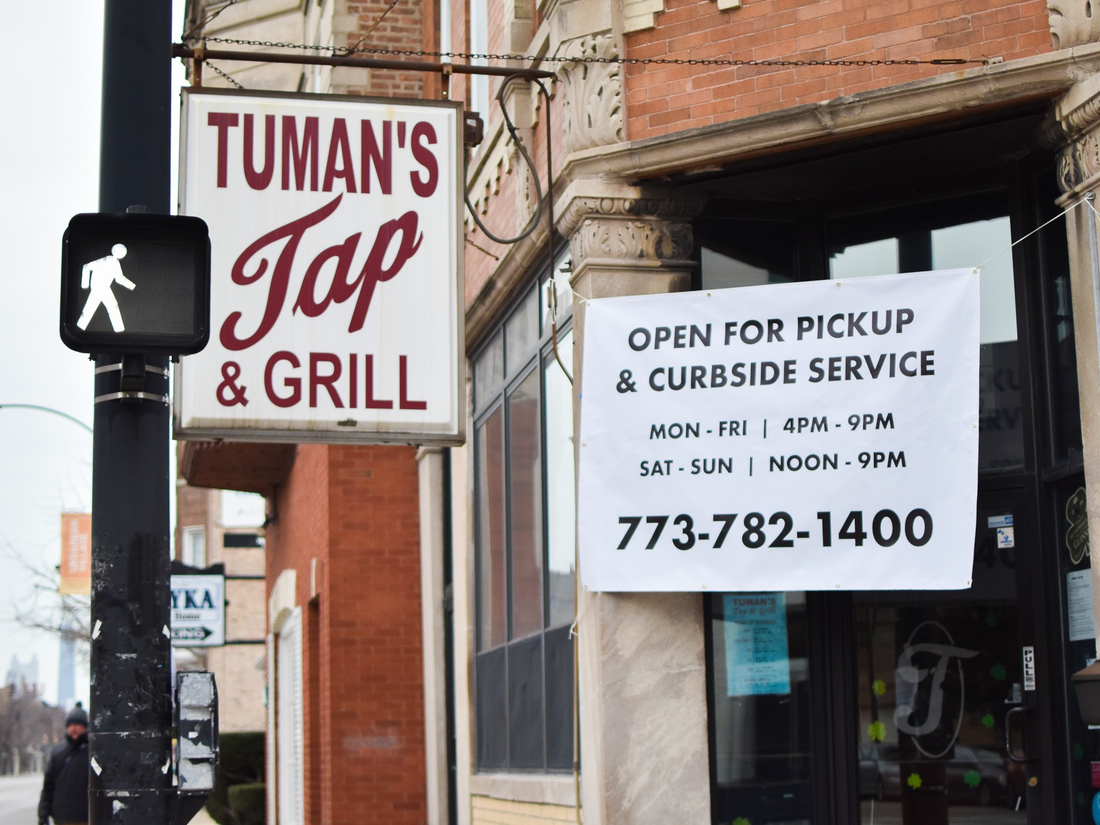 Like other food and drink businesses across the state, Tuman's Tap and Grill in Chicago's Ukrainian Village neighborhood has offered takeout only during the pandemic and stay-at-home order. Paula Friedrich/WBEZ hide caption

As Illinois lawmakers head to Springfield this week to discuss, among other things, the state's reopening plan, restaurateurs want their voices heard at the table.

Many were caught off guard earlier this month when Mayor Lori Lightfoot and Gov. JB Pritzker released five-stage plans that either leave restaurant opening dates unclear or delay them to the end of June — well behind businesses like nail and hair salons.

"By the time we reopen, we are going to be closed for a third of a year," said Carrie Nahabedian, Brindille chef and co-owner. "How long do you think this small amount of money we're getting from the [Payroll Protection Plan] is going to keep us going? It's nonsense."

So lobbyists like Illinois Restaurant Association president Sam Toia have been calling up lawmakers before the General Assembly reconvenes this week. He said he's aiming to protect an industry that brings in about $20 billion and employs half a million workers across the state.

Toia — and all the restaurateurs interviewed for this story — prefaced their requests with the caveat that reopening should be contingent on sustained improvement in Illinois' and Chicago's COVID-19 statistics. They also repeatedly stressed that the safety of their staff and customers is their first priority.

But they also noted that they are a highly regulated industry that requires health training for most employees, and that Illinois has the benefit of watching the test cases in already-opened Iowa, Indiana, Missouri and Wisconsin.

One of the Illinois lawmakers feeling the tension between health and business most acutely is Sen. Sara Feigenholtz. Her Chicago district includes Lakeview and Lincoln Park, with some of the state's most visited attractions and restaurants. She said she gets it.

"I am the daughter of a doctor," she said, "but I also have a tremendous appreciation for what these businesses are going through."

This week in Springfield, she'll face the delicate balancing act of representing business concerns while helping support a governor whose plans have come under legal attack from entities around the state.

"We're going to go down to Springfield as a legislature to perhaps codify and address some of the things that he has done, so that he doesn't have to solely carry the burden," she said. "We are a coequal branch of government, and that is our responsibility."

When it comes to tweaking the reopening plan, Feigenholtz sees the possibility to "nibble around the edges and remediate and loosen some regulations safely," she said. "But we can't do it with peril afoot."

She also noted that federal help from the pending Heroes Act stimulus bill could go a long way in reducing the pressure for the state to reopen so soon.

Back in Chicago, the city's plan does not specifically exclude restaurants from the next phase of reopening, and Lightfoot has even hinted that restaurants could open as early as June. But Toia said he does not expect Lightfoot to do anything to violate Pritzker's state rules. So he's hoping the two plans can become better aligned with, for example, both using the 14-day period between phases.

In the meantime, 42nd Ward Ald. Brendan Reilly said he'd like to work with Chicago restaurants, including more than 1,000 in his downtown ward, to come up with creative ideas to safely move the process along.

"If they can win [international] awards for creativity, they can get creative in finding a safe way to protect their employees and customers while slowly opening up their business," he said.

One of the creative solutions under consideration, he said, includes turning some streets into outdoor restaurant seating.

"We are talking with industry leaders about potentially closing down some nonarterial streets, including in the central business district, to allow for outdoor table spacing," he said. "Most experts believe there is less risk to public health if people are dining outdoors rather than indoors."

And these creative ideas are going to be crucial for a world-famous dining scene that is driven, not by conglomerates, but many individual entrepreneurs.

But these independent restaurants that make Chicago great also tend to lack the deep financial reserves of national chains. And Toia noted that the economic forecast for restaurants, in general, is pretty bleak.

"The National Restaurant Association, a few weeks ago, predicted that up to 25% of restaurants may not open again," he said. "And if you go to the end of June, maybe it's going to go even higher."

But even if Illinois restaurants do open soon, restaurateurs are going to face a number of challenges. For instance, eating is one of the few public things that you can't do with a mask on. Some restaurant staffers might be apprehensive about interacting with the public in their dining room again. And, who knows how many customers will return?

"No one is saying that people are going to come out in droves to eat," chef Nahabedian said. "Consumers are going to need to have the confidence to venture out and take the first step. And we don't know what people are thinking. That is the big unknown."

The next few weeks will be key for the state's restaurant industry as developments play out around reopening regulations, COVID-19 statistics, federal stimulus, neighboring states and that all-important consumer confidence.

Nahabedian said she knows the odds aren't great. But, as someone who's led some of the city's top kitchens for the last four decades, she's not giving up without a fight.

Monica Eng is a WBEZ reporter. You can contact her at meng@wbez.org. 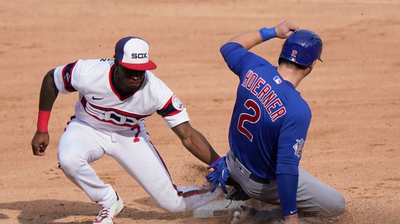 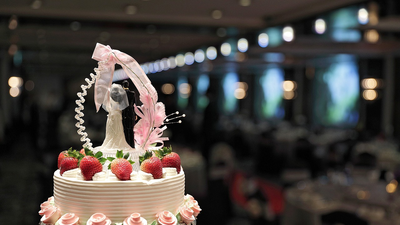 A wedding cake stands at a venue. Dorigo/pixabay.com hide caption

Wedding Professionals Say Some Venues Are Not Following COVID-19 Rules

September 28, 2020 • Last month a wedding in Maine became a super spreader. Some Chicago wedding professionals worry that could happen here.

Wedding Professionals Say Some Venues Are Not Following COVID-19 Rules 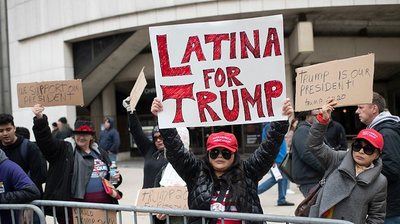 A woman holds a pro-Trump sign at a protest against President Donald Trump, who was speaking in Chicago, in Oct. 2019. Marc Monaghan/WBEZ hide caption

Nearly One Third Of Latinos Vote Republican, But Who Are The Trump Supporters?

September 28, 2020 • This year, Latinos are expected to be the largest non-white voting bloc for the first time. Trump's appeal may be stronger than you think.

Nearly One Third Of Latinos Vote Republican, But Who Are The Trump Supporters?