Accessibility links
Stick This Swab Up Your Nose And Twirl It: Self COVID-19 Tests Are On The Rise We may be self-testing for COVID-19 some day as early studies show that less invasive self tests for COVID-19, when done correctly, can work. 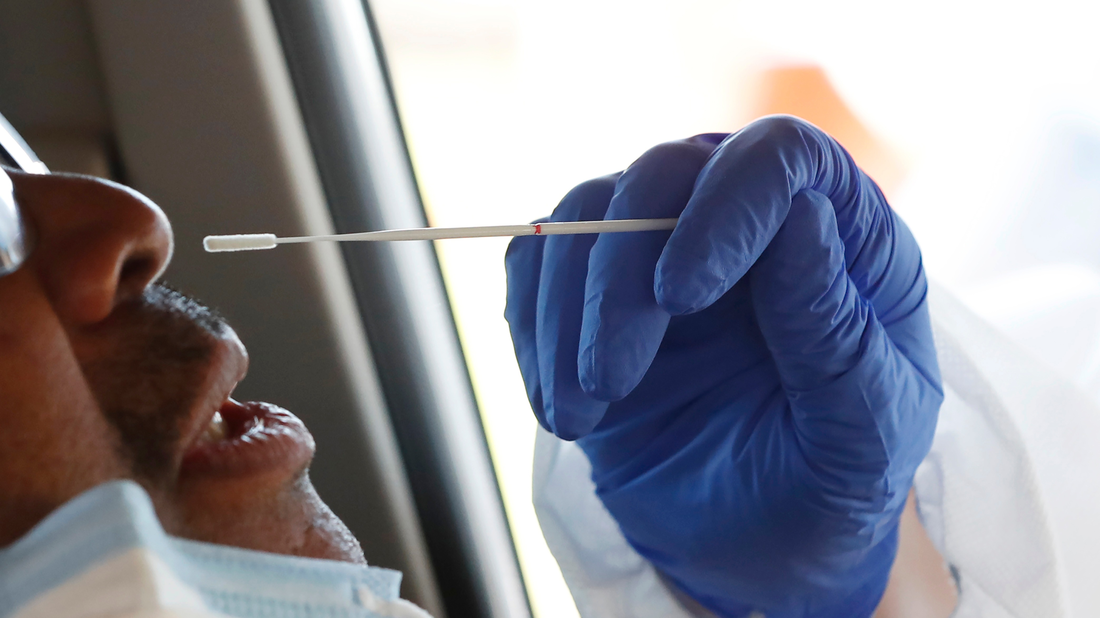 A few weeks ago, Perry, who lives in Chicago's northwest suburbs, started feeling symptoms of what he thought was COVID-19. The 64-year-old and his wife drove from their house to Waukegan to get tested.

But instead of the invasive and unpleasant nasal test he'd heard about, they were handed swabs that looked like large Q-tips and told to collect their own samples.

"They instructed us to take the swab and place it halfway up our nostril, twirl it to the right a few times and twirl it to the left a few times, and let it sit in the nasal cavity for 15 seconds," said Perry, who asked that his last name not be used for privacy reasons.

Then they handed Perry a small vial with liquid to put the swab inside.

When Perry told his doctor about how he took the test, his physician said he was surprised he collected the sample himself.

"[He said] that my results were worthless based on his experience and knowledge of how the test should be done," he said.

Perry and his wife tested negative, but they didn't know if they could trust the results, so they decided to self-quarantine for 14 days.

It's a method that may become more common as federal guidelines expand to eventually allow at-home tests. But it's raising questions for people who worry about whether they did they tests correctly and if the rush to expand testing has pushed through methods that might not be entirely sound.

Can I test myself?

Health care experts say if done correctly, self-swabbing is acceptable. Testing sites often have a health care provider watching the patient administer the swab and kits include directions on how to do it properly.

Emily Landon, an infectious disease specialist at the University of Chicago, said she and her team had conducted previous studies that show people can reliably test themselves. She said she expects self-swabbing to become more widespread. It's not only more efficient, but it could be safer for health care workers.

"The holy grail of testing is really something where people can test themselves on a regular basis," Landon said. "You don't need staff or people to wear [personal protective equipment] to do the collecting. You don't need them to be there if you just hand people a sample and they can pick up a kit and take it home."

Landon envisions a time when essential workers can test themselves daily before heading to work as we wait for a vaccine or cure.

As for why self-testing is allowed now, when it was done only by health care professionals at the start of the pandemic, Landon said this is a routine evolution in how scientists approach new diseases. When there's a new virus, Landon said guidelines always start out especially conservative. For example, doctors testing for COVID-19 used to collect multiple nose and throat swabs, but also blood and urine samples. As doctors learned more, that changed. They've since dropped the blood and urine samples. Now, federal guidelines allow for self-sampling and even at-home tests, which is why different testing sites administer different tests.

"It's an acknowledgement that there are practicalities," Landon said. "We may not need the redundancy we were having before, because now we're confident this one method is good enough."

How far back do you go?

As the federal government has adjusted who can administer a COVID-19 test, they've also changed how the test can be conducted. Previously, the preferred test was the nasopharyngeal test, which goes all the way to the back of the nose and is extremely uncomfortable. Doctors and researchers are finding that it's not always necessary to go back that far.

An early study by UnitedHealth out of Washington state found self-collected nasal swabs, even those that don't feel like a brain scrape, can be just as reliable as those particularly uncomfortable tests administered by health care workers. Another study by Rutgers University found testing saliva was also extremely reliable.

Information is changing quickly and neither study has been peer reviewed yet, key for acceptance in the scientific community. While these early studies show promise, there still isn't enough data or information to say with certainty the best test or testing method.

But, then again, doctors say no test is ever 100% accurate. It's not just how far back you test within the nasal cavity, but when an individual gets tested compared to when their symptoms began.

Regardless of what kind of nasal swab test is conducted, Landon said the sample needs to be collected correctly.

"If you skimp and you do just stick the cotton in as far as comfortable you're not going to be as good of a sample," she said. "It's going to have to be a little bit uncomfortable, that's what it comes down to."

If people doubt their results or are worried they didn't collect a good sample, experts advise patients to reach out to the testing site or a specialist who can advise whether to retake the test.

Kate McGee covers higher education for the WBEZ Education Desk. You can follow her @McGeeReports.