Accessibility links
Grocery Options Become Scarcer On Chicago's South Side Some South Side residents are struggling with food options after nights of unrest — and volunteers have stepped up. Most grocery stores and pharmacies in Chicago have been open during the pandemic because they're essential businesses.

But some have been forced to close the last two days because of violent unrest and looting in Chicago, and that's leaving many residents wondering where they're going to get their next meal or medication.

While access on the North Side was spotty the last few days, many stores on the city's South Side and downtown were damaged, looted or both — leaving some residents traveling sizable distances for groceries. That becomes more difficult with public transportation suspended. Many undamaged stores remained closed as a safety precaution for employees and customers.

A Mariano's spokesperson said currently the only closed location — of the 44 grocery stores in Chicago and suburbs — is in Bronzeville on the city's South Side. She added that regular hours are altered to respond to curfews, so customers should call locations ahead of time.

Whole Foods Market in Englewood is also temporarily closed. In a statement, a spokesperson said, "We are monitoring activity around our stores and are adjusting store hours or closing as needed to ensure the safety of our Team Members."

Eva Maria Lewis lives in South Shore and said the closures are OK if it stops looting.

"I'm not blaming grocery stores for being closed, given all the chaos on the ground," Lewis said. "It wouldn't be good for people, especially immunocompromised and elderly, to get caught in crossfire like that," she added.

But she said stores should step in to fill the gap.

"They could donate in kind donations," she said. "They could set up food on the sidewalk."

Lewis is part of a coalition called Chicago Family Pairing Program, which is collecting donations to pay drivers who have multiple options for food on the city's North Side to deliver groceries to residents on the South Side.

Many of the affected areas have historically suffered from lack of food options — with observers dubbing them "food deserts." 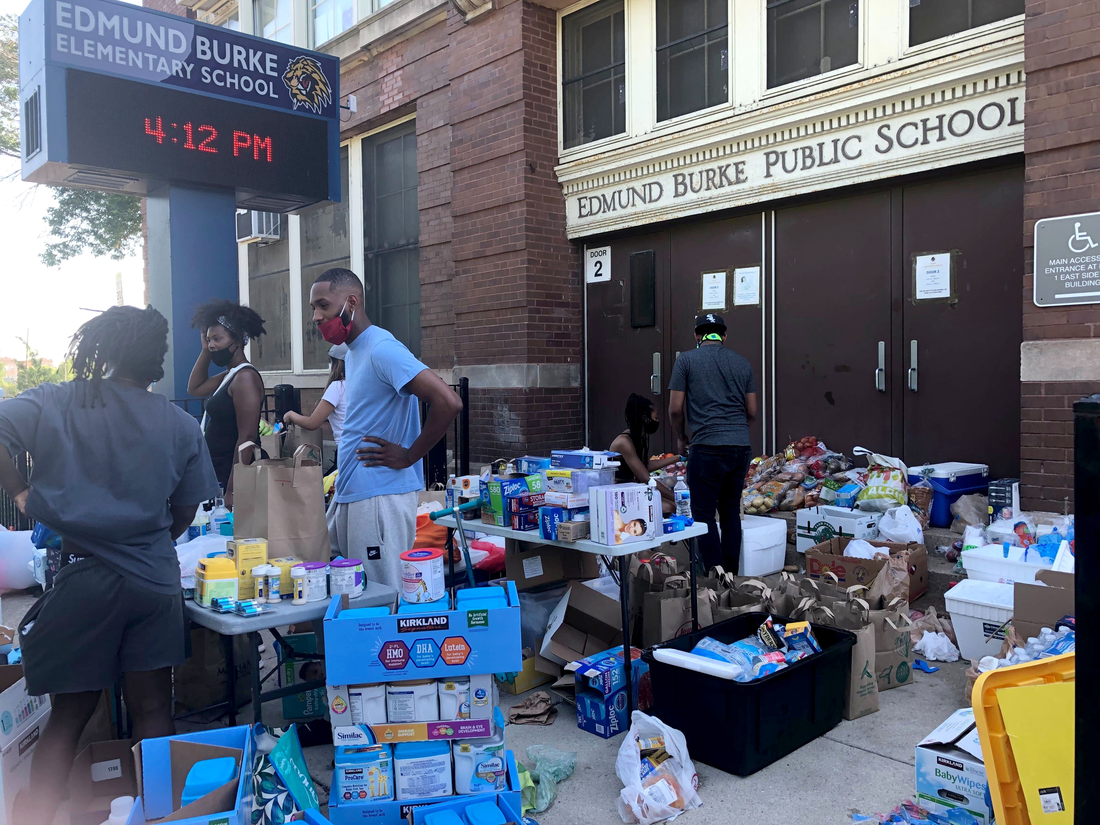 Activists held an outdoor food pantry on Tuesday at Burke Elementary School in Washington Park on the South Side. They say demand for food is high with most of the grocery stores not open after looting over the weekend. Sarah Karp/WBEZ hide caption

Trina Reynolds-Tyler is from Bronzeville, and goes to school in Washington Park. She said she organized the impromptu street food pantry after Chicago Public Schools suspended meal distribution on Monday. She said they continued on when they realized that the school system only provides enough food for students, not for their entire families to eat.

Reynolds-Tyler said the situation is especially desperate because so many people are out of work, in addition to the store closures.

Big box retailers with food sections such as Walmart and Target were also targets of looting this week. A spokesperson for Target said "like many businesses, we are making the decision to reduce hours or temporarily close stores for the safety of team members and guests." She said most closures will only be temporary.

Pharmacies such as Walgreens had to temporarily close many of their Chicago locations. According to the company's website, more than 55 stores were closed, with most of those located downtown and the South Side. A spokesperson for CVS said nearly 24 Chicago-area stores are still closed, but the company reopened more than a dozen today.

City officials were unable to provide a list of damaged stores, because they were still working to survey and assess the damages.

The city-wide damage has also brought a level of uncertainty to the city's plan to ease COVID-19 restrictions. On Tuesday, Mayor Lori Lightfoot said the city is planning to forge ahead with reopening.

"You see all this loss around you," the mayor said. "These are businesses that had been gearing up to open tomorrow, but were instead cleaning up debris, sweeping broken glass and trying to tally the inventory that had been stolen from them. 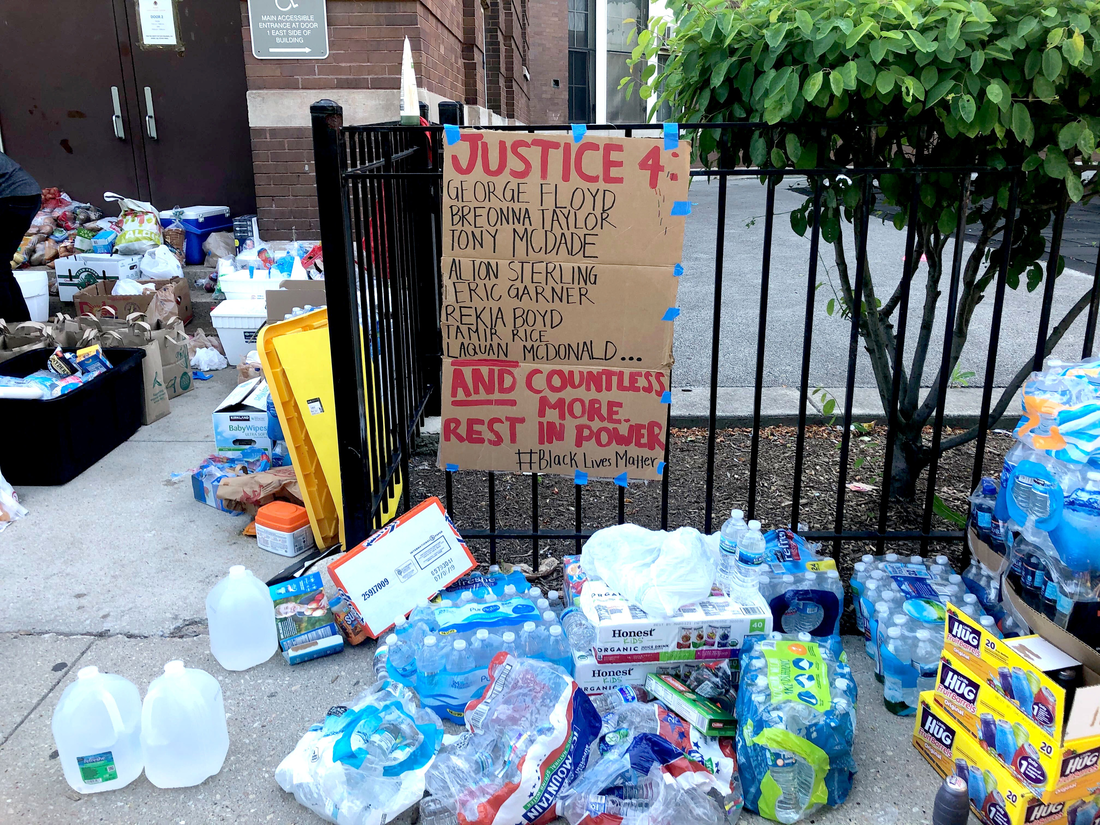 Activists held an outdoor food pantry on Tuesday at Burke Elementary School in Washington Park on the South Side. Sarah Karp/WBEZ hide caption

The Greater Chicago Food Depository, which distributes food to more than 700 food pantries, soup kitchens and shelters in Cook County, resumed services after halting them yesterday following the unrest over the weekend. Another group of activists are giving out food at a West side school.

Reynolds-Tyler said she and other activists don't think that grocery stores needed to completely shut down, despite looting on the South and West sides of the city. She said it feels more like punishment than a response driven by safety concerns."We wanted to provide people with boxes of things, with cases of water, with jars of peanut butter, with loaves of bread," she said.

"We decided that if the state was not going to do what was needed in order to support black people, in this moment, then we as a community, we felt like it was our duty."

She said the South Side food pantry served about 500 families on Tuesday. The organizers need to regroup, but she said she would like to be able to continue handing out food over the summer.

The group got food through fundraising and donations of food. Deborah Butler, who has two sons and one daughter, stopped by to get a bag full of groceries. She said she doesn't have a car and still has not figured out what she will do if stores don't open soon.

She said she understands the pain and frustration of the looters, but she wishes they would understand how much their actions hurt the community.