Accessibility links
Police Will Remain In Chicago Schools — For At Least One More Year The Board of Education approved a one-year school police contract while also approving a plan to come up with an alternative by March. 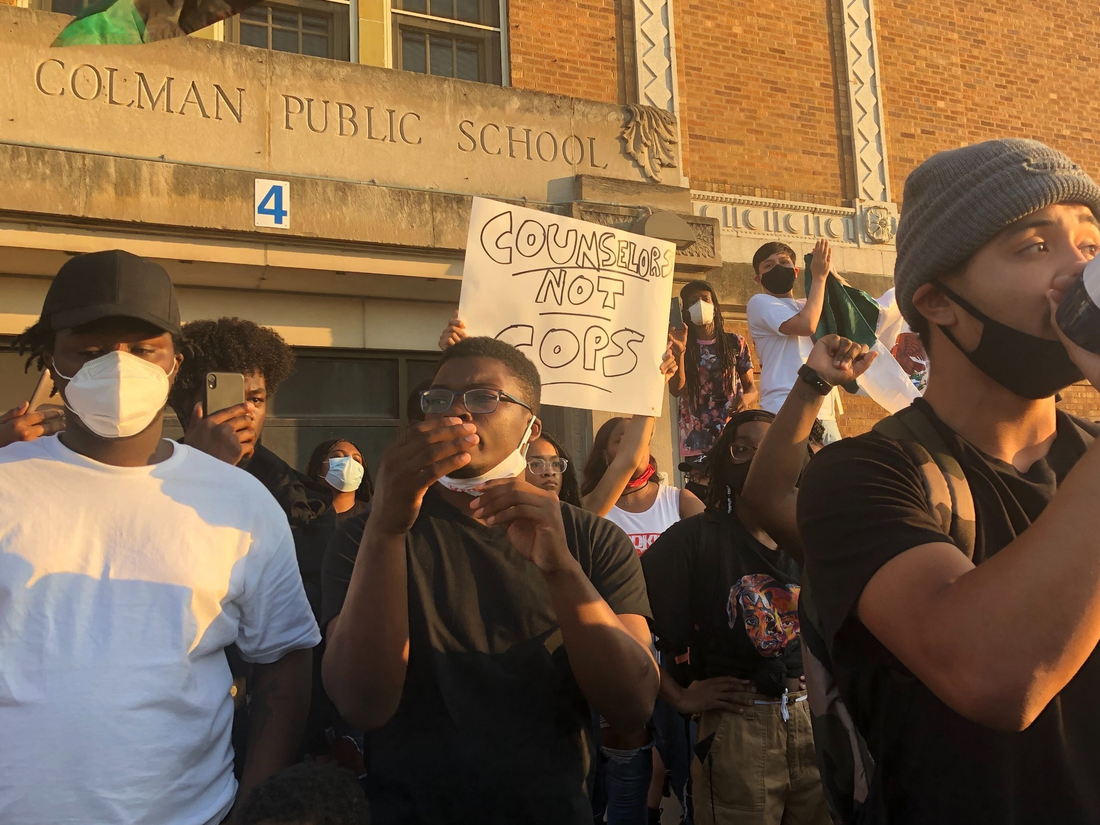 With activists on the street outside their downtown headquarters, the Chicago Board of Education on Wednesday approved a scaled-down contract with the Police Department and a resolution that could set the stage for ending the practice of stationing police in city schools completely.

The one-year $12.1 million contract passed by a vote of 4-to-2, with one member abstaining. And the resolution, which requires the school district to create an alternative safety plan that could replace the School Resource Officer program, was also approved in a 4-to-2 vote, with one abstention.

Vice President Sendhil Revuluri, who voted to continue the SRO program this year, said the creation of this alternative plan does not guarantee the school police program will end next year, but he said this could help the school district get to that point.

Under questioning by board members who want to remove police from schools, Revuluri said he doesn't want to sunset the program, because he is not sure simply removing SROs will help lessen the school-to-prison pipeline. "If we remove SROs as an option, I think that would be good, but I don't think it removes the root cause that some adults feel it is necessary to call police," he said.

The votes culminated a summer of protests against the school police program in Chicago and similar programs around the country. In a vote in June, the board narrowly rejected removing police from schools.

Board member Elizabeth Todd-Breland, a historian, led the charge for removing police from schools, saying the reasons for ending the police in schools program have gotten stronger since June. She pointed out that students have been beaten by police at protests and subjected to questionable police tactics.

But board member Dwayne Truss insisted that communities need different things and that for some schools, police officers are needed. He said he was upset that Black parents who supported having police in schools were being disparaged.

"It can't be this zero sum game where it is absolute," Truss said. "You can have your different viewpoints and lenses, that is OK. What concerns me the most is that, if you don't agree with me, somehow you don't like kids. You are not concerned with kids safety."

CPS officials also laid out several changes they had made to the police contract, which is down from $33 million last year. These include a more stringent policy for selecting officers to serve in schools, additional training and oversight.

The School Resource Officer vote was not the only big item on the agenda for Wednesday's monthly board meeting. The school district's $8.1 billion budget for this school also passed. Board members asked many questions about plans to spend $343 million in federal money that has yet to be allocated.

They also challenged the inclusion of an annex for a majority-white, overcrowded elementary school on the Northwest Side. Board member Amy Rome said she eventually became convinced that there were no other options besides building an annex to solve overcrowding at Sauganash Elementary. But she said parents need to be cognizant not to engage in "opportunity hoarding."

Also, Chief Education Officer LaTanya McDade said going forward the school district will look at other ways to deal with overcrowding beyond new construction. Many of these other approaches, which include turning some neighborhood families away, are controversial and have not been used in decades.

A summer of debate and protest over school police

But the most heated issue at the board meeting was the School Resource Officer program. For years, youth have challenged the idea of stationing police in schools. But that debate heated up after the police killing of George Floyd and protests calling for the defunding of police.

Over two months of tense meetings, the local school councils of 15 of the 72 schools with police assigned to them voted to remove police. These included some of the biggest high schools, such as Lane Tech College Prep on the North Side and Curie Metro High School on the Southwest Side.

Two other schools also will have their police removed. Kelly High School voted to keep them, but not enough council members were in attendance to validate the decision and they will be removed. And Phillips High School does not have a functioning LSC, but the principal told CPS it was OK to remove the officers. 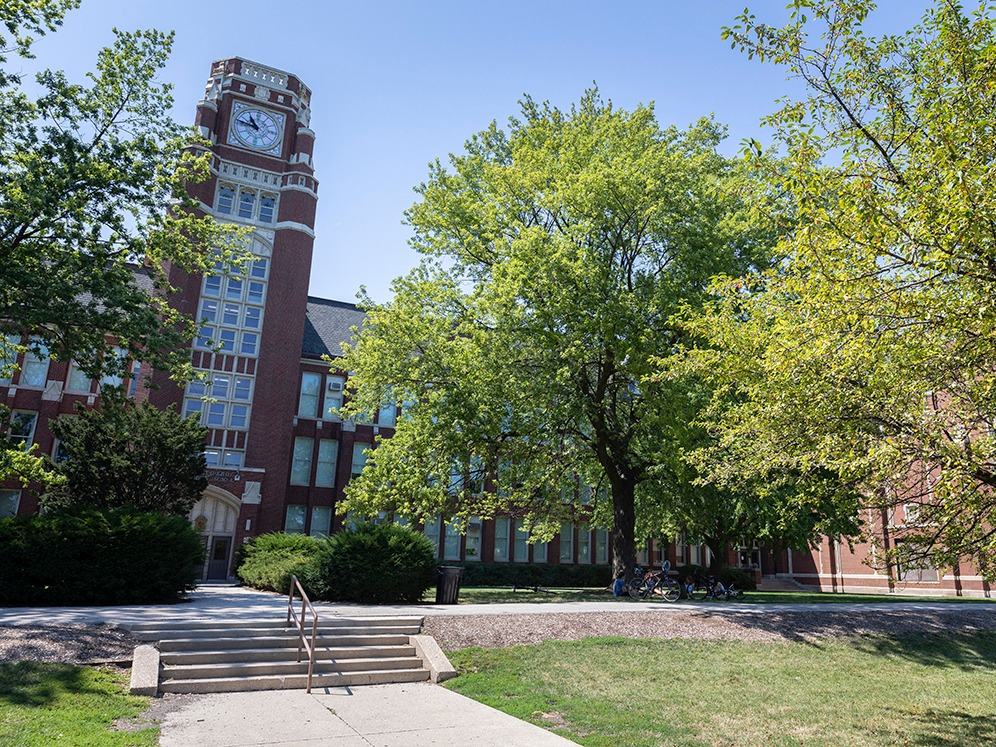 Lane Tech College Prep on Chicago's North Side is one of 17 schools that is removing police officers stationed in their school buildings. Manuel Martinez/WBEZ hide caption

But the votes to remove police took place primarily at schools that serve either mostly Latino students or a racially mixed student population. Only two of the 17 schools removing officers are majority Black. That means that going forward, about 48% of white students and 54% of Latino students at traditional city high schools will go to schools with police.

Meanwhile, about 73% of Black students will continue to be at schools with police.

Rome said this means that the 55 schools keeping SROs represent schools with students that are traditionally over-policed.

"This is an issue of justice and civil rights," she said. "Pushing this vote to the LSCs was not the right approach."

Rome said it was the board's job to make the decision.

The schools removing police are working on alternative safety plans. CPS Chief of Safety and Security Jadine Chou said these plans mostly involve protocols for when police should be called. She veered away from saying that the school district would commit extra resources to these schools without the police — a key demand of advocates for removing school police.

In the past, CPS officials have said they would not give schools the money saved by removing officers.

During the build up to Wednesday's vote, Chicago Public Schools provided long-awaited information about student arrests. Officials touted that arrests of young people on school property are down 71% to 1,000 arrests in the last full school year of 2018-2019. But Black students continue to make up more than 70% of the arrests.

Voices on police in schools

Before making their decisions, the board heard from a student, several parents and a long list of progressive aldermen urging them to abandon the program all together.

"Make no mistake: Cops do not keep us safe. They demean, assault and harass us," said Marlenne Garcia, a graduate of Hancock College Prep, a Southwest Side school that voted to remove police from schools.

Most speakers opposed school police, but the program did draw some support for those communities that want it.

"I know there are many parents that do not feel comfortable allowing their children in and around their schools without officers," said Ald. Michael Scott, 24th Ward, chairman of the City Council education committee. "This isn't a one-size-fits-all model, and I don't think that you can remove all officers from all schools at one time and [have] our communities continue to feel safe."

Ald. Andre Vasquez, 40th Ward, scolded the school district for taking a long time to answer questions he asked at a July hearing. He said he still did not get information on the demographics of school police officers, nor on how many complaints each had received.

But he did get information showing that schools with police officers suspend students more, notify police more and have more students arrested than other schools.

Alds. Roderick Sawyer, 6th Ward, Jeanette Taylor, 20th Ward, and Carlos Ramirez-Rosa, 35th Ward, who all spoke at the board of education meeting, have an ordinance pending to force the Police Department to cancel its contract with the board. That ordinance is currently stuck in committee.