Accessibility links
What We Do — And Don't — Know About Chicago's Lead Water Problem The mayor announced a plan to replace the city's lead service lines. So what does that mean for Chicago residents and the water they drink? 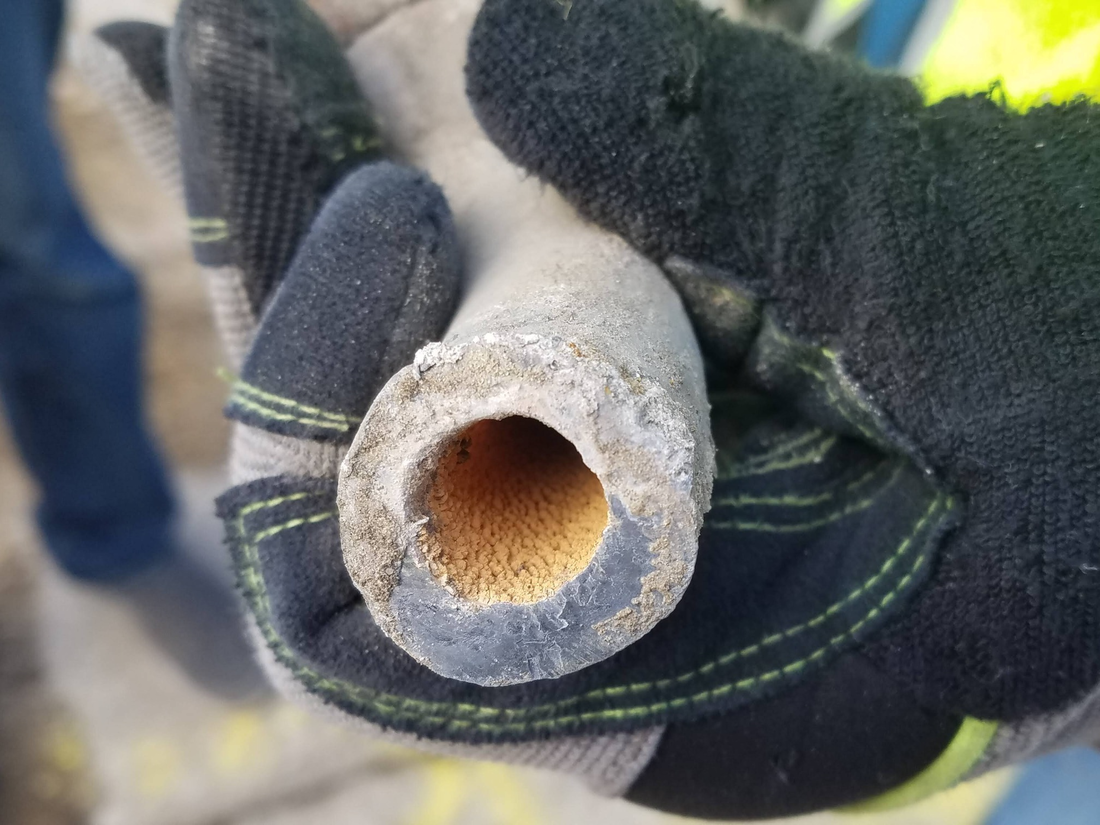 Last week, after decades of city administrations sweeping Chicago's lead water problem under the rug, Mayor Lori Lightfoot unveiled a plan for replacing the city's extensive network of lead service lines — something no previous mayor has been willing to tackle.

With 400,000 lead service lines lurking beneath Chicago homes, the city faces the worst documented lead line problem in the nation. These service lines — the pipes that connect the water main in the street to our faucets — are still used in about 80% of all Chicago homes, which can release lead into our drinking water.

Voluntary tests in Chicago have detected lead in more than two thirds of all homes tested, and about one third of all tested homes had more lead in their water than is allowed in bottled water.

And these service lines extend beyond households. From parks to schools, Chicago's lead problem permeates life in the city, posing health risks to residents — and especially children. National health authorities stress that no level of lead exposure is safe, as it can contribute to heart attacks, hypertension and kidney problems in adults and impulsivity and learning difficulties in children.

Over the years, Curious City has answered several of your questions about the lead in Chicago's water. So we thought it would be a good time to look back at how Chicago got its lead problem in the first place, how the mayor's plan will affect most Chicago residents in the short term and what people can do in the meantime to make sure their water is safe.

How did Chicago get — and keep — so many lead service lines?

If consuming even small amounts of lead poses dangerous health risks, some question askers wondered how the city installed so many lead service lines in the first place, and why they're still around. As it turns out, this is largely because of political clout and plumber-friendly building codes. The city's building code forced residents to install lead lines for decades and was only changed in 1986 when lead service lines were banned federally.

But this federal ban came after the approximately 400,000 lead lines were already in place — and they've been around ever since. In this video, first published in 2018, we go back more than a century to explore the people, politics and policies that helped to create and solidify Chicago's lead legacy. It's a reminder of how politics has long influenced the city's health policies — something citizens would do well to keep an eye on as this massive plan starts its roll-out.

While Chicago has been waiting, what have other cities been doing to address their lead problems?

Dozens of other cities started the process to remove their lead service lines — and some have even finished their replacement plans altogether.

In 2019, Curious City reported on what cities like Cincinnati, Ohio, and Gary, Ind., have done to address their lead problems. National experts say those cities have two of the best lead solution programs in the country. And Detroit, Mich., — a city with a lead water problem similar in size and scope to Chicago — has also been in the midst of a replacement process.

You can see what lessons Chicago could learn from cities that have already been working to get the lead out of water here.

What is Mayor Lightfoot's new plan?

The mayor estimates the plan will cost $8.5 billion (mostly from state and federal loans and grants, which have yet to be secured) and require "multiple decades" to complete, according to city documents.

Lightfoot announced "phase one" of the plan, which is broken down into three parts. The first part will allow low-income residents with proven high levels of lead in their water to apply for free lead service line replacements. These will be paid for through Community Development Block Grants, and the city will start accepting applications for the work at the end of the year, according to officials in the mayor's office.

The second part of the plan will offer residents who pay to get their service lines replaced a discount on the work by waiving some city permit fees required for this type of work. Lightfoot said the fee waivers could save homeowners up to $3,100 on a job that, in other cities like Newark, N.J., has cost between $5,000 and $10,000 per home. The mayor will introduce legislation to allow the waivers later this year. If the legislation passes, homeowners will be able to apply for the waivers early next year.

The third part of the plan is a pilot project to replace all the lead lines on a single city block (still to be determined) at the same time the water mains are replaced. The city has already replaced hundreds of miles of water mains without doing any residential lead line replacement work despite pleas from health advocates to pair the work. Other cities, like Detroit, say they've saved thousands of dollars per home by pairing the two projects since both require digging up the ground and accessing the connection between the water main and the service line. The city says it will apply for Illinois Environmental Protection Agency financial assistance for the project. 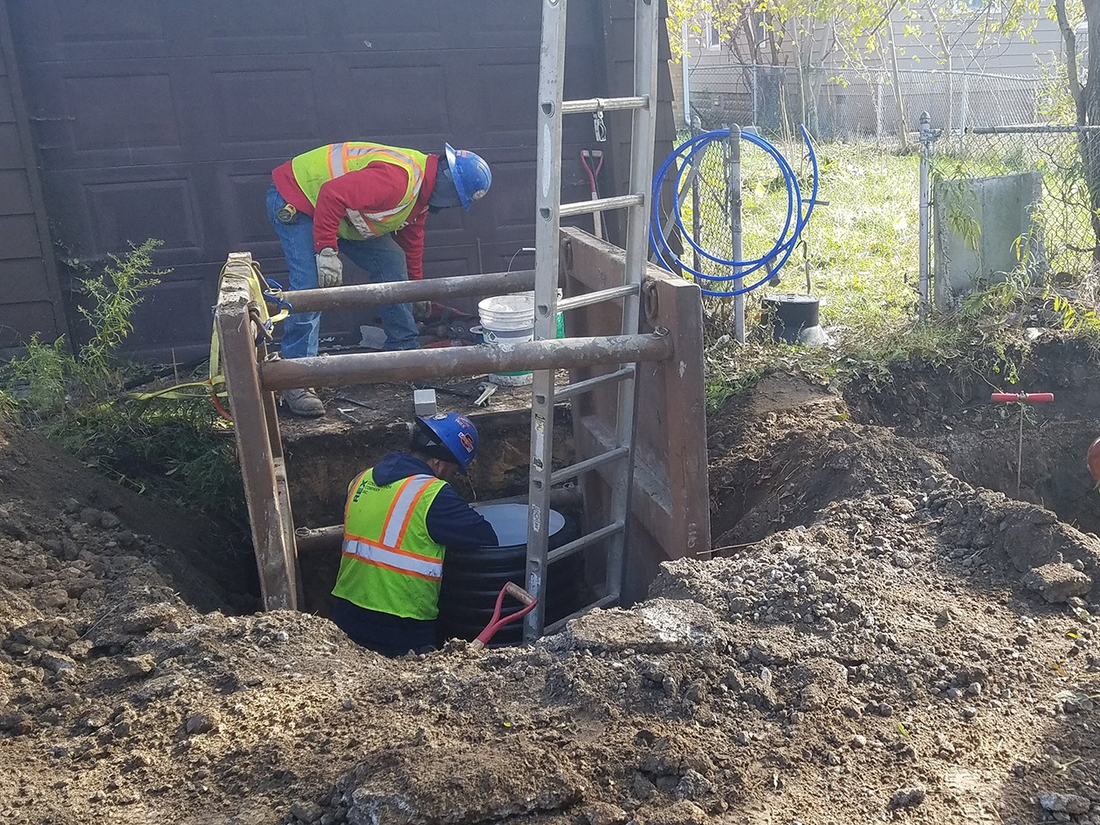 Crews work in Gary, Ind., to remove old lead water lines as part of a program that will be paid for by all Indiana American Water ratepayers. Monica Eng/WBEZ hide caption

The city doesn't expect to replace more than 1,000 lines during this initial year, and critics have pointed out that this rate of work would put us on pace to finally get rid of all the lead lines in a half a millennium. Depending on the provisions of a pending revised Lead and Copper Rule, the federal government may offer more funding to cities for an accelerated removal schedule but that remains to be seen. Either way, most Chicago homeowners probably won't see any big, government aided or mandated changes to their water in at least the next year.

What part of the plan is still unclear?

What citizens can watch out for, however, is who gets the city contracts to do the removal. WBEZ has asked Lightfoot, who was endorsed by the Chicago Plumbers Union, if her administration planned to put in place any safeguards to see that the union most responsible for forcing Chicagoans to install lead lines didn't become enriched by this massive project to remove them. WBEZ also asked if her office would ask for some sort of help from the union to help pay for all the work. The office responded with this statement:

Curious City reached out to the union for comment on its historic contribution to the problem and any plans to improve the situation, but they did not respond to our requests.

What should you do in the meantime to make sure your water is safe?

The new plan to replace Chicago's lead lines is expected to be a slow and gradual process, but there are precautions you can take in the meantime to increase the safety of your household water.

The EPA also offers a list of advice for Chicagoans who are concerned about lead in their drinking water.

Curious City will continue to follow the progress of the mayor's plan and what happens next. Keep sending us your questions about the water we drink.

Monica Eng is the reporter for WBEZ's Curious City. You can write to her at meng@wbez.org.