Accessibility links
From A Canoe Or Kayak, See Highlights Of Black History Along The Little Calumet River From an Underground Railroad site to "the most historic Black town in America," see local Black history on a new heritage water trail. 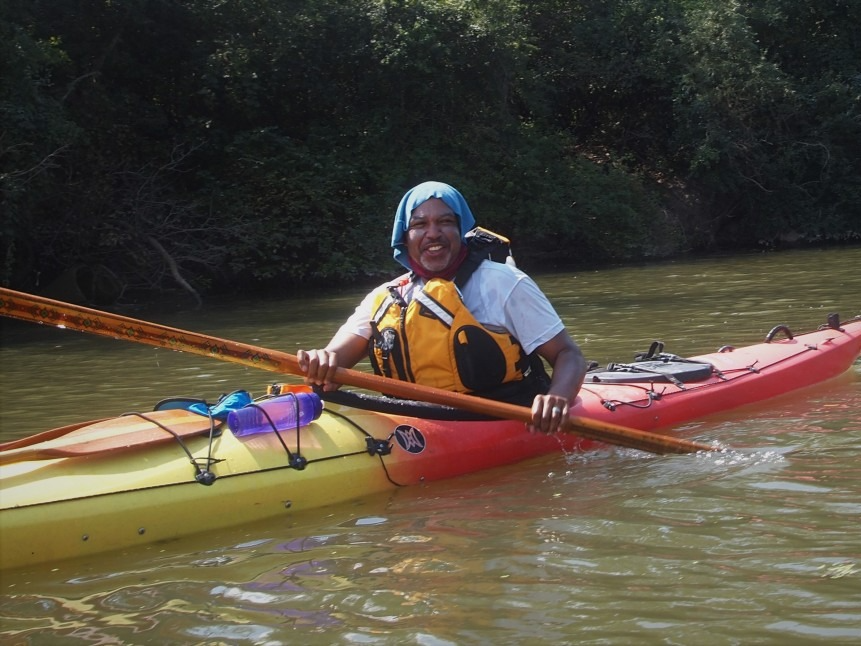 Openlands and partner organizations in the Chicago region have been working for years to improve the enjoyment and quality of local rivers.

That work includes designating more than 500 miles of "water trails" on the Calumet, Chicago, Des Plaines, Fox and other rivers, and creating an online guide to canoeing or kayaking on those waterways.

Now, Openlands and regional friends are making its first attempt at creating a historical tour on a waterway: the African American Heritage Water Trail along the Little Calumet River and the Cal-Sag Channel on the Far South Side. The trail takes in important people, places and events in local Black history going back more than a century.

The launch of the heritage trail this year fits with Openlands' goals of educating people about local waterways, encouraging them to get out in canoes or kayaks, and, hopefully, making them more interested in cleaning up rivers and creeks.

"If there's meaningful history along the waterway, we thought we could use the waterway to elevate that and try to connect people to the water," said Laura Barghusen, of Openlands.

The heritage trail starts at Forest Preserves of Cook County's Beaubien Woods boat ramp and continues west for seven miles along the Little Calumet and Cal/Sag, under I-57 to the Village of Robbins. 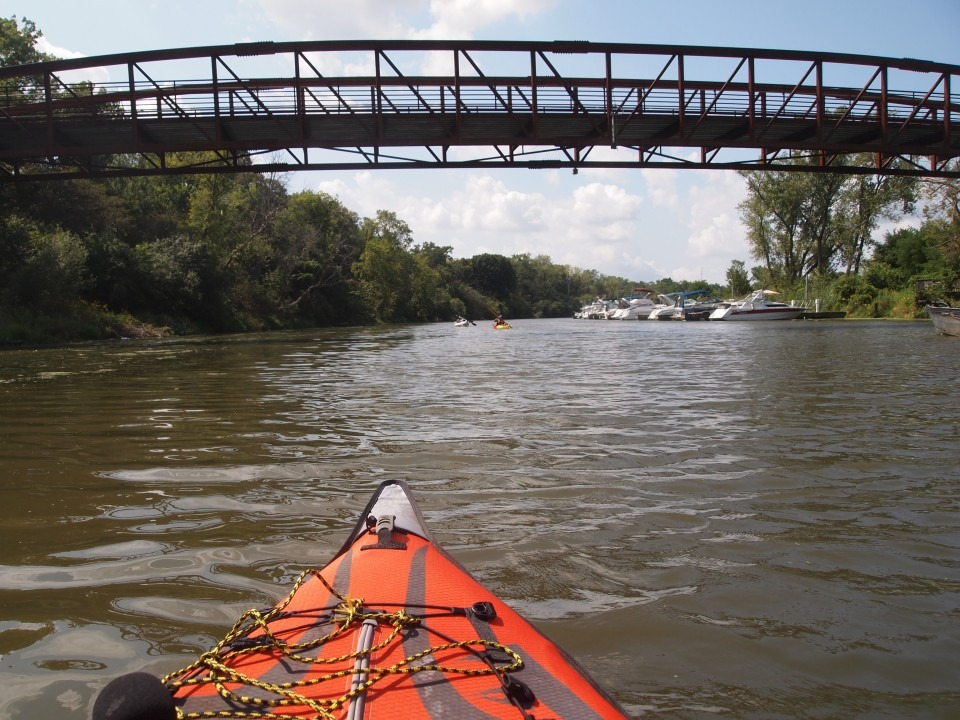 I recently took a paddle trip with Openlands to check it out. While the group is aiming for guided boat tours in the future, the heritage trail is self-guided. Some sections are beginner-friendly; others take a little more expertise. You can print a trail map and brochure to follow along.

The Calumet region is known for it's unusual contrast of heavy industry and bio-diverse natural areas, and the trail doesn't disappoint. Right from the start, a landfill mound greets boaters launching from Beaubien Woods.

As paddlers go by the Altgeld Gardens housing project, the map/brochure notes that 130th Street was renamed Hazel Johnson Way for the Black resident known as the mother of the environmental justice movement. Her group, People for Community Recovery, held corporate polluters and the government accountable for the high concentration of hazardous waste sites in the area.

The group worked with a young community organizer named Barack Obama and was recognized by Presidents George H.W. Bush and Bill Clinton. Johnson's daughter Cheryl continues her mother's work at the organization today.

An important historical site at the east end of the heritage trail is Chicago's Finest Marina, the first black-owned marina in the region. It was started in the 1950s so Black boaters could avoid discrimination at other marinas.

Adding to the historical significance of the site, it's located on what was Ton Farm, an important spot on the Underground Railroad. Freedom seekers making their way to Canada had to ferry across the Little Calumet adjacent to Ton Farm. 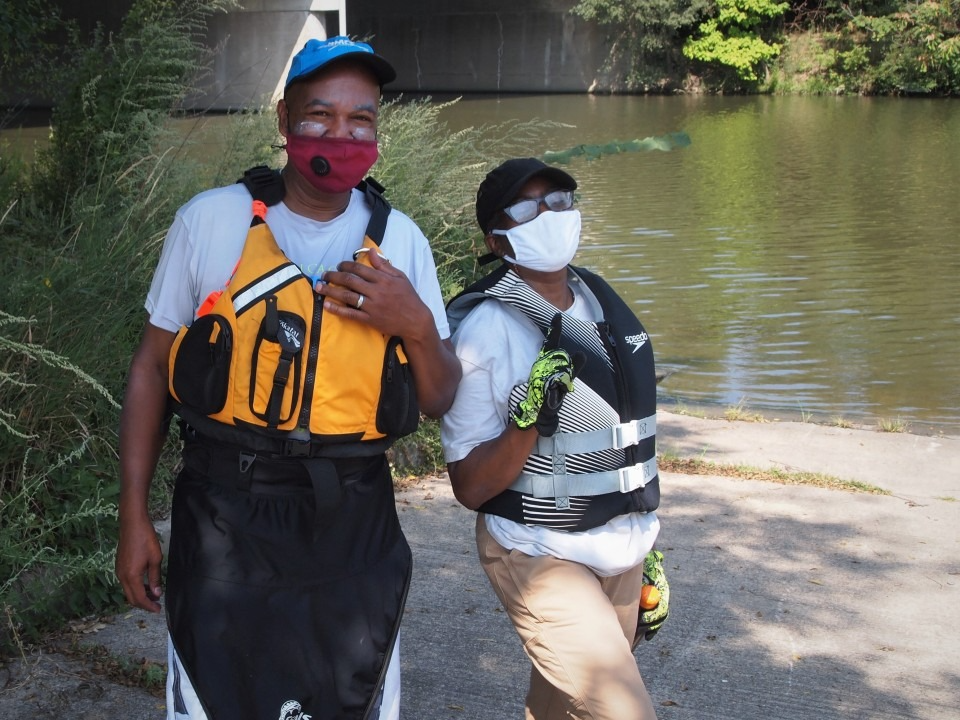 McClellan said the heritage trail provides a wonderful opening to the Underground Railroad story "because this simply has not been a given part of Chicago history or Illinois history, that we have this kind of rich set of encounters with thousands of people reaching their freedom by coming through Illinois."

Before going for a paddle on a section of the trail, I walked through Whistler Woods Forest Preserve with Openlands' Barghusen and Fatimah Al-Nurridin Harris, a native of the Calumet region.

Al-Nurridin Harris proudly sported her Calumet Heritage Area T-shirt. She has logged 16 years of restoration work at Whistler, and as she ticked off her other affiliations, she laughingly referred to herself as a "universal, all over, conservation restoration person."

Al-Nurridin Harris grew up living in the area's contrast of industry and nature, and her mother still lives near Altgeld Gardens.

"We smelled the toxic stuff. We the community felt it ... and we had a lot of cancer," Al-Nurridin Harris said. "So it was very important that we emphasize the beauty of it [Calumet], and I want to protect it."

At the back end of Whistler Woods is the start of the Major Taylor Trail, named for Marshall Walter "Major" Taylor, the Black cycling champion who started setting records in the late 1890's. He is buried nearby. 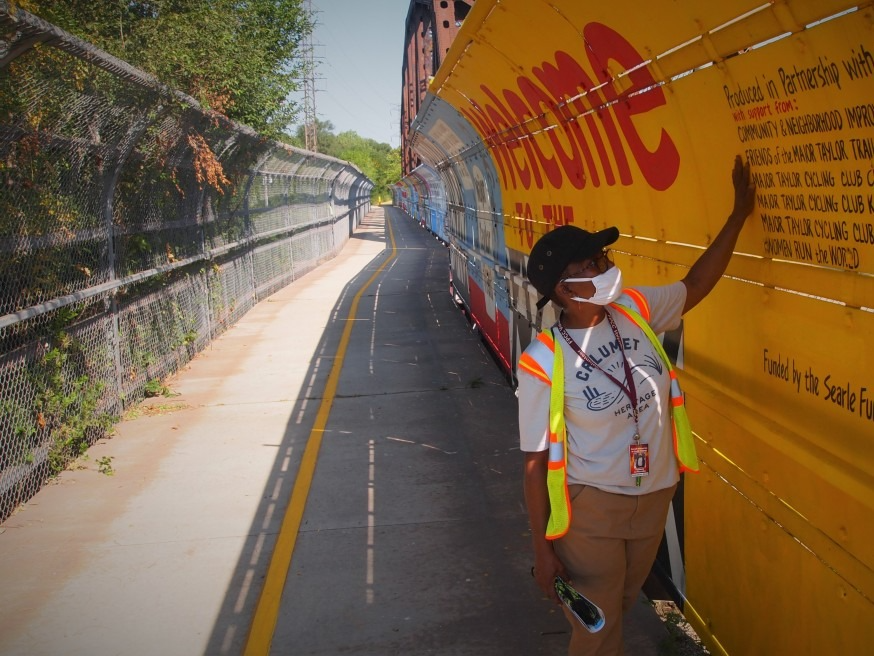 From there it's a short trip to the Little Calumet Boat Ramp. Michael Taylor, a "water trail steward" with the Illinois Paddling Council, met us there.

After some safety and paddling tips, we aimed our kayaks toward the conjunction of the Little Calumet and Cal-Sag. That's the main east-west drag of the heritage trail, but it also has recreational boaters and commercial traffic. We opted to turn around and take a pretty and easy paddle to the Calumet and Kickapoo Woods, part of the forest preserves system.

It's too shallow for motor boats, and as we paddled, Taylor explained this stretch offers a great kayaking or canoeing opportunity.

"Other than the occasional truck that passes by, you wouldn't know that you're on the South Side," he said. "You could very well be in some location up in Wisconsin or Michigan or close to the Boundary Waters. It meanders around and will be like this for a couple of miles. Not a soul in sight."

Although there's some fine paddling here, Taylor said the locals don't do it much.

One of the goals of the heritage trail is to inspire more people to get boats on the water. Openlands wants to use big canoes for guided tours to educate people about the local history and introduce them to paddling.

But Openlands also wants people to care about clean water and the quality of local rivers. As Barghusen put it: "Get the people engaged, get them connected, and then improve the waterway." 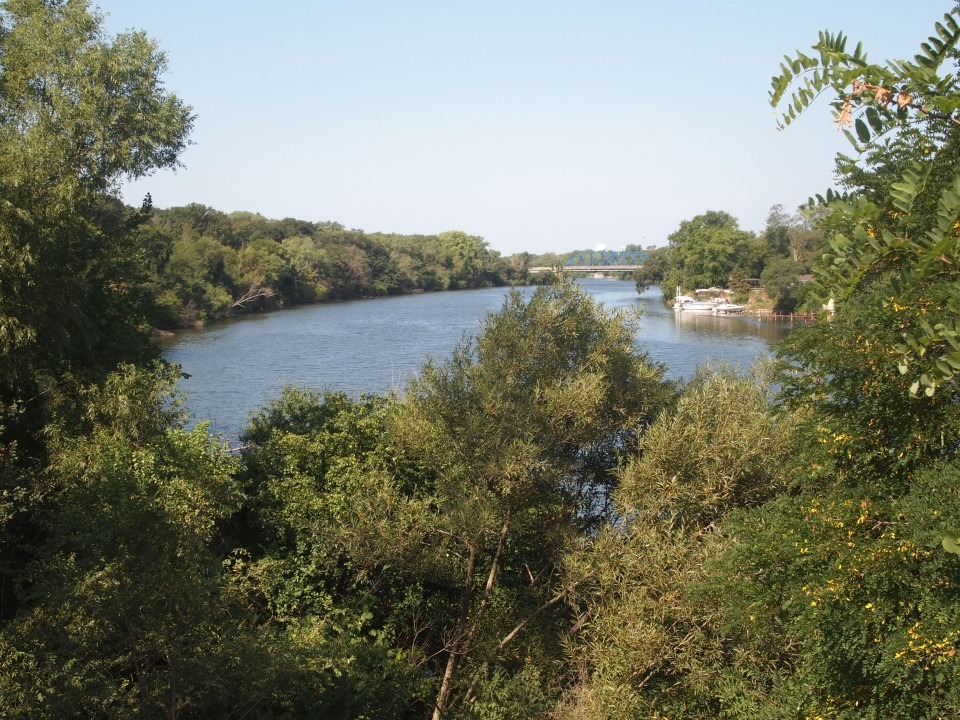 The end of the heritage trail is near Robbins, a small suburb settled by Black people in the late 19th century. Former NBA star Dwyane Wade and actors Mr. T and Nichelle Nichols (Lt. Uhura in the original Star Trek) spent time in Robbins. The town also had its own airport where some of the original Tuskegee Airmen trained for World War II.

Tyrone Haymore from the Robbins History Museum boasts that it's "the most historic Black town in America." He's raising funds to relocate the museum to a site closer to the heritage trail.

"One of the things that's really astonishing is that there is so much history that is available right around us, but we simply don't see it," historian McClellan said.

After paddling along the heritage trail, I'd have to agree.

Jerome McDonnell covers the environment and climate for WBEZ. Follow him @jeromemcdonnell.

A previous version of this story misspelled the names of Laura Barghusen, Nichelle Nichols and Larry McClellan.