Accessibility links
Chicago's Homeless Add COVID-19 To Their Winter Worries Chicago's homeless already worry about where to safely sleep when the cold arrives. COVID-19 is making that harder. 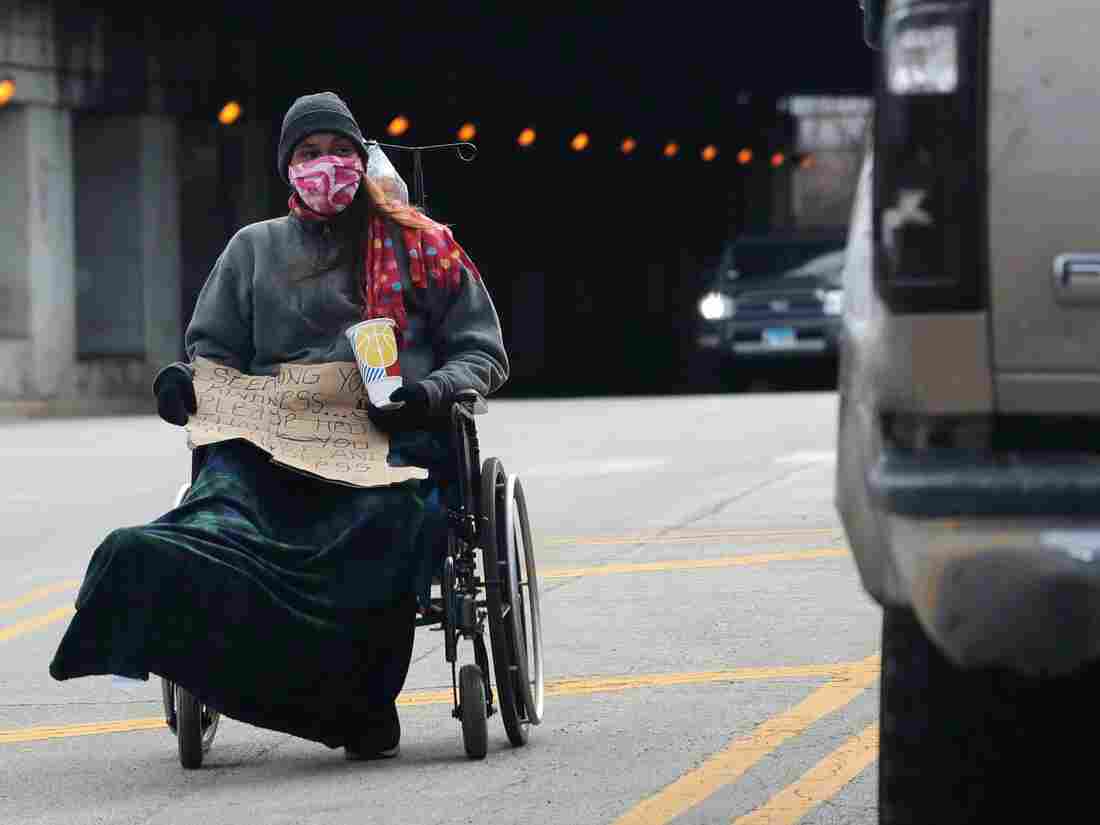 When COVID-19 hit, the so-called mayor of the homeless viaduct-covered tent city in the Uptown neighborhood on the North Side added a few COVID-19 protocols to the rule list:

No using the coveted panhandling spot for more than your allotted two hours.

And now, you've got to wear a mask while doing so.

"You don't know if the donor that's bringing you the money, if they've got the virus," Tom Gordon said. "If you ain't wearin' that mask, you've got to get off the corner. My rules. And that protects everybody down here."

All 20 of the encampment's residents are getting tested as often as possible, when nurses or doctors visit the encampment for that specific purpose. And no one has tested positive for COVID-19 so far, Gordon said.

Six months after the pandemic first hit, the impact of COVID-19 on the homeless population across the country has not been as devastating as advocates anticipated, according to a report by the Associated Press.

Here in Chicago, advocates tell WBEZ that's due to the work of people like Gordon, who are taking proper precautions, but also to a grassroots coalition of volunteer doctors who quickly organized at the start of the pandemic.

"I did not expect this organization or this effort to become as big as it has become," said Dr. Steve Rothschild, of Rush University Medical Center, who helped start the group, now known as CHHRGE, or the Chicago Homelessness and Health Response Group for Equity.

What started as a phone call between a few people about a West Side shelter Rothschild volunteered at soon grew into a massive coalition, including three city agencies, numerous hospitals, shelters, advocacy groups and more.

"You know, we worked with donors and with our students to distribute PPE to all the shelters. We created screening protocols so that shelters could evaluate 'Is this someone with symptoms, we need to get testing for?'" he said.

They, along with the Chicago Coalition for Homeless, and homeless people themselves, pushed the city to provide Porta-Potties and sinks at homeless encampments to make up for closed libraries and stores.

They, with the city, helped organize and open Hotel 166, which gave people who were at risk of complications due to COVID-19 a place to stay isolated. CHHRGE also developed a team of doctors that does testing at shelters and encampments.

The Chicago Department of Public Health points to these coordinated programs, including mass testing and available isolation housing, for helping to contain COVID-19 rates. Those rates topped at more than 50% in some large shelters in April, CDPH said in response to WBEZ questions, but has dropped down to less than 2% percent positivity for the past three months.

But while Rothschild says he's proud of the work the CHHRGE has done so far, the winter is bringing new concerns.

"We are anticipating the number of people seeking shelter will rapidly increase in the next couple of months," Rothschild said, in part because fewer people will be willing to stay outside and also because he also suspects an increase in overall homelessness due to the pandemic.

"Especially for people who are doubled up, or vulnerably housed ... the flu hasn't gone away, so the minute somebody starts coughing, you know, whoever's housing them is going to say 'You need to get out of here. I'm not keeping you in my house anymore.' So I think the biggest issue is going to be evictions and poverty."

Several experts echoed his concern, including Julie Dworkin, the policy director at the Chicago Coalition for the Homeless.

"We're expecting to see a surge in homelessness, especially if the eviction ban gets lifted," Dworkin said.

Currently, the state of Illinois has banned landlords from evicting tenants who are failing to pay their rent. Though the governor has been extending it on a month-by-month basis, that moratorium is currently scheduled to expire in late October.

The fact that homelessness could increase at a time when shelters are forced to decrease capacity in order to keep people 6 -feet apart is concerning, Dworkin said.

The Chicago Department of Family Support Services, which oversees third-quarters of the city's roughly 4,000 shelter beds, said it's continuing to operate five additional sites to account for decreased capacity.

But neither Dworkin nor Rothschild were interested in talking much about short-term solutions such as increased shelter capacity, or, for instance, new tents or sleeping bags for people living the street.

"I don't think that, you know, we want to focus on improving the quality of life for someone living on the street, I think we want people to not be on the street, Dworkin said. "And the only way to do that is to find resources to create permanent housing."

The city has found at least one of those resources. It's allocating millions of dollars from the Coronavirus Aid, Relief, and Economic Security (CARES) Act to provide housing to the most vulnerable, meaning more than 1,000 homeless Chicagoans will get an apartment.

"But I don't know that there's going to be enough of these subsidies or whether people will be able to find housing quickly enough," Dworkin cautioned. "And the other problem with them is that they're going to run out in one to two years, and then folks will need a long term permanent solution so that they can have a stable home."

Back under the bridge in Uptown, that message — the need for a long-term housing solution — is one some residents reiterated.

He's had anxiety about a string of stabbings that targeted homeless people in Chicago this year. And he himself got shot, just a few months ago near his encampment.

"The only thing that could really save everybody from an experience like me is, you know, there's a lot of violence against [the] homeless going on, and homelessness could be cured with housing."