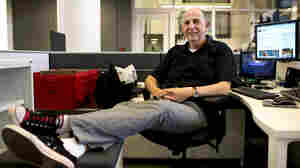 Mark Memmott: All packed up and ready to move on to a new role at NPR. Meredith Rizzo/NPR hide caption

Before This Blogger Moves On, He Wants To Say Thanks

April 25, 2014 • As he prepares to take on a new role at NPR after nearly five years with The Two-Way, Mark Memmott wants to say, "See you later." 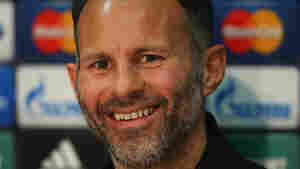 Ryan Giggs, who is filling in as manager of Manchester United, one of the world's most valuable and most popular soccer clubs. He's vowing to make fans proud of the team again. Alex Livesey/Getty Images hide caption

April 25, 2014 • David Moyes lasted less than a season as manager of the English football (soccer) club. Longtime star player Ryan Giggs is filling in and says this is "the proudest moment" of his life. 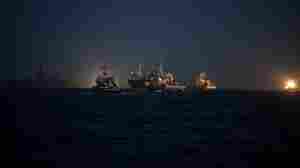 Crews aboard ships involved in the recovery effort at the site where a South Korean ferry sank continued to work as night fell Thursday. Nicolas Asfouri/AFP/Getty Images hide caption

April 25, 2014 • Authorities say divers are finding it harder and harder to get into places where passengers' bodies are still trapped. On Friday, 185 deaths had been confirmed. Another 117 people remained missing.

April 25, 2014 • The crisis in Ukraine and Russia's struggling economy have led many investors to pull their money out of Russia. So Standard & Poor's moved Friday to downgrade the nation's rating. 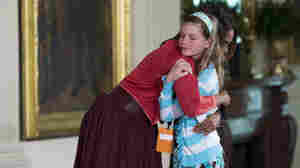 April 25, 2014 • "My dad's been out of a job for three years," the 10-year-old told Michelle Obama. The youngster's mother says the family didn't know the girl would do that. 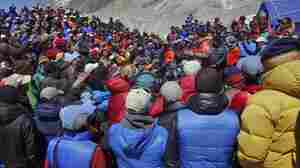 A Nepalese government delegation met with Sherpa mountain guides near Mount Everest's base camp on the south side of the mountain Thursday. The government was hoping to persuade the guides to continue working even though 16 Sherpas had died a week earlier. But fresh ice avalanches on Friday appear to have doomed Nepal's climbing season. Adrian Ballinger/Alpenglow Expeditions/AP hide caption

Fresh Avalanches On Everest Appear To End Climbs In Nepal

April 25, 2014 • One week after 16 Sherpas were killed, new ice falls have likely ended the chances of any summit attempts this year on the mountain's south side. Expeditions continue from the north. 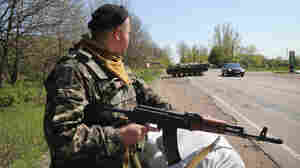 On guard: a Ukrainian soldier at a roadblock near Slovyansk, in eastern Ukraine. Scott Olson/Getty Images hide caption 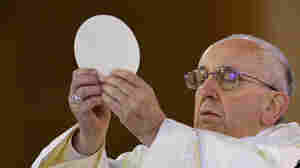 April 24, 2014 • Word about what the pope reportedly said when he called a woman in Argentina set off speculation that he wants to reverse church teachings. His spokesman says that's reading too much into the story.

April 24, 2014 • The Israeli Cabinet on Thursday endorsed Prime Minister Benjamin Netanyahu's decision to suspend talks because the Palestine Liberation Organization and Hamas are moving to form a unity government. 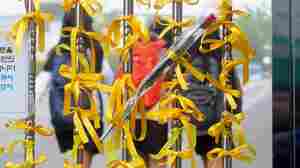 Yellow ribbons hang from a fence outside Danwon High School in Ansan, South Korea, as some students return Thursday for the first time since a ferry disaster claimed the lives of scores of their classmates. Yang Ji-woong /EPA/Landov hide caption

April 24, 2014 • More bodies were recovered Thursday from the ship, which sank last week. So far, at least 171 deaths have been confirmed. Another 131 people, many of them students from one school, remain missing. 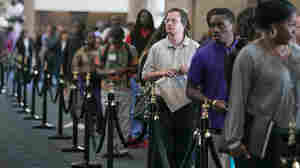 More than 3,600 people lined up to apply for about 1,000 openings at a job fair earlier this month in New Orleans. Ted Jackson /The Times-Picayune/Landov hide caption

April 24, 2014 • The 329,000 applications filed last week for unemployment insurance were more than economists expected. One theory: Easter's relatively late date may have skewed the numbers. 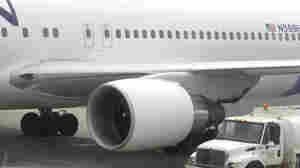 Hawaiian Airlines Flight 45 after its arrival on Monday at Maui's Kahului Airport. After the same flight landed on Sunday, a California teen emerged from the left rear wheel well. Oskar Garcia/AP hide caption

Stowaway Teen's Father Was Shocked To Hear Son Was In Hawaii

April 24, 2014 • The 15-year-old boy hid in the wheel well of a jet that flew Sunday from San Jose, Calif., to Maui. Though temperatures plunged and oxygen was scant, he survived. The father says Allah "saved him."

No Breakthrough: 'Object Of Interest' Isn't From Missing Jet

April 24, 2014 • A large piece of metal was found this week along the coast of western Australia. But authorities are convinced it is not debris from Malaysia Airlines Flight 370, which disappeared on March 8. 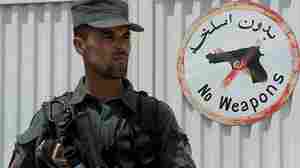 April 24, 2014 • Authorities say an Afghan security guard opened fire. One victim was a doctor from Chicago. The other two were reportedly a father and son. Another U.S. citizen is said to have been hurt. 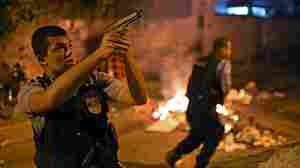 An officer from Brazilian Police Special Forces took aim Tuesday during the violent protest that broke out in one of Rio de Janeiro's slums. People there blame police for a young man's death, and say authorities are clamping down too hard in advance of this June's World Cup soccer tournament and the 2016 Summer Olympics, both of which will be held in Brazil. Christophe Simon /AFP/Getty Images hide caption

7 Weeks Before World Cup, Rio Is Rocked By Riot

April 23, 2014 • Angry residents of a favela, or slum, set fires and threw bottles after a young man's body was found. They blame police for his death. Authorities have stepped up security in advance of the World Cup.