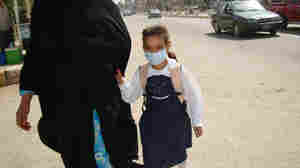 An Iraqi schoolgirl wears a protective mask as she is walked to school in the central Iraqi city of Kut, Oct. 19, 2009. Panic over swine flu prompted officials in Iraq to close about 2,000 schools in a bid to combat the virus. Ali al-Alak/AFP/Getty Images hide caption

October 31, 2009 • Fewer than 500 cases of H1N1 have been reported in Iraq, but it's not uncommon to see schoolchildren walking home wearing surgical masks. Fear of the virus has caused a rash of school closures, and is even preventing some Iraqis from making this year's pilgrimage to Mecca.

October 29, 2009 • The deadlock over Iraq's election law is threatening to become a full-blown crisis. Without a deal by this weekend, Iraq will run out of time to organize an election before the government's term expires. A long delay might even trip up the pace of American troop withdrawal.

October 26, 2009 • A double car bombing in Baghdad Sunday was the worst to hit the Iraqi capital in two years. Scores of people were killed. The violence is most likely political in nature, and there could be more incidents to come because Iraq's political season is just beginning.

October 15, 2009 • At issue in the dispute is whether voters will choose a political party or individual candidates. The party option used four years ago simplified the process and protected individuals from violence, but most Iraqis agree it's better to cast a vote for a candidate. Parliament must pass an election law if polls are to take place in January. 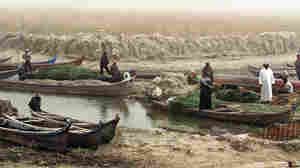 Iraqi fishermen and farmers prepare to sail in the marshes, north of the southern city of Basra, last year. The new textbooks include a section on Saddam Hussein's order to drain the marshes as a way to drive out Shiite opposition in the 1990s. Essam al-Sudani/AFP/Getty Images hide caption

October 14, 2009 • Students in Iraq will open new textbooks this school year that reflect the enormous changes the country has been through and include historical events that were once forbidden topics. Many of the fawning references to the former dictator have also been excised.

October 12, 2009 • In Iraq, the apparently coordinated explosions that rocked the capital of Anbar province also destroyed what had been a growing sense of security.

Bombings Strike Iraqi City That Was Model Of Peace

October 12, 2009 • The U.S. military pacified some of the most violent areas of Iraq in part with money, paying tribal militias to turn back al-Qaida. Thanks to the militias, western cities have been relatively calm — until Sunday, when a triple car bombing struck Ramadi.

Bombings Strike Iraqi City That Was Model Of Peace

October 8, 2009 • In upcoming Iraqi parliamentary elections, Prime Minister Nouri al-Maliki's coalition faces stiff competition from an alliance of Shiite religious parties with backing from Iran. Some Iraqis are starting to view the election as a referendum on how secular Iraq's next government will be. 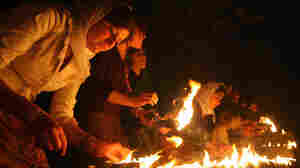 Iraqi Yazidis light candles outside Lalish temple, east of the Iraqi city of Mosul, during a ceremony to celebrate the Yazidi New Year, April 17, 2007. The Yazidis, a tiny religious minority numbering fewer than 1 million, are caught in the middle of a territorial dispute between Iraqi Kurds and Arabs, as well as attacks by al-Qaida. Safin Hamed/AFP/Getty Images hide caption

October 7, 2009 • The U.S. military is pushing a plan to get Arabs and Kurds to cooperate in the country's north. Many of Iraq's other minorities live in the most hotly contested seam between the Kurdish region and the city of Mosul. Adding to their woes, al-Qaida is also targeting the area.

October 3, 2009 • The U.S. commander in Iraq has proposed joint patrols in the country's north. Baghdad initially rejected the idea. U.S. military leaders say such measures are already working, but some Iraqi politicians fear they might help Kurds keep control over towns they have occupied since 2003. 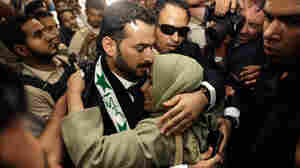 Iraqi reporter Muntadhar al-Zeidi embraces his sister upon arrival at the Al-Baghdadya television station after his release from prison in Baghdad on Tuesday. The reporter who hurled his shoes at then-U.S. President George W. Bush was released from prison on Tuesday, his brother said. hide caption

September 15, 2009 • Muntadhar al-Zeidi was released from prison Tuesday. The Iraqi journalist, who served only nine months of a three-year sentence, was imprisoned for hurling his shoes at then-President Bush at a news conference last December. 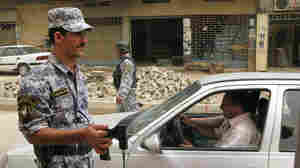 September 3, 2009 • Iraqi security forces are using a simple hand-held device that they claim is effective in detecting potential car bombs. The "sniffers" are deployed at roadside checkpoints throughout the country. But U.S. military officials say the science behind the devices is suspect at best. 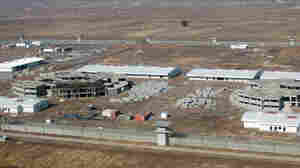 The Khan Bani Saad Correctional Facility, located about 12 miles northeast of Baghdad, is seen from the air in this June 2007 photograph. The U.S. Army Corps of Engineers canceled the $40 million project three years ago because it was so poorly built. Locals call the unfinished site "The Whale." AP/Special Inspector General for Iraq Reconstruction hide caption

August 3, 2009 • Recent audits released by the U.S. government show a mixed legacy of America's $50 billion reconstruction effort in Iraq. The reports highlight how the U.S. military is deeply involved with the reconstruction of Iraq — and how it may be tricky to draw down and transfer authority to the Iraqis.

July 30, 2009 • Members of an Iranian opposition group have been complaining of a deadly crackdown by Iraqi authorities. The People's Mujahideen, known by its initials MEK, has lived in a cloistered camp inside Iraq for decades and been under U.S. military protection until the beginning of this year. This week, some members of the group were killed when Iraqi police tried to enter the camp.

July 27, 2009 • One of the most useful security tools is also one of the most difficult for Iraqis to accept because of a cultural taboo. Sniffer dogs are universally recognized as the most effective means of detecting explosives, but Iraqis consider dogs unclean.