March 29, 2018 • The departure of Veterans Affairs Secretary David Shulkin does not end the debate over how far the agency should privatize. Neither the president nor his nominee have given their views on the subject.

March 29, 2018 • In a tweet on Wednesday, the president said he intends to nominate Navy Rear Adm. Ronny Jackson, the White House physician, to lead the Department of Veterans Affairs. 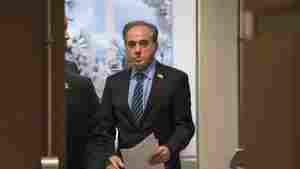 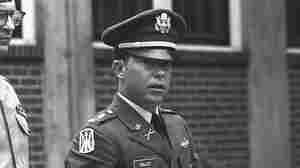 March 16, 2018 • American soldiers in Vietnam killed more than 500 civilians in a period of four hours on March 16, 1968, in the village of My Lai. The atrocity continues to challenge America's image of itself.

March 5, 2018 • A sting by the Washington state attorney general has proved what was long believed through anecdotal evidence to be rampant — housing discrimination against veterans.

February 21, 2018 • Veterans Affairs Secretary David Shulkin is being criticized for charging his wife's travel to the government when she accompanied him to Europe. Shulkin says he complied with all ethics guidelines, but his chief of staff, also criticized for her role in arranging the trip, has announced her retirement.

February 6, 2018 • The politics of medical marijuana are changing as veterans turn to the drug to treat service-related conditions. Trump administration efforts to enforce anti-pot laws have faced bipartisan pushback.

February 2, 2018 • After President Trump said Americans should stand for the national anthem, the organization AMVETS issued a TV spot called "Please Stand." It says it's been misunderstood and politicized.

November 10, 2017 • A "cross-partisan" group called With Honor has formed to support military veterans running for Congress. The group hopes to assist 25 to 35 candidates from both parties in 2018 elections. 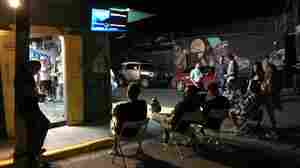 Puerto Ricans who could find a TV screen connected to a generator and a satellite link took advantage of the final game of the World Series to get a much needed diversion. Six weeks after Hurricane Maria, only about a third of the territory has power. Quil Lawrence/NPR hide caption

In Puerto Rico, A Couple Of Hours Of 'Normal' During The World Series

November 2, 2017 • Dozens of Puerto Ricans from all walks of life pulled up lawn chairs and stools in the middle of the street in San Juan to watch the final game between the Houston Astros and the L.A. Dodgers.

October 31, 2017 • The oversight board that supervises Puerto Rico's indebted government met publicly today for the first-time in the aftermath of Hurricane Maria. The board heard sobering statistics about the extent of the damage and discussed austerity measures to fix the island's broken economy.

October 26, 2017 • A new study by the U.S. Department of Veterans Affairs suggests that even mild exposure to blasts in Iraq and Afghanistan may cause long term breathing problems.