May 31, 2010 • Through decades of war in Iraq, Dr. Afan Hawrami has perfected his orthopedic techniques on refugees and soldiers. International aid groups recruited him to work in field hospitals as far afield as Afghanistan and Cambodia. But Hawrami worries that Iraq's time of violence may not be over.

May 25, 2010 • The Afghan government did something unprecedented this past weekend; it left the capital Kabul. About half of the Cabinet ministers traveled to the remote capital of Bamiyan province to spend three days planning for this summer's donor conference. But when they went to leave, an angry crowd threw stones at the delegation. 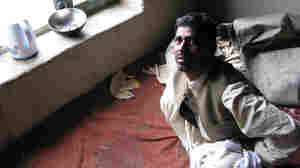 Afghan farmer Raifudin Kushkaki shows the spot in his home where he says his 16-year-old son bled to death during a May 14 U.S.-Afghan military raid near Jalalabad, in eastern Afghanistan. Kushkaki says the raid killed nine innocent civilians. U.S. officials say the raid targeted and killed a Taliban operative. Quil Lawrence/NPR hide caption

May 24, 2010 • The U.S. says a recent midnight raid in the eastern Afghanistan city of Jalalabad killed a Taliban operative. Afghans say the botched attack killed only civilians. It's the latest incident to highlight the dispute over casualties and contribute to Afghan distrust of U.S. forces.

May 24, 2010 • Three high-profile attacks in Afghanistan last week, indicate the Taliban are not going to sit idly by as the U.S. military prepares to launch a new offensive. Militants have mounted a series of bold attacks on U.S. forces in Afghanistan.

May 18, 2010 • A Taliban militant crashed his explosives-laden car into a NATO convoy in the heart of Kabul, killing six Western soldiers -- five of them American -- and a dozen Afghans. It was the first major attack in the capital since February.

April 26, 2010 • Former Prime Minister Ayad Allawi's electoral bloc won two more seats than that of sitting Prime Minister Nouri al-Maliki. But just as that result was to be confirmed, an Iraqi judge ordered a recount of votes cast in Baghdad — which could erase Allawi's lead. In an interview with NPR, Allawi has threatened to reject the court's decision.

April 20, 2010 • Iraq's prime minister announced Monday that the two top leaders of al-Qaida in Iraq had been killed. At the same time, there was a setback for that country's hopes of seating an elected government anytime soon. A judge ordered the manual recount of 2 million votes that were cast in Baghdad.

April 19, 2010 • The U.S. military confirmed Monday that Iraqi security forces had killed the two top leaders of al Qaida in Iraq. Meanwhile, a review panel has ordered a recount of election results, raising the possibility of a change in the inconclusive results. Almost any change could exacerbate tensions in Iraq. And just having a recount ends any American hopes that a new government will be in place by the end of summer, when U.S. forces are due to withdraw.

April 15, 2010 • Postelection deal-making in Iraq appears to be extending beyond the country's borders. First, key Iraqi leaders flew to Tehran, prompting concern about Iran's influence. Now, a flurry of Iraqi politicians, starting with the president, have met with the Saudi king in Riyadh. 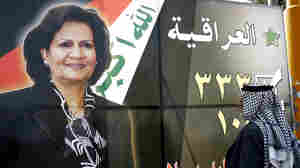 In this photo from February 2010, an Iraqi man in Baghdad looks at a campaign poster for a woman candidate running in Iraq's March elections. By law, 25 percent of Iraq's parliament must be female — which means replacing men who would have won seats. Ali al-Saadi/AFP/Getty Images hide caption

Iraqi Women Gear Up For Greater Role In Politics

April 15, 2010 • When Iraq finally forms a new government, there will be many new female faces. By law, 25 percent of parliament must be female. In some cases, that means replacing men who would have won seats, which is isn't always welcome news.

Iraqi Women Gear Up For Greater Role In Politics

Iraqis: It's Taking Too Long To Form A Government

April 12, 2010 • Five weeks have passed since the general election but there's still no sign that a government will be formed anytime soon. Political leaders don't seem terribly concerned that so much time has passed. But regular citizens worry about what will happen to them in the meantime.

Iraqis: It's Taking Too Long To Form A Government 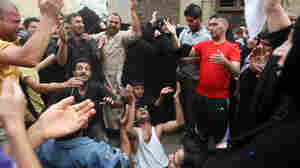 Family members mourn Wednesday at the funeral of a victim killed in a bomb attack in Baghdad's Alawi district, a day after six bombs in the capital killed at least 35 people. The outburst of violence is intensifying fears that insurgents are making a return after a postelection political impasse. Ahmad al-Rubaye/AFP/Getty Images hide caption

April 7, 2010 • Insurgents in Iraq appear to be taking advantage of political gridlock after the country's March 7 election by launching attacks on the government and civilians. More than 100 people have died in bombings and massacres over the past five days, and Iraqis fear a return to the bad days.

Random Attacks On The Increase In Iraq

April 7, 2010 • In Iraq, the formation of a coalition government may be many weeks away, even though elections took place a month ago. As the deadlock drags on, the violence has spiked. More than 100 people have been killed since last Friday.

Random Attacks On The Increase In Iraq 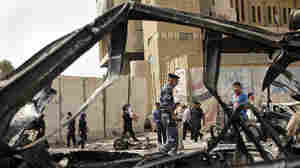 Iraqis inspect the site of a car bomb attack Sunday near the Iranian Embassy in Baghdad. Karim Kadim/AP hide caption

April 5, 2010 • Iraq's elections last month left no clear winner, promising months of horse-trading among the Shiite, Sunni and ethnic Kurdish blocs. Iran has not been shy about asserting influence. A recent bomb attack near the Iranian Embassy in Baghdad underscores the importance of Iraq's neighbor. 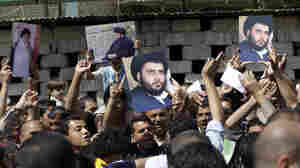 Iraqi supporters of the Shiite cleric Muqtada al-Sadr gather Friday in a Shiite suburb of Baghdad for a vote on five leading candidates for prime minister in an unofficial referendum. The Sadrists say the purpose of the vote is to let the movement's leadership know whom ordinary people want as their next leader. Ali al-Saadi/AFP/Getty Images hide caption

April 2, 2010 • The followers of anti-American Shiite cleric Muqtada al-Sadr — once dismissed merely as a militia — have shown a sophisticated understanding of politics and elections. They are currently voting in a straw poll for prime minister. As a result, the movement may hold the key to Iraq's next government.