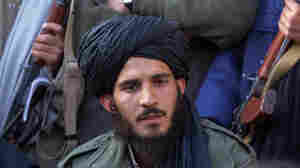 The Taliban's Likely Negotiator With The U.S.

July 22, 2011 • Most observers in Kabul now believe the U.S. has met face to face with a Taliban envoy, and the most likely interlocutor is Tayyeb Agha. He's thought to be one of a few people with regular access to Taliban leader Mullah Omar.

The Taliban's Likely Negotiator With The U.S.

July 18, 2011 • In Afghanistan, a close adviser to President Hamid Karzai has been killed. It was the second killing in recent days of one of Karzai's allies. Last week, Karzia's half-brother was killed in the southern city of Kandahar. 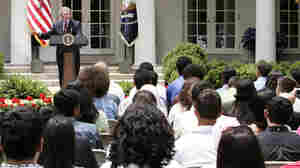 Former President George W. Bush speaks to student from the Youth Exchange and Study program at the White House in 2005. The program began in 2004 and ended for Afghan students this year after half of those enrolled fled to Canada. Alex Wong/Getty Images hide caption

July 14, 2011 • The program sent Afghan students to U.S. high schools for a year, but many fled to Canada seeking asylum and fearing a dark future in Afghanistan. One student who left Texas for Toronto said his family received threats for sending their son to the West and thought he'd be in danger if he returned. 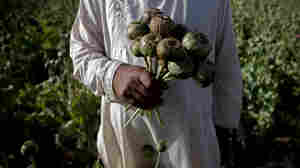 An Afghan holds a bouquet of poppies near the city of Kandahar, Afghanistan. Majid Saeedi/Getty Images hide caption

July 13, 2011 • Afghanistan produces most of the world's opium poppy. As foreign aid money starts to shrink, the drug money may overwhelm attempts at a legitimate economy.

July 12, 2011 • One of the most powerful figures in the Afghan government has been assassinated. Ahmed Wali Karzai, brother of the president, was shot dead, apparently by one of his own security men in the southern city of Kandahar where he headed the provincial council.

July 12, 2011 • In Afghanistan, the half-brother of President Hamid Karzai was assassinated at his home in the southern part of the country, in the city of Kandahar Tuesday. Ahmed Wali Karzai was repeatedly accused of corruption and of having links to drug trafficking, yet the Afghan president continued to defend him.

July 6, 2011 • Afghan parliamentarians are struggling to hold a unified line against what they see as an unconstitutional push by President Karzai to overturn 25 percent of last September's parliamentary elections. The continuing deadlock has tarnished all sides and exposed the fragility of Afghan democracy.

June 29, 2011 • The Afghan capital Kabul is still reeling from an attack on the Inter-Continental Hotel early Wednesday. NATO helicopters helped to end the standoff which lasted for nearly five hours.

June 28, 2011 • Militants struck the Inter-Continental hotel, killing at least seven people and wounding at least eight others in a more than five-hour attack that ended when NATO helicopters killed gunmen on the roof of the hotel. The Taliban claimed responsibility for the attack.

Head Of Kabul Bank Resigns While In The U.S.

June 28, 2011 • Now, another twist in the story of Kabul Bank and the $900 million bailout of what was Afghanistan's premier lending institution: The head of Afghanistan's central bank has resigned while on a visit to the U.S., claiming that the government of President Hamid Karzai was not only thwarting his investigation into the failed bank, but that he was being threatened by politically connected shareholders.

Head Of Kabul Bank Resigns While In The U.S. 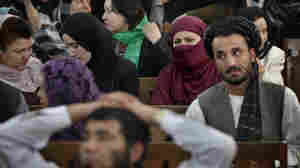 Defeated candidates from Afghanistan's September 2010 election wait for the resumption of proceedings of a special tribunal in a Kabul courtroom on Thursday. The tribunal decided that 62 members of Parliament would be replaced on fraud charges. Gemunu Amarasinghe/AP hide caption

June 28, 2011 • A tribunal appointed by Afghan President Hamid Karzai has decided that 62 members of Parliament will be replaced on fraud charges. Some candidates who said they had been robbed of their seats claimed victory, but there's controversy over whether Karzai had the authority to create the tribunal.

Afghans Divided On When U.S. Troops Should Leave

June 23, 2011 • President Obama has told the nation that he's pulling 33,000 troops from Afghanistan by next summer. About 10,000 of those troops will be withdrawn by the end of the year. How was the announcement received in the Afghan capital Kabul?

Afghans Divided On When U.S. Troops Should Leave 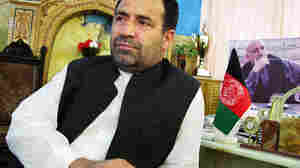 Afghan City May Be Test Case For U.S. Withdrawal

June 20, 2011 • Afghan security forces are preparing to take formal control of seven locations across the country. One of them is the capital of volatile Helmand province. Some residents are happy to see Afghan forces taking the lead, but they're also worried about what will happen when the American troops leave.

Afghan City May Be Test Case For U.S. Withdrawal

June 19, 2011 • The U.S. ambassador in Afghanistan, Karl Eikenberry, did something unusual. He publicly lashed out at Afghan President Hamid Karzai in a speech to students at Herat University.

U.N.: May Deadliest For Civilians In Afghan War

June 12, 2011 • As the summer fighting season begins, civilian deaths are outstripping military casualties in the country. The United Nations reported this weekend that May 2011 was the deadliest for civilians since the war began.

U.N.: May Deadliest For Civilians In Afghan War