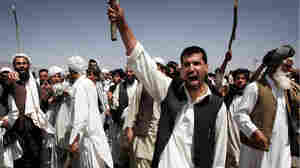 Villagers shout anti-U.S. slogans after a U.S.-led raid in Wardak, Afghanistan, that killed three civilians two weeks ago. A crowd of about 300 villagers yelled "Death to the United States" and blocked a main road in eastern Afghanistan. Rahmatullah Naikzad/AP hide caption

August 25, 2010 • In Wardak province, U.S. forces searching for a Taliban leader killed three men, who the Americans say engaged them with hostile intent. But the family and villagers say the young men were innocent students home for Ramadan. The incident provoked anger as many Afghans tend to blame the U.S., not insurgents, for their country's troubles. 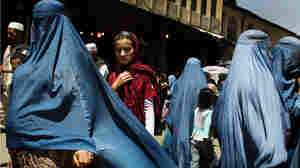 Women walk at an outdoor market in downtown Kabul. The resurgent Taliban and several recent executions in accordance with an extreme interpretation of Shariah law have human-rights activists worried, particularly for women. Rodrigo Abd/AP hide caption

August 20, 2010 • In one recent case, an Afghan widow suspected of adultery was tortured and shot. In another, a woman seeking to flee an abusive marriage had her nose cut off. Activists say the U.S.-supported government of Afghanistan has been passive on issues of human rights as it is eager to negotiate peace with the resurgent Taliban.

August 20, 2010 • Two U.S. Navy Special Forces trainers disappeared in Logar province and died in a Taliban ambush last month. Logar is close enough to the Afghan capital Kabul that you could end up there, if you made a wrong turn. Logar is considered almost completely under Taliban control. How did the insurgents manage to gain such a firm hold on Kabul's doorstep?

Kerry: Crucial For Karzai To Act Against Corruption

August 18, 2010 • Sen. John Kerry (D-MA) met Tuesday with Afghan President Karzai in Kabul. After Karzai won re-election last year, in what most considered a fraudulent election, relations with the U.S. were severely strained. It was a visit from Kerry that was credited with reviving ties. This time Kerry brought a different message: Patience is running out back home.

Kerry: Crucial For Karzai To Act Against Corruption 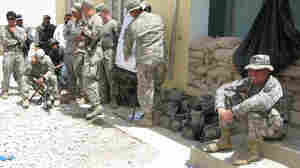 Hall rests during a recent patrol in Ali Abad, in northern Afghanistan, with a platoon of soldiers who live with the Afghan national police. Quil Lawrence/NPR hide caption

August 13, 2010 • As the U.S. counterinsurgency strategy is tested in Afghanistan, Army Command Sgt. Maj. Mike Hall reflects on his career and service in the war. Hall retired only to be called back into service in 2009 by Gen. Stanley McChrystal to help turn around the war effort. The general once called Hall "the finest soldier I have ever known."

August 10, 2010 • Izatullah Nusrat, 42, was held at the U.S. facility in Guantanamo for nearly five years. Now he is back in Afghanistan and running for election to Parliament in the Sept. 18 election. Nusrat has harsh words for Americans, but he favors working with the current government over the Taliban and says he wants the fighting to stop. 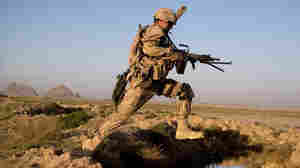 A Canadian soldier jumps over a ditch during a patrol in Afghanistan's Kandahar province in June. Canadian troops are expected to leave Afghanistan in 2011. Anja Niedringhaus/AP hide caption

August 9, 2010 • Amid the continuing violence in Afghanistan, the shape of the NATO alliance is changing. As troops from several countries depart, the number of U.S. forces continues to grow. They are finding new ways to work with the NATO counterparts that remain. 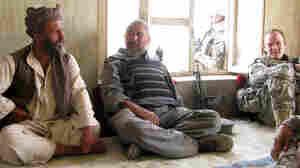 August 9, 2010 • U.S. troops are responding, deploying to the north and working with Afghan forces in areas previously thought to be free of Taliban influence. 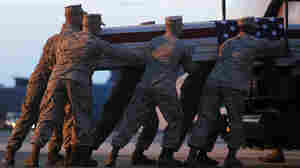 A Marine carry team lifts a transfer case containing the remains of Cpl. Paul J. Miller at Dover Air Force Base, Del., on July 21. Miller, of Traverse City, Mich., was killed by a roadside bomb blast while on patrol in Afghanistan. July was the deadliest month for U.S. troops in the nearly nine-year-old war. Steve Ruark/AP hide caption

August 2, 2010 • July was the deadliest month for American troops in Afghanistan since the U.S.-led invasion in 2001. The Pentagon has spent billions of dollars trying to protect troops from deadly roadside bombs, or IEDs. But insurgents respond to the new technology with new ways of making bombs.

July 28, 2010 • U.S.-led forces say they are taking the fight to the Taliban. The insurgents, meanwhile, have launched audacious attacks in the country. Both sides believe they are winning the war.

July 27, 2010 • In Afghanistan, the release of the Wikileaks documents has elicited a much different response than the angry denunciations coming out of Washington and Islamabad. The Afghan government seems to have no objection at all about the leaking of so much classified information.

July 26, 2010 • Afghan officials say the leaked documents corroborate what they've been saying for years: that Pakistan is destabilizing Afghanistan; that civilian casualties undermine support for the U.S.-led war effort and aid the Taliban; and that heat-seeking missiles in Taliban hands come from several countries, proving that this has become a regional war.

July 26, 2010 • U.S. and Afghan forces have expanded their manhunt for two U.S. naval personnel. The sailors departed their compound, traveled to a dangerous region of Afghanistan called Logar Province, and did not return. A Taliban spokesman says the two were ambushed — one killed, and one captured.

July 20, 2010 • More than 40 foreign ministers from around the world attended a donor's meeting in Afghanistan on Tuesday. The Kabul conference was a success by the most important measure set out by the organizers: There was no disruption by the insurgency that is raging in much of the countryside. U.S. Secretary of State Hillary Clinton and U.N. Secretary General Ban Ki-moon joined other delegations in demonstrating support for President Hamid Karzai. 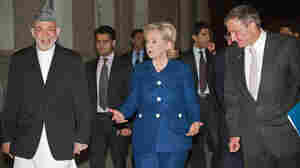 Secretary of State Hillary Clinton (right) is greeted by Afghanistan President Hamid Karzai in Kabul on Monday, a day ahead of the international donors' conference. Paul J. Richards/AP hide caption

July 19, 2010 • Secretary of State Hillary Clinton arrived in Kabul for an international donors' conference Tuesday. Afghan President Hamid Karzai, his administration plagued by allegations of corruption, will plead for more local control of the billions of dollars in aid. But war-weary Afghans wonder if the event will produce anything more than symbolism.