November 30, 2010 • The unauthorized release of some 250,000 diplomatic cables raises questions about how such sensitive information could be made public so easily. Apparently, a young Army soldier had access to the State Department documents and managed to download them. The Pentagon has instituted changes to protect its computer systems. 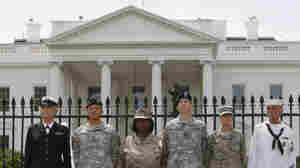 November 29, 2010 • Some of the questions the Pentagon will have to answer if the law barring openly gay troops is repealed: Will legal gay marriages be recognized in the military? If not, will gay partners get the same benefits as straight married couples? And do housing arrangements need to be changed?

November 26, 2010 • Over the next few weeks, the Obama administration will be completing a review of its war strategy in Afghanistan. The review will look at key measures of progress in the war -- for example: the effectiveness of operations against the Taliban and the readiness of Afghan troops to defend their own country. 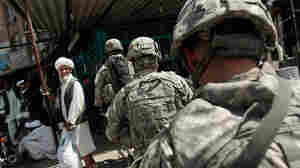 November 19, 2010 • At NATO's summit Friday and Saturday, leaders will map out a plan to start transitioning some provinces to Afghan control by early next year. Herat may be on the list, despite a recent uptick in violence. Its governor says that's possible, but the province isn't there yet. 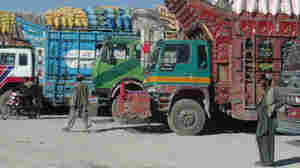 November 18, 2010 • U.S. troops have been conducting major combat operations in parts of Afghanistan's southeastern Kandahar province, and have managed to disrupt insurgent networks. But it's hard to know how many insurgents escape to Pakistan, lay low for a while and come back. 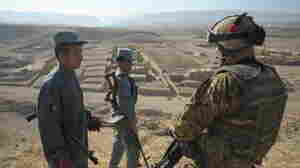 An Italian soldier (right) with Afghan army soldiers at  NATO's Combat Outpost Cavour in Bala Murghab. Here and in locations throughout the country, U.S., NATO and Afghan forces have retaken ground from the Taliban and are seeking to expand their areas of security control. Courtesy of Italian Army Maj. Igor Piani/ISAF hide caption

In Afghanistan, Can 'Security Bubbles' Last?

November 17, 2010 • U.S. and NATO forces are pursuing a strategy of winning small pieces of territory from the Taliban and seeking to expand these "security bubbles" village by village. As NATO faces a new 2014 deadline to wind down the war, the challenge is to turn these bubbles into something permanent.

November 3, 2010 • The latest terrorism plot to emerge from Yemen, shipping makeshift bombs on cargo planes, has raised all kinds of questions about what the U.S. military can do to counter the growing threat coming from this small Arab nation. What options -- and limits -- does the U.S. have for tracking down terrorists in Yemen? 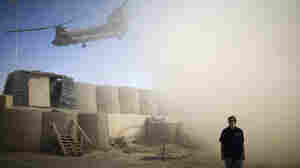 A U.S. contractor looks away from a dust cloud whipped up by a helicopter departing over the gatepost at Combat Outpost Terra Nova in Kandahar, Afghanistan. A recent government report states that billions of dollars are being spent on reconstruction in Afghanistan, but the money is not being tracked. Rodrigo Abd/AP hide caption

October 29, 2010 • The U.S. agency in charge of tracking reconstruction projects in Afghanistan has released its first major report. The conclusion: Billions of dollars have been spent, but the Pentagon and the State Department don't have a clear way to track the money.

October 21, 2010 • A federal appeals court ruling has cleared the way for the Pentagon to resume enforcing the policy that bars homosexuals from serving openly in the armed forces. The decision by a three-judge panel in San Francisco Wednesday temporarily blocks a lower court judge's injunction against enforcement of the military's "don't ask, don't tell" policy.

October 20, 2010 • CIA Director Leon Panetta says he will not fire or discipline any officials for failing to prevent the 2009 suicide bombing inside a base in Afghanistan that killed seven CIA employees. The blast was set off by a Jordanian double agent.

October 19, 2010 • A federal judge says she's inclined to deny a government request to delay her order that immediately stopped the military from enforcing its ban on openly gay service members. Military personnel want to know what the ruling would mean for them.

October 15, 2010 • After a week of legal maneuvers, it's not entirely clear whether the Pentagon's "don't ask, don't tell" policy is dead or alive. The law bars openly gay people from serving in the military. A federal judge this week issued an injunction barring the Pentagon from enforcing the law; the Justice Department has asked another court to reverse the injunction. Where does that leave things?

October 13, 2010 • The Pentagon has been ordered to stop enforcing its policy that bars gays from serving openly in the military. A federal judge in California issued the injunction in a case brought by the gay rights group Log Cabin Republicans. 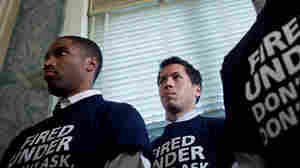 October 5, 2010 • Anthony Woods had two tours in Iraq under his belt, a Bronze Star Medal and a job offer at West Point. Then he outed himself to his commander, and everything changed. For Woods, being a closeted gay soldier under "don't ask, don't tell," was hard, but not being a soldier at all may be harder. 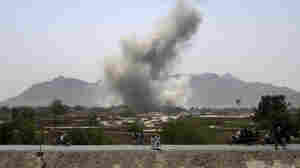 Smoke rises after NATO aircraft conduct an airstrike near the Arghandab River, south of Senjeray village, in Afghanistan's Kandahar province, where U.S. commanders had identified as insurgent positions, Sept. 11, 2010. As the U.S. cracks down on insurgents in Afghanistan, survivors flee to safe havens across the border in Pakistan. Now, the U.S. is ramping up strikes on Pakistan's lawless border region. Todd Pittman/AP hide caption

September 28, 2010 • As the U.S. military cracks down on insurgent groups in Afghanistan, survivors are fleeing to safe havens across the border in Pakistan, where they regroup. U.S. officials say winning the war will include ramping up drone strikes to destroy those sanctuaries.