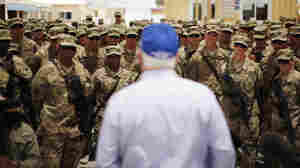 June 27, 2011 • Robert Gates has served under two administrations — the first to do so for different parties. He's known for speaking his mind when asked direct questions, and for letting troops know how their deployment weighs on him.

June 26, 2011 • River levels have just peaked in the city of Minot, N.D. Levels are now more than 6 feet above major flood stage. As many as 4,000 homes are flooded and more than 10,000 people remain evacuated from the city's center.

In NBA's Game 6: A Mythic Matchup

June 12, 2011 • Game 6 of the NBA Finals is about to tip off. Miami Heat's LeBron James and Dallas Maverick Dirk Nowitzki have achieved a drama of mythical proportions.

In NBA's Game 6: A Mythic Matchup

May 29, 2011 • President Obama visited the devastated area around Joplin, Mo., for the first time on Sunday. He said the nation will be with the devastated city "every step of the way." 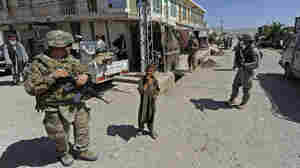 May 12, 2011 • The Obama administration plans to pull some troops out of Afghanistan in July. But administration officials say the overall strategy will remain as is — in part because it's still unclear what effect bin Laden's death is going to have on the insurgency.

May 7, 2011 • The Pentagon released five short videos on Saturday that were recovered from the Pakistani compound where Osama bin Laden had been living — and was killed. NPR's Rachel Martin tells host Guy Raz that the videos and other correspondence found at the compound in Abbottabad indicate that bin Laden was still a tactical leader for al-Qaida.

May 7, 2011 • Even before the Sept. 11 terrorist attacks, the CIA has had a special unit dedicated to tracking down Osama bin Laden. Now that the al-Qaida leader is dead, the missteps and milestones along the way are becoming chapters of a story that finally has an ending.

May 5, 2011 • President Obama has decided not to release the photos of Osama bin Laden taken after he was shot dead in Pakistan by U.S. forces. In an interview with CBS's 60 Minutes, Obama said bin Laden got the justice he deserved and there was no need to publish photographs to prove it.

A Look At How The Spies Found Bin Laden

May 2, 2011 • U.S. intelligence officials have been tracking Osama bin Laden for years. The trail went cold after the U.S. overthrow of the Taliban in 2001. But everything changed last year.

May 2, 2011 • Elite U.S. military forces launched a targeted operation against a compound in Abbottabad, Pakistan. In that raid, Osama bin Laden was killed. The compound had been under surveillance for some time.

Petraeus Slated To Take The Helm Of The CIA

April 28, 2011 • President Obama nominated Gen. David Petraeus to be the next head of the Central Intelligence Agency. Petraeus, the top commander in Afghanistan, will retire from the military to take the post at CIA.

Petraeus Slated To Take The Helm Of The CIA

April 22, 2011 • The war in Libya is "moving towards a stalemate," according to Admiral Mike Mullen, chairman of the Joint Chiefs of Staff.

April 20, 2011 • The CIA has announced it is declassifying the nation's six oldest secret documents. They date from 1917 and 1918 and describe secret writing techniques.

April 20, 2011 • Admiral Mike Mullen, the chairman of the Joint Chiefs of Staff, is in Pakistan and Afghanistan this week for talks with military officials there. The visit comes as U.S. officials try to lay the groundwork for peace talks aimed at bringing an end to the war in Afghanistan.