Accessibility links
Stefan Fatsis Stefan Fatsis began talking about "sports and the business of sports" with the hosts of All Things Considered in 1998. Since then he has been a familiar weekly voice on the games themselves and their financial, legal and social implications.

Headaches For FIFA: Injuries On Field And Hate In The Stands

June 20, 2014 • Sportswriter Stefan Fatsis joins Robert Siegel to discuss scrutiny that has recently befallen FIFA at the World Cup — both on and off the field.

Headaches For FIFA: Injuries On Field And Hate In The Stands

FIFA President On Qatar's World Cup: 'Of Course, It's An Error'

May 16, 2014 • The World Cup in Brazil starts in less than a month, but it's the World Cup eight years from now that's grabbing headlines. Sportswriter Stefan Fatsis discusses the doubts around Qatar's World Cup.

FIFA President On Qatar's World Cup: 'Of Course, It's An Error'

May 2, 2014 • The saga of Donald Sterling is looming large over the opening weeks of the NBA playoffs. Even as the league moves to strip Sterling's ownership, Clippers players still have games to win on the court.

March 7, 2014 • The Philadelphia 76ers have lost their last 15 games. As sportswriter Stefan Fatsis notes, the team's losing streak has raised a question: Are some NBA teams trying to lose to get a better draft pick?

February 14, 2014 • Sportswriter Stefan Fatsis talks to host Robert Siegel about the latest developments in the Dolphins bullying investigation. Carried out by attorney Ted Wells on behalf of the National Football League, the investigation found a "pattern of harassment" on the team, including texts and voicemail abuse targeting Jonathan Martin.

In NFL Playoffs, Excitement Does Little To Dim Injury Concerns

January 10, 2014 • Playoffs in the National Football League enter the divisional round with eight teams still vying to play for the Super Bowl. Sportswriter Stefan Fatsis speaks to Audie Cornish about the dominant storylines of the weekend, including quarterback matchups and an unsettling upward trend in injuries.

In NFL Playoffs, Excitement Does Little To Dim Injury Concerns

August 12, 2011 • The U.S. men's soccer team tied archrival Mexico in an exhibition game this week that's getting a lot of attention. It was the debut of the U.S. team's new coach, Jurgen Klinsmann, a former star of the German national team who's raising hopes for the future of soccer in America.

July 7, 2010 • If you want to focus on Arjen Robben’s flops or Diego Forlan’s locks, it’s a bad idea to ponder the business of the World Cup. Stefan Fatsis of The New Republic compares the corruption of the IOC with that of FIFA.

Just Not The Right Time For U.S. Team

June 26, 2010 • When the U.S. makes it, I want the world to truly respect its play, not call advancement a fluke of matchups. But part of me -- the deeply American part -- wanted to win now.

U.S. Vs. Ghana: Enough With The Do-Or-Die Stories

June 25, 2010 • The Ghana Vs. U.S. match is going to be a great one, but sports writer Stefan Fatsis says the future of American soccer does NOT rest on this one game. 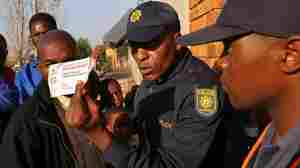 A policeman shows a ticket to a  fan trying to enter a Brazilian training session on June 3. John Moore/Getty hide caption

Sometimes, The Only Choice Is A Tense, Nervous Deal With A Scalper

June 15, 2010 • When a FIFA.com error makes buying tickets impossible, a reluctant deal must be made. 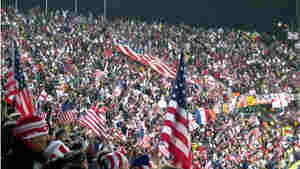 Although outnumbered by English banners, American flags were proudly on display at the stadium in Rustenburg. Stefan Fatsis hide caption

June 14, 2010 • How far has the U.S. advanced as a soccer nation? The men's national team has multiple fan clubs. There’s even a little trash-talking going on.

June 12, 2010 • The vuvuzelas are the happy soundtrack of South African soccer. They're about joy, and the main emotion I felt today is that South Africans seem downright thrilled to be hosting the event. 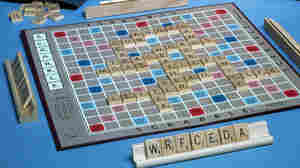 Settling The Word Score: No Proper Nouns In Scrabble

April 7, 2010 • Calm down, Scrabble purists. Turns out rumors about allowing proper nouns in the beloved board game were just rumors. Scrabble expert Stefan Fatsis says the rules have remained virtually unchanged since the game was first marketed in 1948 — and after 62 years of consistency, no one can mess with the game that easily.