March 29, 2019 • The Trump administration is warning of "fake families" and fraudulent documents amid the surge of families at the U.S.-Mexico border.

Migrants trudge along the border fence to a waiting bus after turning themselves in to the Border Patrol at the U.S.-Mexico border near El Paso, Texas. John Burnett/NPR hide caption

March 26, 2019 • The Border Patrol is bringing in more agents and asking the Pentagon for help as thousands of migrants continue to cross the U.S.-Mexico border each day.

March 25, 2019 • El Paso is the new illegal crossing hot spot on the southern border. Officials say they have run out of room to process migrants, and they're encountering more and more infectious diseases. 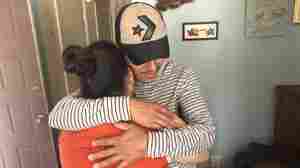 Jose Eduardo hugs his 15-year-old daughter Yaimy, 10 months after they were separated at the U.S. border. John Burnett/NPR hide caption

March 14, 2019 • Jose Eduardo was separated from his daughter Yaimy after crossing the U.S.-Mexico border last spring. He was deported, but his daughter remained in U.S. custody. Now, he has returned to find her. 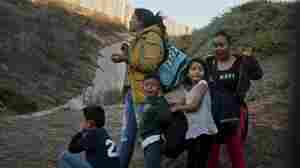 Honduran migrants surrender to the U.S. Border Patrol after crossing a border wall into the United States. According to new federal data, the number of migrants apprehended crossing the border in recent months has surged. Ramon Espinosa/AP hide caption

March 5, 2019 • The system is "overwhelmed," says Manuel Padilla, director of Joint Task Force-West. The migrants apprehended at the Southern border in February made for the highest monthly total in almost a decade.

March 5, 2019 • Agents apprehended some 60,000 people last month — about 12,000 more immigrants than they picked up in January. The majority arrested are families, and children traveling alone or without a parent. 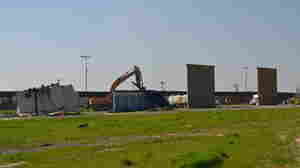 In 2017 the Trump Administration put up eight border wall prototypes to demonstrate the "next generation" of border barriers. On Wednesday, all but one were demolished. Max Rivlin-Nadler for NPR hide caption

February 27, 2019 • Eight steel-and-concrete mock-ups of border wall prototypes were put up near the San Diego-Tijuana border in 2017. They were supposed to represent the "next generation" of border barriers.

February 27, 2019 • Thousands of unaccompanied migrant children have reported being sexually abused while in U.S. government custody. The numbers were detailed in documents released by a Democratic congressman. 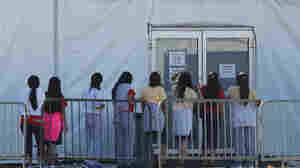 Children line up to enter a tent at the Homestead Temporary Shelter for Unaccompanied Children. Once youth turn 18, they are aged out of the children's shelter and are at risk of being placed in an adult detention facility. Wilfredo Lee/AP hide caption

February 22, 2019 • In two-thirds of over 1,500 cases from April 2016 to February 2018, Immigration and Customs Enforcement put migrant youth into detention when they turned 18, according to government data.

Nearly 1,600 teenage migrants are housed at a temporary emergency shelter in Florida run by a for-profit company. U.S. Department of Health and Human Services hide caption

Inside The Largest And Most Controversial Shelter For Migrant Children In The U.S.

February 13, 2019 • A temporary shelter has been contracted south of Miami to house more than 2,000 migrant children. It is the nation's only corporate, for-profit migrant youth shelter.

Florida Shelter Is Scrutinized For The Way It Handles Migrant Children

February 13, 2019 • Hundreds of migrant children are housed at a South Florida shelter, which is under scrutiny because it's the only one to be run by a for-profit corporation and is not overseen by state regulators.

Florida Shelter Is Scrutinized For The Way It Handles Migrant Children 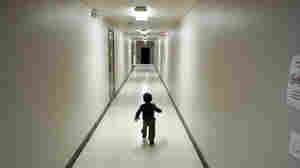 An asylum-seeking boy from Central America runs down a hallway in December after arriving at a shelter in San Diego. Immigrant advocates say they are suing the U.S. government for allegedly detaining immigrant children too long and improperly refusing to release them to relatives. Gregory Bull/AP hide caption

January 24, 2019 • Over 10,000 immigrant children are in U.S. custody. In the past year, lawyers say at least 170 willing sponsors were arrested and put in deportation proceedings after coming forward for the child.

January 23, 2019 • The Trump administration is using a system that is meant to help migrant children to deport the kids and their families, according to several lawsuits filed around the country.

January 19, 2019 • President Trump proposed a deal to congressional Democrats that would protect recipients of the Deferred Action for Childhood Arrivals program in exchange for $5.7 billion to fund the border wall.

January 17, 2019 • Before family separation became an official and controversial policy of the Trump administration, federal immigration agents separated "thousands" of migrant children from their parents.