Part Of The Landscape For Decades, Pumpjacks Remain Essential In Shale Fields

June 28, 2015 • From south Texas to North Dakota, pumpjacks are a symbol of life in American oil fields. This story originally aired on All Things Considered on April 15, 2015.

Part Of The Landscape For Decades, Pumpjacks Remain Essential In Shale Fields

June 19, 2015 • Rev. Clementa Pinckney was devoted to public service. He was a state senator and champion of civil rights. Those who knew him say he was a natural leader, whether in politics or in the church.

June 8, 2015 • Residents are still fighting Chinese manufacturers who sold bad drywall that went into the post-Katrina rebuilding effort. On Tuesday their case picks up again in a New Orleans federal courtroom. 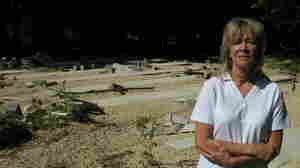 Kelly O'Keefe is usually volunteering to help others. Now she's accepting help from strangers after her home was destroyed by floods. "It's really difficult to be the one with my hand out," she says. John Burnett/NPR hide caption

June 6, 2015 • Search crews continue to look for three missing people after the Memorial Day weekend flood on the Blanco River. Meanwhile, those in Wimberley, Texas, are struggling to put their lives back together.

June 2, 2015 • Bail for bikers arrested in last month's Waco, Texas, mass shooting has been dramatically lowered from the original $1 million to at least $25,000. Some families say the bikers were unfairly arrested.

May 27, 2015 • As the storms lumber eastward, they broke extreme weather records in northern Mexico, Texas and Oklahoma. Dozens of people have been killed in flooding, tornadoes or are missing.

May 26, 2015 • The 5th U.S. Circuit Court of Appeals ruled Tuesday against a request by the Obama Administration to resume applications for temporary deportation relief for an estimated 4.7 million immigrants. 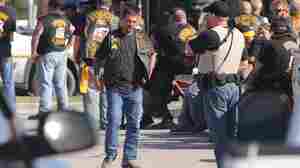 Authorities investigate a shooting in the parking lot of the Twin Peaks restaurant Sunday in Waco, Texas. Bikers say that most of the 170 people arrested had nothing to do with the violence. Jerry Larson/AP hide caption

May 23, 2015 • Bikers claim that many who were arrested in the Waco, Texas, brawl last week were simply in the wrong place at the wrong time. But police say the bikers were "known criminal gang members."

May 18, 2015 • Police have jailed around 170 members of rival biker gangs since Sunday's deadly gunfight outside a sports bar. Nine people were killed and dozens were injured in the fight. 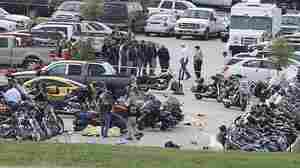 Authorities investigate a shooting in the parking lot of the Twin Peaks restaurant Sunday in Waco, Texas. Authorities say the shootout victims were members of rival biker gangs that had gathered for a meeting. Jerry Larson/AP hide caption

May 18, 2015 • Bystanders fled for safety during the shootout at a busy restaurant in Waco shortly after noon on Sunday. The number of injured is unknown. 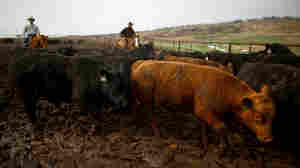 Donnell Brown and another cowboy move a grouping of bulls from one pen to another on rib-eye ultrasound day in March at the R.A Brown Ranch. David Gilkey/NPR hide caption

April 23, 2015 • The rib-eye is the bestselling cut of beef in America both at the supermarket and the steakhouse. Once a year, breeders bring their stock into the barn to take a peek at the steak using ultrasound.

April 15, 2015 • Pumpjacks have been part of the American landscape for decades, and they remain essential in today's shale fields. 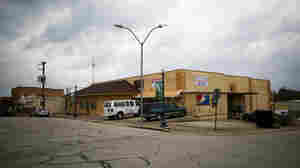 April 12, 2015 • The first steps of freedom from the prison in Huntsville, Texas, lead to the nearby Greyhound bus station.

April 2, 2015 • Battles between rival drug gangs are flaring in the northeastern Mexican city of Matamoros. Kidnapping is increasingly being used by the narco-traffickers as an income generator.