April 21, 2011 • Clay W. Hunt, 28, a decorated combat veteran in both Iraq and Afghanistan and an advocate for combat troops suffering from depression and post-traumatic stress disorder, killed himself in his apartment outside Houston last month.

April 13, 2011 • Texas already has the highest speed limit in the nation: 80 mph. And now, the state House of Representatives has voted to increase the limit to 85 mph.

April 5, 2011 • The Federal Aviation Administration is ordering all airlines to inspect the fuselages of older 737 aircraft for cracks after the skin of a Southwest Airlines jet ruptured Friday, forcing an emergency landing in Arizona. Already Southwest has found cracks in three more 737-300s, raising concerns about the airworthiness of the Boeing planes. 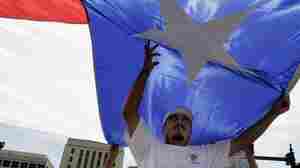 In 2006, Houston was among many cities participating in the nationwide National Day of Action for Immigration Justice rallies. When George W. Bush was governor, he adopted a Hispanic-friendly strategy that helped propel him to the White House. Now, some Texas Republicans are taking a harder stance. "I believe the Republican Party is throwing away their future," says one state Republican. Dave Einsel/Getty Images hide caption

March 29, 2011 • The relatively welcoming, tolerant attitude embraced by former Gov. George W. Bush is being overtaken by a flood of Arizona-style get-tough measures. And while legal challenges will surely follow if many of those measures pass, the debate in Texas is clearly shifting.

March 7, 2011 • In Texas, Tea Party activists are suing to change the way census figures are used to draw congressional districts. They say by including illegal immigrants in the count, the government is diluting the political power of citizens who live in districts without large illegal immigrant populations.

February 17, 2011 • In Austin, Texas, late iconic political columnist Molly Ivins is the subject of a new play. Red-Hot Patriot: The Kick-Ass Wit of Molly Ivins is giving her fans — and her foes — a reminder of her fiery style. 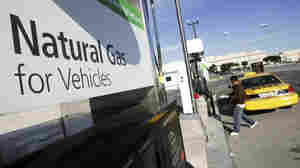 February 3, 2011 • Independent cab drivers are protesting a new city policy that allows natural gas cab drivers to cut in front of regular gas cab drivers at Dallas' city-owned airport. Regular gas cabbies say they can't afford to convert their cabs, and argue the policy has cut their pay in half. The protests continue as the Super Bowl comes to town.

Inside Loughner's Mind: What His Writings Reveal

January 23, 2011 • Two weeks after the tragic shooting in Tucson, little is known about the gunman's motives or state of mind. NPR's Wade Goodwyn explores the different views people have about the shooting, the alleged gunman and the debate the incident has sparked.

Inside Loughner's Mind: What His Writings Reveal 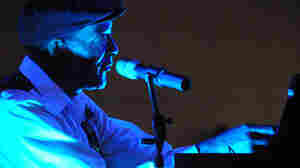 January 15, 2011 • Before the Civil War, the town of Marshall was a center of Texas' plantation economy. It's now trying to reinvent itself as a tourist destination for weekenders from Dallas and Houston. And it's reaching into its past to grab on to an almost forgotten musical legacy: boogie woogie piano. 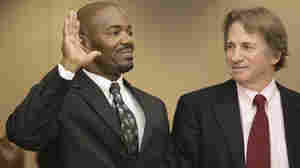 Cornelius Dupree Jr. raises his hand to testify Tuesday while attorney Barry Scheck looks on. Dupree served 30 years in connection with a rape and robbery before being exonerated by DNA evidence. Mike Fuentes/AP hide caption

January 4, 2011 • Cornelius Dupree Jr. is the 21st prisoner from Dallas to march out of the state prison system. Dallas has so many exonerations not because it was more egregiously unjust than other counties in the state, but because it kept the DNA evidence refrigerated and stored for decades.

Temporary Work For The Holiday Season

December 24, 2010 • With more than 15 million Americans still unemployed, companies have had little trouble finding temporary workers for the holiday season. In fact, hiring temps is becoming more and more common in all workplaces, all year round. Today, we get to know a few of those temps who are helping make our holidays brighter. First, NPR's Wendy Kaufman sets out to find those real-life elves who ship Christmas presents; WSHU's Craig Lemoult visits Nodine's Smokehouse in Torrington, Conn., where workers are smoking hams, bacon, duck, venison and beef jerky; and NPR's Wade Goodwyn visits the Lionel train exhibition in Dallas.

Temporary Work For The Holiday Season

December 20, 2010 • Congress recently voted to fund the multi-billion dollar settlement involving the Department of Agriculture and black and Native American farmers. The farmers claimed rampant and systematic discrimination in the awarding of USDA loans. Hispanic farmers have made similar claims, but won't see nearly as much money.

December 13, 2010 • In two election cycles, the balance of power in the politically conservative city shifted to Democrats, and politicians once on the margins are now shaping the future. That includes County Commissioner John Wiley Price.

The Sidewalks Of Clarksville, Texas

November 23, 2010 • Wade Goodwyn reflects on an interview with two brothers on the sidewalk behind their former high school in Clarksville, Texas, and the lasting legacy of racial tension in East Texas.

November 23, 2010 • A Texas state judge refused to back away from a drug case even after the local prosecutor and the state attorney general's office agreed to drop charges. Almost three years later, a now-fired high school basketball coach and his brother have watched their lives fall apart.