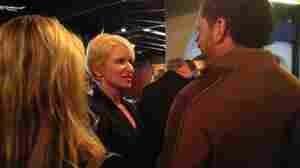 August 28, 2015 • Dallas District Attorney Susan Hawk announced she is being treated for depression after three weeks of questions over her whereabouts. Her staff had said she was on a long vacation. 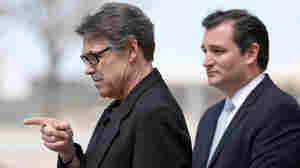 August 12, 2015 • Not even Texas is solidly behind former Gov. Rick Perry this year. Sen. Ted Cruz and other presidential candidates are successfully drilling in Texas for gushers of campaign contributions.

One Of The Nation's Biggest Urban Forests Isn't Where You'd Expect

August 6, 2015 • Running all the way through Dallas is a 6,000-acre stretch of massive oaks, bubbling springs and broad meadows. But the river running through it has many of the issues faced by other urban waterways.

One Of The Nation's Biggest Urban Forests Isn't Where You'd Expect

Boy Scouts To Announce End Of Ban On Gay Leaders

July 27, 2015 • The Boy Scouts are expected to end the ban on gay leaders and volunteers Monday. It will still allow troops affiliated with religious groups to deny leadership roles based on sexual orientation.

Boy Scouts To Announce End Of Ban On Gay Leaders

July 20, 2015 • Officials in Texas are making it more difficult for undocumented immigrants to get birth certificates for their children born in the state. The state tightened ID requirements for parents, prompting a number of lawsuits. 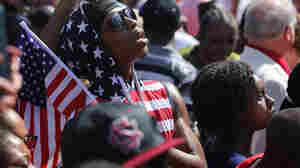 July 11, 2015 • When NPR's Wade Goodwyn was a boy, his father was involved in the civil rights movement in Texas. There, he got an early lesson in the ugly reality of racism from his next door neighbor. 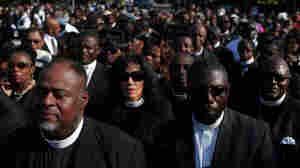 Charleston's Black Leaders Want To See Justice As Much As Forgiveness

Charleston's Black Leaders Want To See Justice As Much As Forgiveness

June 26, 2015 • President Obama delivered the eulogy Friday at the funeral of Rev. Pinckney in Charleston, S.C., Friday. The state senator was killed last Wednesday in the shooting at a historic black church.

June 25, 2015 • Funerals are being held in North Charleston, S.C, Thursday for two of the nine victims slain in last week's massacre at a historic black church, allegedly by an avowed white supremacist. 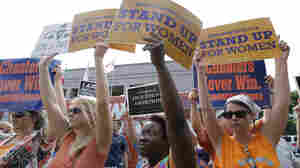 On July 9, 2013, opponents and supporters of a bill to put restrictions on abortion hold signs near a news conference outside the Texas Capitol in Austin. The bill was passed, but has been battled in the courts for two years; now, the law is set to go into effect July 1. Eric Gay/AP hide caption

June 24, 2015 • A controversial 2013 law, which will likely leave just nine clinics open in the state, is set to go into effect July 1. Abortion-rights supporters have asked the U.S. Supreme Court to intervene.

June 4, 2015 • Former Texas Gov. Rick Perry officially joined the race for the Republican Presidential nomination Thursday. In a speech at an aircraft hangar outside Dallas, Perry highlighted his military service and his executive experience in Texas. 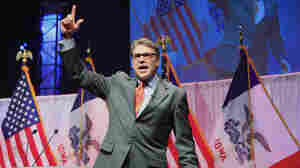 June 4, 2015 • The former Texas governor is running again for the GOP presidential nomination. Did you know that he was once an Al Gore Democrat, he and George W. Bush have bad blood and he used to be a cheerleader? 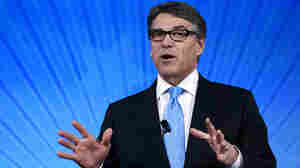 May 29, 2015 • Texas has turned down federal funds to expand Medicaid under the Affordable Care Act. Hospitals and some business owners want the money, but it's a tough sell in Republican-dominated state politics.

Texas Loses Billions To Treat The Poor By Not Expanding Medicaid, Advocates Say

May 29, 2015 • When the Supreme Court ruled that the federal government could not compel states to expand Medicaid programs, many Southern and Midwestern states opted out. One quarter of the uninsured live in Texas.

Texas Loses Billions To Treat The Poor By Not Expanding Medicaid, Advocates Say

May 20, 2015 • Legislation was signed by Republican Gov. Greg Abbott after the city of Denton voted to restrict fracking. Denton officials say oil companies should not wield more power than citizens.