October 26, 2012 • The San Francisco Giants are halfway to a World Series title. On Thursday night, the Giants beat the Detroit Tigers 2-0, giving San Francisco a two-games lead as the best of seven series now shifts back to Detroit.

October 25, 2012 • The San Francisco Giants hosted the Detroit Tigers in Game 1 of the World Series on Wednesday night. The well-rested Tigers couldn't stop the Giants, who were riding their momentum from a thrilling Game 7 playoff victory. The Giants won, 8-3.

October 24, 2012 • The Detroit Tigers play the San Francisco Giants in the World Series, which begins Wednesday.

October 22, 2012 • Cycling's governing body Monday stripped Lance Armstrong of his Tour de France titles and banned him for life. "Lance Armstrong has no place in cycling," said Pat McQuaid, the president of the cycling union. Armstrong's name will be erased from the record books and he might also be stripped of his bronze medal from the 2000 Sydney Olympics.

October 22, 2012 • The International Cycling Union has agreed to strip Lance Armstrong of his 7 Tour de France titles and ban him for life. Cycling's governing body said its federation accepts the U.S. Anti-Doping Agency's report on Armstrong and would not appeal to the Court of Arbitration for Sport. 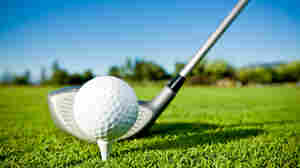 In speed golf, players run between holes carrying their clubs and often finish an 18-hole round in less than an hour. iStockphoto hide caption

October 21, 2012 • This weekend Oregon hosts the nation's top golfers, but their names may not be familiar. These players compete in speed golf, a relatively new game that lives up to its name. Golfers can putt and drive their way through 18 holes in about two hours, what would be considered a blistering pace for regular course play.

October 18, 2012 • Armstrong announced Wednesday that he will no longer be chairing Livestrong, the foundation he started to support fellow cancer survivors. And, he lost major sponsors, including Nike, Anheuser-Busch and Radio Shack. All this follows last week's searing report by the U.S. Anti Doping Agency. It placed Armstrong at the center of a sophisticated doping program on his championship cycling teams.

October 17, 2012 • Lance Armstrong is stepping down from his role as Chairman at his cancer-fighting foundation, Livestrong. He's also been dropped by Nike, which ended its relationship with him on Wednesday.

October 16, 2012 • The Detroit Tigers have a chance to put the reeling New York Yankees on the brink of elimination. Meanwhile, the San Francisco Giants have slowed the St. Louis Cardinals, who'd been playing with the kind of magic touch that carried them to last year's World Series title. 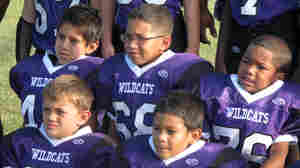 The Angleton Wildcats pose for picture day. The team of 7- and 8-year-olds is from the south Texas town of Angleton. Tom Goldman/NPR hide caption

October 15, 2012 • Parents of young players are increasingly anxious about concussions. Many continue to participate — albeit more cautiously. Others worry about whether the youth leagues will eventually halt altogether. In Texas, the risk of injury is putting families at odds with a sport many consider a religion.

October 11, 2012 • The United States Anti Doping Agency has released its report on Lance Armstrong. It outlines the evidence the agency used to strip Armstrong of his Tour de France titles and banned him from cycling.

October 4, 2012 • The regular season ended Wednesday night, and that's when Miguel Cabrera became the 15th player to win baseball's Triple Crown. For the first time, there will be a one-game Wild Card playoff on Friday.

October 1, 2012 • Martin Kaymer delivered the crucial point with a 1-up victory over Steve Stricker on Sunday, and Tiger Woods missed from inside four feet to halve his match with Francesco Molinari. The Europeans finished with 14 1/2 points while the Americans had 13 1/2.

NFL, Refs Meet But There's No End To Labor Dispute

September 26, 2012 • Patience is running thin for many after the latest blown call by replacement referees in the National Football League. It's even seeped into national politics. Will a long-term strike have long-term implications for the game?

NFL, Refs Meet But There's No End To Labor Dispute

Calls Grow For NFL To Settle Dispute With Refs

September 25, 2012 • Replacement referees have been officiating the games since the National Football League locked out officials. The outcome of Monday night's game between the Green Bay Packers and the Seattle Seahawk's is prompting new calls for the lockout to end.

Calls Grow For NFL To Settle Dispute With Refs