December 29, 2014 • A California measure will limit the amount of full contact middle and high school football players can have during practice. The new law takes effect January 1.

December 22, 2014 • Florida State says quarterback Jameis Winston did not violate any school code of conduct in an alleged sexual assault case. This allows Winston to go on playing football for the undefeated Seminoles.

December 8, 2014 • Ohio State's romp in the Big Ten championship game propelled the Buckeyes past TCU and Baylor in the eyes of the college football playoffs selection committee.

December 1, 2014 • Was the New England Patriots-Green Bay Packers game a Super Bowl preview? Does the putrid NFC South really deserve a spot in the playoffs, or can they give it to the SEC? 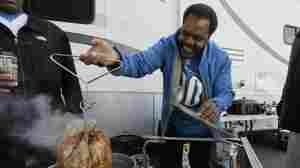 November 18, 2014 • The NFL says Minnesota Vikings star running back Adrian Peterson will be suspended, without pay for the rest of the 2014 season. Peterson pleaded no contest to a felony charge after he injured his 4-year-old son while whipping him with a switch. The players union says it will appeal the decision.

October 29, 2014 • The Kansas City Royals beat the San Francisco Giants 10-0 in Game 6 of the World Series, pushing the battle on to Wednesday for the final game. David Greene gets the news from NPR's Tom Goldman.

October 28, 2014 • The San Francisco Giants need one more win over the Kansas City Royals to clinch their third World Series championship in the past five years. Sounds simple, but history says otherwise.

October 22, 2014 • Ever since the giant Shuttlecocks art exhibit was installed in the 1990s, Kansas City professional sports teams haven't been able to win a national championship. And there are some who believe the exhibit is to blame.

October 21, 2014 • Game one of the World Series begins tonight between the San Francisco Giants and the Kansas City Royals. Relief pitching and scrappy play by both teams are expected to make the series close.

October 21, 2014 • Game One of the World Series is Tuesday night between the Kansas City Royals and the San Francisco Giants. The Giants are playing in their third World Series in the last five years, and it's the first for the Royals since 1985. Steve Inskeep gets a preview from NPR's Tom Goldman.

October 17, 2014 • The San Francisco Giants beat the St. Louis Cardinals 6-3 Thursday to advance to the championship. The day before, the Kansas City Royals defeated the Baltimore Orioles to win their series slot.