February 24, 2014 • Jason Collins signed with the NBA's Brooklyn Nets on Sunday. With the deal, he becomes, not only the NBA's first gay player, but the first openly gay athlete active in U.S. major professional sports.

NBA Teams Take A Break For The All-Star Game

February 14, 2014 • The NBA is approaching mid-season. We catch up on how teams are doing and which players stand out. The annual All-Star game is on Sunday.

NBA Teams Take A Break For The All-Star Game 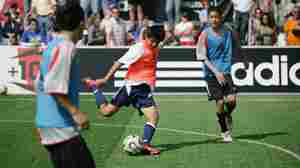 January 30, 2014 • Throughout the West, bone dry conditions are exacting a toll on places that rely on water to thrive. In southern Oregon, recreation plays an important role in the region's economy. The ongoing drought is drying up streams where fishing once was plentiful and it's left ski resorts wanting for snow. 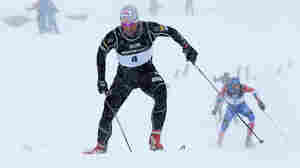 Kris Freeman, skiiing here for the U.S. team in 2011, during the Winter Games NZ, was cut from the U.S. Ski team before the upcoming Sochi Olympic Games. Freeman has had to train without their support and still hopes to qualify to compete in Russia. Hannah Johnston/Getty Images hide caption

January 20, 2014 • Three-time Olympic skier Kris Freeman has had a successful career filled with challenges; first and foremost managing diabetes while becoming an elite competitor in a physically taxing sport. But this past year, Freeman encountered another obstacle when his relationship with the national ski team abruptly ended.

January 7, 2014 • No. 1 Florida State defeated No. 2 Auburn 34-31 in Monday night's final BCS Championship game at the Rose Bowl in Pasadena, Calif. There will be a playoff system next year.

Many Fans Not Sad To See End Of Bowl Championship Series

January 6, 2014 • On Monday night, Florida State and Auburn battle for the national college football title. It will be the last championship under the much maligned Bowl Championship Series, or BCS. A new playoff system kicks off next season, but will it be better?

Many Fans Not Sad To See End Of Bowl Championship Series

January 6, 2014 • College football's champion will be decided Monday night at the Rose Bowl. No. 1 Florida State plays No. 2 Auburn in the last Bowl Championship Series game. It will be replaced next year with a playoff.

Kiwi Gardner Gets A Break, Told To 'Go At The Rim'

December 31, 2013 • Two months ago, NPR listeners were introduced to Kiwi Gardner, 20, a 5'7" basketball wiz from Oakland, Calif. Like so many talented young ballplayers, Gardner's ultimate goal is the NBA but he has took take the minor league route.

Kiwi Gardner Gets A Break, Told To 'Go At The Rim'

December 27, 2013 • With the NBA season a third of the way through, the Portland Trailblazers are having a very good year. But they'll be tested when they meet defending champions the Miami Heat on Saturday. 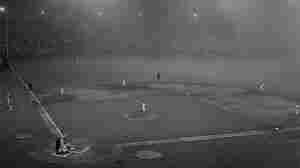 A low, wet fog swirled across the field at Candlestick Park in San Francisco as the Giants opened a three-game series against the Cincinnati Reds on Aug. 31, 1962. AP hide caption

December 23, 2013 • Monday is the last game at Candlestick Park for the San Francisco 49ers. The NFL team is moving, and the park, famous for its windy and foggy weather, is being demolished after this football season. It leaves behind more than 50 years of memories. 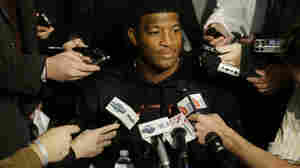 December 14, 2013 • No charges were filed against Florida State quarterback Jameis Winston, but the accuser's lawyer is calling for an independent review of the state's investigation. She says investigators focused on the accuser more than the alleged perpetrator.

December 6, 2013 • Florida State University quarterback Jameis Winston, considered a Heisman Trophy front-runner, has been facing allegations that he assaulted a female FSU student in December 2012, prior to his college career. Winston's attorney has contended that his client had consensual sex with the woman.

December 5, 2013 • Florida State Quarterback Jameis Winston will not be charged in connection with an alleged sexual assault. That decision was announced Thursday in Talahassee.

College Football Winds Down Ahead Of Final BCS Championship

November 29, 2013 • It's rivalry week in college football. And this weekend, there's some extra spice as games from Alabama to Florida to Michigan could have an impact on which two teams end up playing for the national championship.

College Football Winds Down Ahead Of Final BCS Championship