April 29, 2015 • Floyd Mayweather is expected to beat Manny Pacquiao in their much anticipated fight this Saturday in Las Vegas, but many are rooting for him to lose. He is one of boxing's most polarizing figures.

April 17, 2015 • With the NBA playoffs about to begin, the Golden State Warriors have the best record in the league and the most exciting playing style — highlighted by Stephen Curry's long-range shooting.

Duke Comes From Behind To Defeat Wisconsin In Men's NCAA Championship

Duke Comes From Behind To Defeat Wisconsin In Men's NCAA Championship 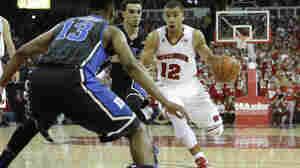 Traevon Jackson of the Wisconsin Badgers drives to the hoop during a game against the Duke Blue Devils on December 03, 2014. They will face one another again in the NCAA championship game Monday. Mike McGinnis/Getty Images hide caption

April 6, 2015 • Men's and women's college basketball seasons are over except for the championships. Wisconsin plays Duke Monday for the men's title, and UConn and Notre Dame play Tuesday for the women's title.

Wisconsin's Dramatic Defeat Of Kentucky Is A Case Of Role Reversal

April 5, 2015 • The Kentucky Wildcats will not finish the college basketball season undefeated. Last night at the final four event, Wisconsin beat Kentucky in a dramatic showdown between number-one seeds.

Wisconsin's Dramatic Defeat Of Kentucky Is A Case Of Role Reversal

Undefeated Kentucky Vies For Perfection As It Enters Final Four

Undefeated Kentucky Vies For Perfection As It Enters Final Four

April 3, 2015 • On Saturday, the Kentucky Wildcats take on the Wisconsin Badgers and the Michigan State Spartans play Duke's Blue Devils. The winners will play Monday for the NCAA men's basketball championship.

March 20, 2015 • March Madness began in earnest Thursday with 16 games, and there were buzzer-beaters and big upsets — two No. 3 seeds went down. But overall No. 1 seed Kentucky won easily as did another top seed, Villanova.

March 18, 2015 • In this first round of the tournament, smaller schools are vying for advancement to more competitive rounds.

In NCAA Women's Bracket, UConn Is Easily The Top Seed

March 17, 2015 • The NCAA has selected the teams for the women's basketball championships and, no surprise, UConn is the No. 1 seed. Some say all the other contenders are just playing for second place.

In NCAA Women's Bracket, UConn Is Easily The Top Seed

Start The Madness: Weighing The Seeds Of March

March 16, 2015 • Millions are preparing to fill out their NCAA tournament brackets, pondering deep questions such as, "Can Kentucky really run the table?" and "Which No. 5 seed will beat a No. 12 in the first round?"

Start The Madness: Weighing The Seeds Of March

March 12, 2015 • There was fear in the boxing world that this generation's two best fighters would retire before facing each other in the ring. But the Floyd Mayweather, Jr. and Manny Pacquiao fight is on for May 2.

March 6, 2015 • Boxing's hold on American sports fans has waned over the years, but there's a movement to recapture mass interest. Hoping to capitalize on buzz from the upcoming super bout between Manny Pacquiao and Floyd Mayweather on May 2, NBC is launching bouts to be broadcast on Saturdays.