May 29, 2017 • Frank Deford, NPR's longtime sports commentator, has died at age 78. The Hall of Fame sportswriter was a mainstay on Morning Edition for some 37 years until his retirement earlier this year.

May 27, 2017 • It's the Cleveland Cavaliers and the Golden State Warriors once again at the NBA Finals. And what to look for in the final hours of the French Open.

May 24, 2017 • The NFL announced on Tuesday it is relaxing its rules on celebrations in the end zone after big plays. Previously, the league limited how players could celebrate after touchdowns and for how long.

May 17, 2017 • An injury to a star player following an aggressive defensive play has changed the tenor of the NBA playoffs. An uproar has ensued over whether the move was intentional and whether the league should tighten its rules.

May 13, 2017 • NBA fans are disappointed in this year's playoffs, due to the lack of close games and the utter dominance of the Golden State Warriors and Cleveland Cavaliers.

May 12, 2017 • Los Angeles hopes to beat out Paris for the 2024 Olympics bid. Members the International Olympic Committee will decide the winner later this year. But soaring financial costs may offer some surprises.

Fenway Incidents Prompt Questions About Hate Speech At The Ballpark

May 11, 2017 • Last week at Boston's Fenway Park, fans openly used racial slurs, and in one case they were directed at Baltimore Orioles outfielder Adam Jones. NPR explores if the incidents are isolated or part of a larger problem.

Fenway Incidents Prompt Questions About Hate Speech At The Ballpark 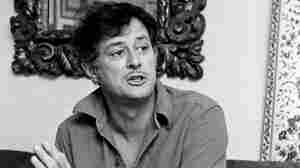 May 5, 2017 • The long-time sports commentator announced his retirement from NPR this week. His success was often measured by just how much the audience loved, or hated, what he had to say.

April 15, 2017 • NBA playoffs are underway with Cleveland and Golden State as the mainstream favorites to win; and in the world of hockey, the Washington Capitals look poised to win their first championship.

April 14, 2017 • One of the NFL's most popular and influential executives has died. Dan Rooney was chairman of the Pittsburgh Steelers. He helped the team win championships and also diversified hiring in the league.

April 3, 2017 • The University of North Carolina is up for its sixth overall title, while Gonzaga is going for its first, in Monday night's championship game.

April 3, 2017 • Gonzaga and North Carolina face off in Phoenix — both earned tough wins in the national semifinals over the weekend. On Sunday, South Carolina won the women's championship over Mississippi State. 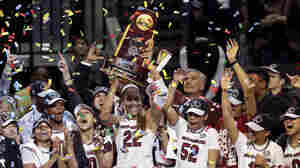 South Carolina forward A'ja Wilson (22) and her teammates celebrate their win over Mississippi State in the final of the NCAA women's college basketball tournament on Sunday. Eric Gay/AP hide caption

April 2, 2017 • The lady Gamecocks earned their first national title with a 67-55 win over Mississippi State. It's also a first for former player, Coach Dawn Staley, who had made several Final Fours in her prime. 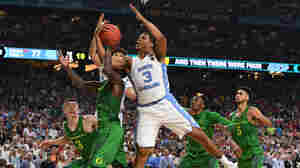 North Carolina's Kennedy Meeks (3) of the and Jordan Bell (1) of the Oregon get tangled up during the Final Four Semifinal. Jamie Schwaberow/NCAA Photos via Getty Images hide caption

April 2, 2017 • With Saturday's 77-76 victory, North Carolina is one step away from the chance at a redemptive title after losing at the buzzer in last season's championship game. They'll face Gonzaga Monday night.