NBA Finals Are No Surprise

May 31, 2018 • For a fourth straight year it's the Golden State Warriors and Cleveland Cavaliers in the NBA Finals. It's the matchup that many figured would happen at the beginning of the season.

NBA Finals Are No Surprise

May 31, 2018 • A top North Korean official is meeting with Secretary of State Mike Pompeo to plan a summit between President Trump and Kim Jong Un. Also, an update on Europe and the Iran nuclear deal.

May 26, 2018 • The NFL announced a new policy that will fine teams if any of their players kneel during the national anthem.

May 24, 2018 • The NFL says its players are no longer allowed to kneel during the national anthem. The league says those who do will be fined. Protests became a huge issue last season.

May 23, 2018 • The NFL announced it will require players who are on the field to "stand and show respect for the flag and anthem." This comes after months of debate that started as protests against police brutality.

New Dallas Mavericks CEO Has A Big Job Ahead Of Her

May 22, 2018 • Cynthia Marshall was tapped to help the franchise through a sexual harassment and domestic abuse scandal. Skeptical at first, Marshall wants to make the Mavericks a shining example for the NBA.

New Dallas Mavericks CEO Has A Big Job Ahead Of Her

May 11, 2018 • The NBA is down to its final four teams in the quest for the next champion. There are no surprises, but basketball fans are giddy with excitement about the players and the coaches about to compete for a title.

May 5, 2018 • Boston played Philadelphia and Toronto played Cleveland in last night's NBA semifinals while the Kentucky Derby is Saturday.

April 12, 2018 • The most talked about baseball player so far this season is Los Angeles Angel Shohei Ohtani. He's electrified people with his pitching and hitting. It's an unusual talent to be good at both. But how rare is it? 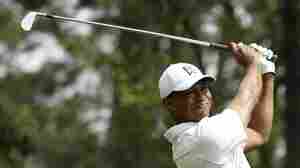 Tiger Woods hits on the fourth hole during the second round at the Masters golf tournament Friday. Chris Carlson/AP hide caption

5 Thoughts On 'Moving Day' At The Masters

April 7, 2018 • American Patrick Reed holds a two-shot lead over Australia's Marc Leishman going into the Masters golf tournament Saturday. The field has been whittled from 87 to 53 as the third round begins.

April 7, 2018 • We get some of the week's sports highlights, including the much-anticipated return of Tiger Woods to the Masters.

April 2, 2018 • College basketball has one more game — the men's national championship. Both the mens' and womens' tournaments have had magic moments during a year when the state of college basketball is in question.

March 24, 2018 • The NCAA men's tournament is down to eight teams, and baseball makes an unexpected entry in the omnibus spending bill. 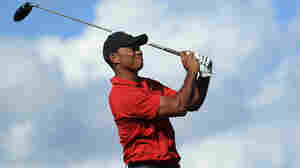 Tiger Woods plays his shot from the 16th tee Sunday during the final round of the Arnold Palmer Invitational at Bay Hill Club and Lodge in Orlando. Sam Greenwood/Getty Images hide caption

March 19, 2018 • Woods is starting to show renewed spark in his golf game. He seems to have found his game again Sunday after a five-year winless streak.

After Dramatic Downfall, Tiger Woods Might Finally Be Making A Comeback

March 16, 2018 • The last time Tiger Woods won a golf tournament was 2013. Once the world's top player, he's struggled with a myriad of health issues and off-the-course distractions. But he's back and close to winning again.

After Dramatic Downfall, Tiger Woods Might Finally Be Making A Comeback