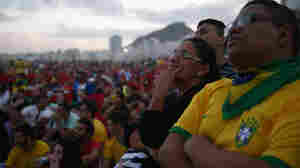 Brazil fans on Copacabana Beach were subdued during the third-place game against the Netherlands on Saturday. The national team gave them little to cheer about. Mario Tama/Getty Images hide caption

July 13, 2014 • The World Cup ends Sunday with the Germany-Argentina match. Brazil finished its run in the tournament Saturday after two consecutive losses that have set off some national soccer soul-searching.

July 11, 2014 • Melissa Block talks to NPR's Tom Goldman about the final two matches in the World Cup: Brazil against the Netherlands in a fight for third place, and Argentina against Germany in the final.

Argentina Steps Past The Dutch In Penalty Kicks

July 9, 2014 • Argentina beat out the Netherlands for a trip to the World Cup final, winning the game in penalty kicks. In the final, Argentina will face Germany, which dismantled Brazil in stunning fashion.

Argentina Steps Past The Dutch In Penalty Kicks

Brazil Wakes Up To Find Tuesday's Nightmare Was Not A Dream

July 9, 2014 • Host country Brazil was eliminated from the World Cup in epic fashion: Germany defeated Brazil 7-1 during the semifinal match. Brazilians are wondering how their beloved team could be so pulverized.

Brazil Wakes Up To Find Tuesday's Nightmare Was Not A Dream

July 8, 2014 • Germany poured seven goals on Brazil in the World Cup semifinal. The home team had faced a steep challenge, playing without two key players, one injured and one suspended.

Brazil Faces Germany Without 2 Of Its Best Players

July 8, 2014 • Star player Neymar is out with a back injury. The team will also be without star defender Thiago Silva, who was penalized earlier in the tournament. So how does the host team go on against Germany?

Brazil Faces Germany Without 2 Of Its Best Players

July 5, 2014 • Despite Brazil's win against Colombia in the quarterfinals, fans aren't entirely sure they can win the tournament. One key player is out for an injury; another for racking up too many penalties.

July 4, 2014 • NPR's Tom Goldman talks with Robert Siegel from in Rio, Brazil, about Friday's World Cup matches — between Brazil and Colombia, and between Germany and France.

July 1, 2014 • The U.S. men's soccer team is back in action on Tuesday at the World Cup in Brazil. There is no room for error in the match against Belgium — lose and the U.S. team is finished.

U.S. Readies To Step Onto Stage For Knockout Round Drama

June 30, 2014 • In its first match of the knockout round, the U.S. soccer team plays Belgium on Tuesday. NPR's Tom Goldman previews the game, explaining what to expect from the matchup.

U.S. Readies To Step Onto Stage For Knockout Round Drama

June 29, 2014 • The host nation's team lives to play another day after a riveting match Saturday against Chile. The game was decided by a tie-breaking shootout, with a final score of 3-2.

Despite Losing To Germany, U.S. Advances In World Cup

June 27, 2014 • The U.S. men's soccer team moves on to the World Cup's round of 16. They lost to Germany, but advance because Portugal beat Ghana. The team will get to rest a bit before playing Belgium on Tuesday.

Despite Losing To Germany, U.S. Advances In World Cup

In Loss To Germany, U.S. Escapes With A Skid From 'Group Of Death'

June 26, 2014 • Despite losing to Germany in the final match of the group stage, the U.S. soccer team is advancing to the knockout round of the World Cup.

In Loss To Germany, U.S. Escapes With A Skid From 'Group Of Death'