September 26, 2014 • A week after NFL Commissioner Roger Goodell announced he made mistakes, many questions remain about his future role in the league.

September 23, 2014 • A handful of Major League Baseball teams have clinched their divisions — others are in tight races. This is the final week of baseball's regular season.

NFL Commissioner Roger Goodell: 'I Got It Wrong'

September 19, 2014 • Calls for NFL Commissioner Roger Goodell to resign continue as the league grapples with how it handled a series of abuse scandals. Goodell has kept a low profile during the crisis.

NFL Commissioner Roger Goodell: 'I Got It Wrong'

NFL Proposes Plan To Stop Domestic Violence By Its Players

NFL Proposes Plan To Stop Domestic Violence By Its Players

September 11, 2014 • Former FBI director Robert Mueller III will lead the investigation into how the NFL handled the Ray Rice domestic violence case. Many have criticized the league for not acquiring an elevator security video made public this week by the website TMZ. In it, Rice throws a punch that left his then-fiance unconscious.

September 9, 2014 • A leaked video of the altercation between football star Ray Rice and his then-fiancee, Janay Palmer, that took place earlier this year has led the Baltimore Ravens to terminate Rice's contract.

September 7, 2014 • The WNBA finals begin Sunday, and the Chicago Sky are up against the Phoenix Mercury.

September 4, 2014 • Something new is coming to the NFL this year: high-tech tracking devices on players. In some stadiums, they'll give teams and TV audiences real-time readouts of player movements. They'll also give coaches tons of data to fine-tune their game plans.

August 28, 2014 • College football's top division has a new playoff system this season. We'll talk about how it works, and how the field of potential contenders looks.

August 21, 2014 • Mo'ne Davis has dazzled at this year's World Series. The 13-year-old pitching sensation is already throwing in the 70s, as in miles per hour. Some believe she could be an elite pitcher.

August 14, 2014 • A U.S. district court judge ruled that the NCAA was violating federal anti-trust law by prohibiting payments to athletes whose names, images and likenesses are used in video games and TV broadcasts. The NCAA has appealed. So, what now?

Federal Judge Rules Some College Players Are Entitled To Payment

August 8, 2014 • College athletes scored a victory in court. A federal judge issued a ruling that the NCAA violated antitrust law by prohibiting athletes from payment for the use of their names, images and likenesses.

Federal Judge Rules Some College Players Are Entitled To Payment

With 50 Games Left Till Playoffs, Few MLB Teams Out Of Contention

August 8, 2014 • In the dog days of summer, Major League Baseball's regular season has nearly 50 games left. Fans have their eyes on postseason play, and every division has tight races.

With 50 Games Left Till Playoffs, Few MLB Teams Out Of Contention 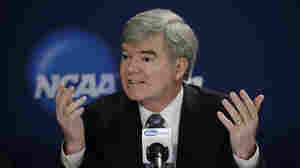 August 7, 2014 • Major college sports programs could take a significant step toward sharing their wealth. The NCAA Board of Directors is to vote on a plan to restructure Division I athletics.

August 5, 2014 • Federal prosecutors have formally charged the owner of an anti-aging clinic with distributing illegal steroids. Anthony Bosch surrendered to federal agents, and he has been cooperating with investigations. Last year, Major League Baseball suspended a dozen players, including Alex Rodriguez, with ties to Bosch and his clinic.