April 30, 2012 • Teams in the NBA playoff have begun their quest to be the champion. The headline story of the weekend: Chicago superstar Derrick Rose is out with a torn knee ligament.

Olympic Stars May Overshadow Other Athletes

April 25, 2012 • The Summer Olympic Games in London start in 93 days. Of the 10,500 athletes, the attention is on at least two of them: swimmer Michael Phelps and Jamaican sprinter Usain Bolt.

Olympic Stars May Overshadow Other Athletes

As NBA Playoffs Near, Teams Grapple With Injuries

April 19, 2012 • There is one more week left in the lockout-shortened, action-packed NBA regular season. Chicago, Miami and Oklahoma City head toward the finals with strong records — as do the Los Angeles Lakers and San Antonio Spurs.

As NBA Playoffs Near, Teams Grapple With Injuries

April 18, 2012 • The most successful coach in college basketball history is stepping down. Pat Summitt has led the women's basketball team at the University of Tennessee for 38 seasons, racking up 1,098 wins. She's dealing with early-onset dementia and will take the new position of head coach emeritus.

April 10, 2012 • The new Major League Baseball season isn't even a week old, and already there's controversy brewing. Ozzie Guillen, the new manager of the Miami Marlins, is holding a news conference Tuesday to apologize for recent comments he made about Cuban leader Fidel Castro.

April 9, 2012 • The first weekend of the Major League Baseball season is over, and already there are some early surprises. In New York, the Mets are 3-0, while the Yankees are 0-3.

April 4, 2012 • The Baylor University women's basketball team capped an undefeated and unprecedented 40-win season Tuesday night with a resounding 80-61 win over Notre Dame in the NCAA championship game. The Bears were led by their 6-foot-8 national player of the year Brittney Griner, who had 26 points

April 3, 2012 • Notre Dame takes on Baylor on Tuesday night for the NCAA women's basketball title. The Fighting Irish have a challenge on their hands. Baylor is undefeated this season and has a superstar player, Britney Griner, who is 6 feet 8 inches tall.

April 3, 2012 • Notre Dame faces a juggernaut: the undefeated Baylor Lady Bears and their 6-foot, 8-inch, star Brittney Griner. If Baylor wins, the team will finish the season undefeated and be the first in NCAA basketball to win 40 games in one season.

April 2, 2012 • In NCAA women's basketball tournament action, two semi final games were held Sunday. Notre Dame and Baylor will square off in the final which will be played Tuesday night. Baylor is trying to complete a historic undefeated season. 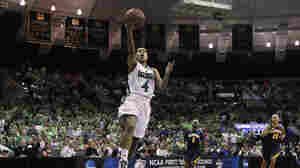 Notre Dame guard Skylar Diggins goes up during the second round of NCAA women's tournament basketball in a game against California. Charles Rex Arbogast/AP hide caption

April 1, 2012 • The NCAA Division 1 women's tournament gets criticized for not having enough true March Madness moments. Yet sometimes the elite teams gather, as they are in Denver, in such a show of force and talent that a fan tends not to miss the little guys.

A Shot At The Buzzer Caps NCAA Drama

March 18, 2012 • The madness marches on. Sunday holds eight more games in the NCAA Division 1 men's basketball tournament. On Saturday, thankfully, there were no major rip-up-your-bracket upsets, but there was plenty of drama.

A Shot At The Buzzer Caps NCAA Drama

March Madness Revs Up With 'Round Of 64'

March Madness Revs Up With 'Round Of 64' 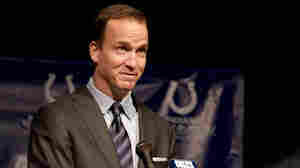 Peyton Manning during the news conference Wednesday in Indianapolis when it was announced that he's leaving the NFL's Colts. Joey Foley/Getty Images hide caption

Peyton Manning Is A Hall Of Fame Tipper Too

March 8, 2012 • When he had dinner in North Carolina the other night, the NFL quarterback added $200 to a bill that already had a big gratuity tacked on. But the 50 percent tip didn't work out so great for the waiter after he put a photo of the bill online.