Accessibility links
Adam Hochberg Based in Chapel Hill, North Carolina, Adam Hochberg reports on a broad range of issues in the Southeast. Since he joined NPR in 1995, Hochberg has traveled the region extensively, reporting on its changing economy, demographics, culture, and politics. 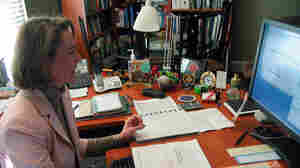 February 9, 2010 • Some companies have no traditional office at all — and they like it that way. At one multimillion-dollar company, all 40 employees telecommute. The firm weeds out job applicants who look down on working from home. 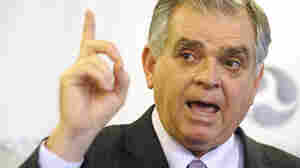 January 27, 2010 • Transportation Secretary Ray LaHood has issued a full ban on texting while driving trucks and large buses. The American Trucking Associations and American Bus Association say they support the federal ban, as do many rank-and-file drivers.

January 21, 2010 • Former Sen. John Edwards admitted Thursday that he is the father of a young girl born to a woman who worked on his presidential campaign. Edwards had earlier confessed to having an affair with the woman, but denied paternity. Friends say Edwards now wants to "move on with his life," but he faces a federal criminal investigation into payments that his supporters allegedly funneled to his mistress during the campaign.

January 21, 2010 • Virginia's Transportation Board voted to reopen 19 closed Interstate rest stops. They were shut last summer amid budget cuts, much to the dismay of travelers.

January 20, 2010 • Japan Airlines filed for bankruptcy Tuesday and said it would slash its workforce dramatically. Nevertheless, Delta Air Lines and American Airlines are eager to create a business alliance with JAL, which in 2009 was the largest airline in Asia. If American were to lose the competition, analysts say it would be far weaker on routes between the United States and Asia.

January 15, 2010 • Haiti's international airport in Port-au-Prince is struggling to accommodate planes filled with supplies, relief workers and volunteers. There's no electricity, the air traffic control system is down, and pilots who've flown in to the airport say the damage from the earthquake is severe.

January 12, 2010 • When the South Carolina Legislature begins its yearly session Tuesday, it will decide whether to take action against disgraced Gov. Mark Sanford. Sanford left the state without notice last summer for a secret rendezvous with an Argentine woman he referred to as his "soul mate." In the days after the affair came to light, a majority of legislators called for Sanford to resign or face impeachment. The Legislature now is merely considering a censure.

January 6, 2010 • The snowy, cold weather gripping most of the county is starting to affect the economy. It has disrupted travel and helped push up energy prices. Citrus growers also are working to try to protect their crops. Merchants report retails sales are down. 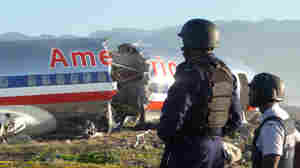 Officials look at the wreckage of American Airlines Flight 331, which skidded off the runway while trying to land in Kingston, Jamaica, on Dec. 22. Kerry Sanders/NBC NewsWire/AP hide caption

January 5, 2010 • During the same month that Flight 331 skidded off a runway in Jamaica, two other American planes experienced problems as they landed. In these instances, a tip of the wing touched the runway. Nobody was injured on either flight, but the agency wants to increase oversight of the airline to figure out if there's a pattern.

December 23, 2009 • There may be very little Christmas cheer this year in Franklin, Va. International Paper, the economic heart of the town of 9,000 people, has announced that it will close its plant soon, eliminating all 1,100 jobs.

December 23, 2009 • This holiday season, expect flights to be packed tightly. Industry watchers say travelers should be prepared to fight for carry-on baggage space and pay for food, pillows and other onboard amenities.

December 21, 2009 • Starting this spring, delayed airliners must return to a terminal or face hefty fines. They must also offer food and water, maintain lavatories and provide necessary medical attention. The outcry over scenes like this one from a stalled 2007 JetBlue flight promoted the new rules.

December 15, 2009 • Marvin Rogers' political profile may sound familiar: He's an energetic African-American leader, a community organizer, and a charismatic speaker who talks about bringing civility to politics. He's also a Republican from South Carolina who's determined to help his party succeed.

November 20, 2009 • Boeing has moved to South Carolina from its ancestral home in the Pacific Northwest to build the 787 Dreamliner. The company will spend less on labor and receive more than $175 million in state incentives. But it will have to train a new workforce, which Boeing's Seattle unions predict may be the undoing of the Southern operation.