October 30, 2009 • Not everyone who has been put away for 25 years to life under California's three strikes law has committed a violent crime, including two people convicted of stealing. Both challenged the law — and while one was released, the other wasn't as lucky.

October 29, 2009 • Under California's three strikes sentencing law, criminals' fate may depend as much on where they're arrested as on what they're arrested for. Los Angeles County District Attorney Steve Cooley, who supports the law, almost never charges a nonviolent offense as a third strike. But 100 miles north in Kern County, District Attorney Ed Jagels almost always does. 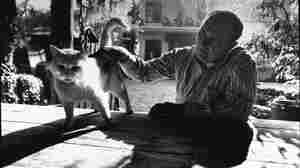 Mike Reynolds pets his cat outside his home in 1992, the year his 18-year-old daughter, Kimber, was shot and killed by a repeat offender. Two years later, his ballot initiative for California's three strikes law passed overwhelmingly. He has fought tirelessly to uphold it ever since. John Storey/Time Life Pictures/Getty Images hide caption

October 28, 2009 • California voters passed the nation's strictest three strikes law in 1994. The "third strike" carries a mandatory 25 years to life. Mike Reynolds, whose daughter was murdered in 1992, brought the ballot initiative and has fought to uphold it since. But Sue Reams, whose son is in prison because of it, is working for change.

October 9, 2009 • An energetic young conductor from Venezuela is taking the reins of the Los Angeles Philharmonic as its new music director. Gustavo Dudamel, a product of the revolutionary Venezuelan music teaching technique called "El Sistema" brings something of a rock star aura to his new post.

September 28, 2009 • California may become the first state to regulate how much energy flat screen TVs use. If the new rules are approved in November as expected, many flat screens sold in California in 2011 will have to use a third less energy than they do now. Some retailers have banded together to oppose the regulations.

September 18, 2009 • California's prison system is the largest in the country. In fact, the inmate population is so big, it's violating a federal court ruling and costing the state millions more than it can afford. But the state has found it's not so easy just to open the doors and set prisoners free.

On The Fast Track?

California Edges Ahead In High-Speed-Train 'Race'

September 3, 2009 • California's ambitious 800-mile high-speed-rail network is 13 years in the works, making it a leading contender in the race to win federal funding. But some critics question the need for the project, which could cost close to $45 billion.

California Edges Ahead In High-Speed-Train 'Race'

August 31, 2009 • The Los Angeles County Sheriff's Department says five people who refused to heed wildfire evacuation orders are trapped in a canyon and it's too dangerous to rescue them. The wildfires are threatening thousands of homes in the area, prompting Gov. Arnold Schwarzenegger to declare a state of emergency in four counties.

Bid For Crypt Above Marilyn Monroe Falls Through

August 27, 2009 • For the dead and famous, arguably no neighborhood is more desirable than the mausoleum at the Westwood Village Memorial Park cemetery in Los Angeles. Among the many stars resting there is the iconic Marilyn Monroe. The crypt directly above her was recently auctioned on eBay, but there's a problem closing the deal.

Bid For Crypt Above Marilyn Monroe Falls Through

August 6, 2009 • Los Angeles Police Chief William Bratton shocked the city when he announced Wednesday that he is resigning. He's leaving to take a job in the private sector. Bratton is credited with overhauling a scandal plagued department and restoring its public image.

August 5, 2009 • Los Angeles Police Chief William Bratton is resigning today after seven years on the job. The decision is seen as a surprise. During his tenure, Bratton instituted vast reforms of the once-scandalized police department.

July 31, 2009 • Scores of children have been sent home from summer camps across the nation this summer with flulike symptoms. The outbreaks have raised concerns about what schools may face this fall.

July 21, 2009 • California's unprecedented fiscal meltdown has a growing number of people looking for new options. Fixing the dysfunction is the goal of new bipartisan groups looking at possible solutions, including a major overhaul of the state's often-amended constitution.

July 13, 2009 • For 20 years, California politicians have quipped that the state is ungovernable. While some have blamed questionably drawn legislative districts and ballot initiatives for the problems, one group says change will only come if the state's constitution is rewritten.