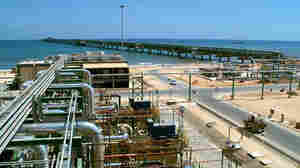 A production plant on the short of Mellitah, Libya, opened in 2004. Owned by Eni, the Italian oil and gas company, the facility is part of a pipeline that connects Libya to Sicily. Political unrest in the African nation is having effects in the worldwide oil market. Eni Press Office/AP hide caption

February 25, 2011 • The unrest in Libya has caused a spike in prices even though its oil hasn't stopped flowing. One reason: All oil isn't created equal, and Libya's sweet crude might not be easily replaced by merely boosting production of Saudi Arabia's sour crude, experts say. 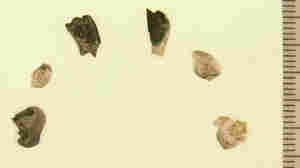 Teeth from a cremated child were excavated from a site believed to be 11,500 years old. The color differences show uneven burning. The scale is in millimeters. Science/AAAS hide caption

February 25, 2011 • Archaeologists made the discovery in a settlement that housed some of the very first North Americans. Researchers have been studying the region for more than 70 years, but until now have not found anything from that time period. 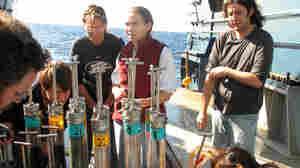 Researchers aboard the Atlantis, a research vessel operated by the Woods Hole Oceanographic Institution, examine core samples brought up from the sea floor of the Gulf of Mexico by the deep-sea submersible Alvin on Nov. 24, 2010. The scientific community is conflicted about the lack of direction, coordination and funding in studying the aftermath of the Gulf of Mexico oil spill. Richard Harris/NPR hide caption

February 24, 2011 • Scientists studying the after-effects of the BP oil spill in the Gulf of Mexico are frustrated at the lack of focus in the research effort as well as the shortage of money for such a huge undertaking. 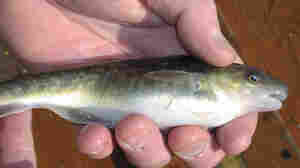 A mature Atlantic tomcod collected from the Hudson River. These tomcod evolved to handle excessive amounts of industrial pollutants, like PCBs and dioxin, in the water. Science/AAAS hide caption

February 17, 2011 • Tomcod fish found in rivers in New York and New Jersey evolved to handle dangerous chemicals that were dumped in the river between 1947 and 1976, a study finds. The fish aren't mutants, though — some had genetic resistance that allowed them to tolerate the PCBs and dioxins that entered the water. 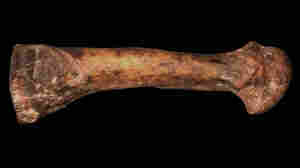 This foot bone, the fourth metatarsal, connects the heel to the fourth toe. The 3 million-year-old fossil suggests that Australopithecus — Lucy and her kind — could have been the first upright walkers. Carol Ward and Elizabeth Harman/Science/AAAS hide caption

February 10, 2011 • A new fossil find from Ethiopia suggests that the first full-time walkers with the first modern foot weren't human at all, they were Australopithecus — aka Lucy. But scientists caution that just because Lucy and her kind could walk doesn't prove they gave up life in the trees permanently. 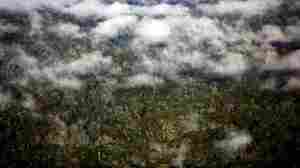 Major droughts in 2005 and 2010 cut into the Amazon's ability to absorb carbon dioxide from the atmosphere. Drought reduces carbon-absorbing tree growth, and opens the door to more forest fires, which release carbon into the air. Seen here, a Peruvian section of Amazonia. John W. Poole/NPR hide caption

February 4, 2011 • In 2010, the Amazon experienced its second major drought in five years — both of which were thought to be once-in-a-century events. Researchers say continued dry conditions could turn the carbon-absorbing forest into a major source of carbon emissions. 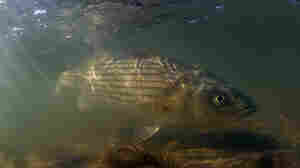 During the 1980s, wildlife managers said striped bass like this one were overfished. Now, it appears that a weather pattern known as the Atlantic Multidecadal Oscillation may have been a contributing factor to the declines. Jay Fleming/Jay Fleming Photography hide caption

Atlantic Weather May Be Culprit In Fish Decline

January 25, 2011 • Declining catches of striped bass may not always be due to overfishing. Researchers say a periodic weather pattern in the North Atlantic may be responsible for the low fish numbers. And understanding how it works may help set fishing limits in the future.

Atlantic Weather May Be Key Culprit In Fish Decline 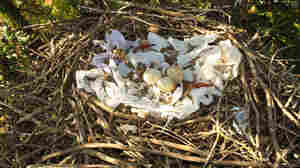 January 20, 2011 • A black kite nest decorated with bits of white plastic may mean it's the home of one tough bird, says a new study. The white plastic somehow signals "keep away from my eggs" — and only the strongest birds threw down these warnings.

Haitians watch the L.A. County Search and Rescue working at a collapsed building in downtown Port-au-Prince, Jan. 16, 2010. Weak walls allow for a "pancake collapse" like this one, one engineer says. David Gilkey/NPR hide caption

January 14, 2011 • Earthquake engineers say many casualties in the Haiti earthquake could have been avoided if buildings had been built better. So now engineers are trying to improve construction standards as the country rebuilds. But they face two key challenges: poverty and corruption. 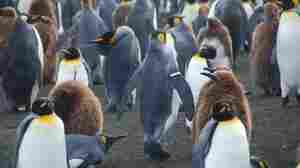 Researchers say metal flipper bands like the one on this penguin lowered survival rates and harmed the number of chicks the banded birds produced. Benoit Gineste/Nature hide caption

Banding Penguins Could Drag Down Their Population

January 12, 2011 • The bands some researchers use to track the agile animals slows them down in the water. This results in lower survival rates and fewer chicks, a new study finds. "In other words, only the superathletes are surviving," one researcher says. 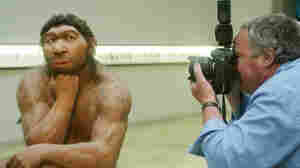 A Lens On History: Advances in DNA technology have given scientists a new tool with which to study ancient human origins. "I think ancient DNA becomes very powerful" now, says one researcher, "because it gives you a direct look into the past." Here, a photographer shoots a reconstruction of a Neanderthal man at a museum in Germany. Sebastian Willnow/AFP/Getty Images hide caption

December 28, 2010 • Though Neanderthals went extinct long ago, advances in DNA technology are shining new light on our ancient relatives. This year several scientists used DNA to reveal not just similarities but also genetic differences between Neanderthals and us. 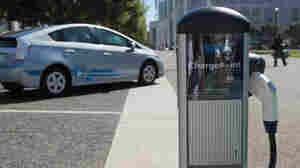 December 14, 2010 • Plug-in electric cars are in showrooms and on the highways, but there's currently no convenient way to recharge them. Electric grid engineers are now trying to build an infrastructure to handle the cars' erratic demand for electricity. 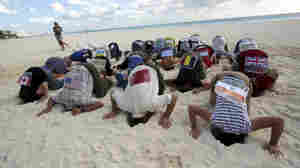 Sierra Club activists wearing flags, representing more than 20 countries, take part in a protest by hiding their heads in the sand in Cancun last week. The group said countries participating in the United Nations Framework Convention on Climate Change in Cancun are not doing enough to stop climate change. AP hide caption

December 6, 2010 • Experts say outcomes from the U.N. climate meeting in Cancun will not include a new international treaty. Rather, a piecemeal approach, with individual countries setting their own goals for greenhouse gas emission cutbacks, is likely. 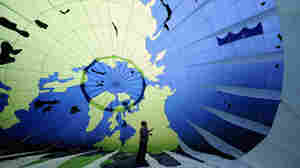 Climate scientists and environmental advocates face an uphill battle as more Americans deny that global warming is real despite scientific evidence to the contrary. Here, a Greenpeace member checks the inside of a hot air balloon before it's launched in Cancun, Mexico. Luis Perez/AFP/Getty Images hide caption

December 5, 2010 • The number of Americans who believe global warming is a scientific fact has dropped. Environmental groups and climate scientists who say the evidence for warming is clear are scratching their heads over this reversal and scrambling to find a new strategy. 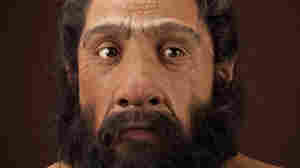 November 16, 2010 • Humans are the smartest creatures on Earth, and scientists are trying to figure out just how we got that way. Compared with our closest relative, the Neanderthal, who grew quickly and died young, our "slow growth" seems to explain our more sophisticated brain.