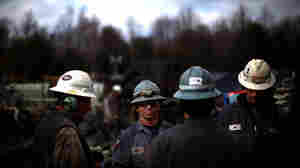 Demand for natural gas has created a hydraulic fracturing or fracking boom; since 2008 over 5,000 new wells have been drilled nationwide. Workers at Chesapeake Energy, one of the biggest gas companies conducting fracking, are seen on the job site near Towanda, PA. David Gilkey/NPR hide caption

May 14, 2012 • Industry has ruined a lot of Pennsylvania's water. Coal mining companies hammered the state, leaving behind acidic water that turned thousands of miles of streams into dead zones. People in the state are looking for ways to make sure the fracking boom doesn't deal another blow to its water.

Conservator Angelyn Bass cleans and stabilizes the surface of a wall of a Mayan house that dates to the ninth century. The figure of a man who may have been the town scribe appears on the wall to her left. Tyrone Turner/Copyright 2012 National Geographic hide caption

May 13, 2012 • Archaeologists have stumbled on a room full of wall paintings and numerical calculations in the buried ninth century city of Xultun. The room was apparently an astronomer's workshop, with calculations painted on the walls counting lunar cycles and predicting eclipses. 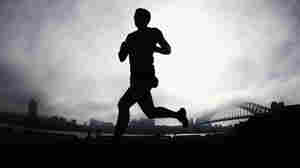 May 7, 2012 • Endurance athletes sometimes say they're "addicted" to exercise, and research suggests that may not be an overstatement. 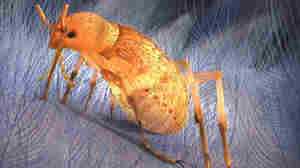 An illustration of the Chinese Jurassic "pseudo-flea," which lived in the Middle Jurassic in northeastern China. Wang Cheng/Current Biology hide caption

May 6, 2012 • The greatest predators that ever roamed Earth suffered just as we mammals did: Large, flealike bloodsucking insects liked to dine on the dinos and even may have carried diseases.

April 12, 2012 • Scientists are finding a large increase in the number of small earthquakes in the midcontinent of the U.S. They suspect wastewater wells, whose numbers are growing as the oil and gas industry increases hydrofracturing. 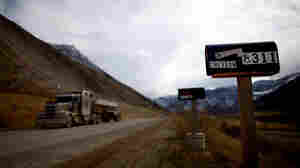 April 11, 2012 • The salty, toxic wastewater that's used in hydrofracking and other gas drilling is likely to blame for small earthquakes in the Midwest, a new study from the U.S. Geological Survey concludes. The water is pumped deep underground, where it lubricates faults and causes them to slip. 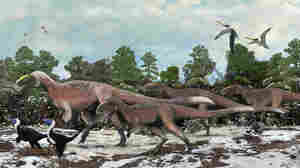 April 5, 2012 • Known by its nickname "beautiful feathered tyrant," Yutyrannus huali is a cousin of T. rex, 30 feet long and about 3,000 pounds. It had no trouble tearing its prey to pieces, but the dinosaur was also a snappy dresser — it was covered in downy feathers. 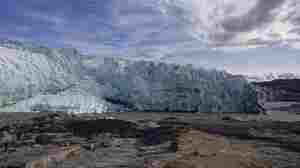 A wobbling of the Earth on its axis about 20,000 years ago may have kicked off a beginning to the end of the last ice age. Glaciers in the Arctic and Greenland began to melt, which resulted in a warming of the Earth, a new study says. Above, Greenland's Russell Glacier, seen in 1990. Veronique Durruty/Gamma-Rapho/Getty Images hide caption

Shake It Off: Earth's Wobble May Have Ended Ice Age

April 5, 2012 • Some 20,000 years ago, the Earth wobbled on its axis. That happens periodically. But according to a new scenario, this particular time, that wobble sparked a chain reaction of events that melted glaciers and led to a gradual warming of the planet.

Shake It Off: Earth's Wobble May Have Ended Ice Age 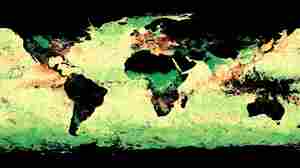 April 4, 2012 • Tiny particles from power plants and fires help create new clouds, which shade the oceans from the sun. This means changes in sea-surface temperatures. And that has profound effects on weather, influencing the time and amount of rainfall in West Africa, and even the number, strength and path of hurricanes. 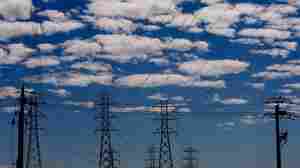 March 12, 2012 • Grid operators constantly match what power plants are producing with what people and their TVs, microwaves and air conditioners need. But when the electricity comes from unpredictable sources, like wind or solar power, balancing the grid is a challenge, a new study finds.

March 11, 2012 • All of Japan's nuclear power plants will be offline by April and might never restart. That's forcing the country to increase its reliance on coal, oil and natural gas. This could cost the country an extra $100 million per day and significantly increase carbon dioxide emissions.

February 22, 2012 • Peter Gleick is an outspoken proponent of scientific evidence that humans are responsible for climate change. This week, the MacArthur "genius" grant recipient shocked the scientific community by admitting to lying to obtain internal documents from the Heartland Institute, a group skeptical of climate change.

Nature Has A Good Beat, But Can You Dance To It?

February 21, 2012 • Rhythm in music is about timing — when notes start and stop. And now scientists say they've found a curious pattern that's common to musical rhythm. It's a pattern also found in nature.

Nature Has A Good Beat, But Can You Dance To It? 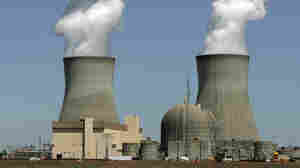 February 10, 2012 • Southern Co. will build the reactors at its Vogtle site in Georgia. An industry-backed group hopes it's the first wave of new reactors, but a coalition of groups plans to sue to stop the project. Among its arguments: Engineers are still figuring out what went wrong at the Fukushima meltdown in Japan last year.

January 31, 2012 • The Florida Everglades is infested with Burmese pythons. To keep them from spreading, the U.S. Fish and Wildlife Service is making it illegal to import the pythons into the country, or transport them across state lines. Scientists have discovered the pythons are doing more damage than ever imagined.