September 14, 2011 • In Afghanistan, a bloody 20-hour insurgent attack on the capital Kabul ended Wednesday morning. All the assailants are dead. The attackers took control of a building that had a clear line of fire to the U.S Embassy and NATO headquarters in the heart of the city.

September 13, 2011 • The Taliban is claiming responsibility for gunfire and explosions heard around the Afghan capital Kabul. Insurgents have been firing in the direction of the U.S. Embassy as well as other landmarks.

September 9, 2011 • In Afghanistan, Ahmad Shah Massoud was known as the Lion of Panjshir. And thanks to him, the Panjshir Valley was one of only two places the Taliban never conquered. On Sept. 9, 2001, suicide bombers killed Massoud. 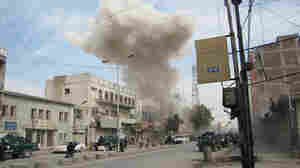 Jalalabad, in Afghanistan's mountainous eastern region along the border with Pakistan, is the last place Osama bin Laden was seen before he vanished in 2001. In this photo from February 2011, smoke rises from an area where Taliban suicide bombers detonated their devices at a bank. Pajhwok Afghan News/AFP/Getty Images hide caption

September 8, 2011 • The Afghan city of Jalalabad is where top al-Qaida leaders were last seen as they fled Kabul after the attacks against the U.S. on Sept. 11. The city then went on to become a hot bed of insurgent activity. A decade after Sept. 11, the city is trying to stay at peace. 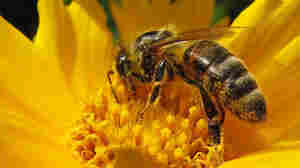 August 23, 2011 • Seif al-Islam had been reported captured by rebels, but he resurfaced at a Tripoli hotel early Tuesday. Though rebels have been quick to claim they control most of Tripoli, that does not seem to be the case. Snipers and ambushes have stalled a clear-cut rebel victory.

August 23, 2011 • Reports from New York suggest a judge will drop all criminal charges against Dominique Strauss-Kahn. The news will likely have mixed reaction in France, where people are sharply divided over their feelings toward the former head of the IMF.

August 23, 2011 • There is confusion in Libya over just what progress the rebels have made in their battle to take the capital Tripoli. It also raises questions about what is happening with the transitional government in the rebel capital of Benghazi.

Assad Warns Other Countries To Stay Out of Syria

August 22, 2011 • Syria's president Bashar Assad has warned against military intervention in his country. He appeared on state-run television Sunday and repeated plans to introduce political change to the country.

Assad Warns Other Countries To Stay Out of Syria

White House Says It's Time For Gadhafi To Go

August 22, 2011 • President Obama says it is time for Libyan leader Moammar Gadhafi's regime to officially end. The U.S. has played a key role in supporting the NATO campaign that began in March — aimed at protecting civilians and the rebels.

White House Says It's Time For Gadhafi To Go

August 17, 2011 • In London, a parliamentary committee has released documents that question James Murdoch's July testimony about the News of the World phone-hacking scandal. A newly revealed letter from a jailed reporter claims hacking was "widely discussed" at editorial meetings at the now closed British paper.

August 16, 2011 • French President Nicolas Sarkozy and German Chancellor Angela Merkel are discussing what additional measures can be taken to contain the crisis. France is struggling to maintain its triple-A bond rating — while the Germans try to limit expectations that they will always come to the rescue of countries in trouble.

August 15, 2011 • The trial of ousted Egyptian President Hosni Mubarak resumed Monday in a heavily-guarded courtroom at the police academy in Cairo. Mubarak is on trial for numerous counts of corruption and for ordering the killing of hundreds of protesters earlier this year.

August 15, 2011 • In Libya, rebel have fought their way out of the mountains to a key coastal city — only 30 miles from the capitol of Tripoli. In a defiant speech Sunday night, Libyan leader Moammar Gadhafi exhorted his forces to fight, even as reports surfaced of talks between the regime and the rebels.

August 11, 2011 • The streets of London and other British cities were mostly quiet Wednesday night amid a massive police presence that has helped stop the wave of violence and looting that's wracked Britain since the weekend. Courts there worked through the night to process some of those arrested. Parliament is meeting for an emergency session after Prime Minister David Cameron recalled members from their summer break.