November 29, 2010 • President Obama has announced a federal pay freeze for all civilian workers. The White House expects the freeze to save more than $28 billion over the course of the next five years. The freeze does not apply to military personnel. 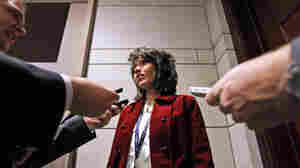 November 17, 2010 • South Dakota's Kristi Noem, who narrowly defeated four-term incumbent Rep. Stephanie Herseth Sandlin, has said her top priority in Washington will be the debt and the deficit.

November 17, 2010 • John Pistole told a Senate panel Tuesday that the measures are a balance between privacy and security. But the procedures -- a choice between a full-body scan and an invasive pat-down -- have everyone from civil liberties groups to airline pilots upset.

November 16, 2010 • Just in time for the holiday travel season, the Department of Homeland Security has rolled out new passenger security procedures. The procedures are for those travelers who refuse to use metal detectors or body scanners. The rules are causing a stir among passengers and even the pilots union is objecting.

November 11, 2010 • As GOP leaders search for ways to cut the deficit, they are already pointing to the federal workforce, which some believe is too big and overpaid. But there are disagreements over how much federal workers make in comparison with their private sector counterparts and whether cutting government jobs actually saves money.

A Look At Governors' Races Across The Country

November 4, 2010 • Republicans not only did well in Tuesday's congressional races, they also picked up more than 10 governors' seats that had been held by Democrats. The two parties have differing interpretations of Tuesday's outcome.But one thing is clear; President Obama's potential path to re-election in 2012 was not made any easier.

A Look At Governors' Races Across The Country 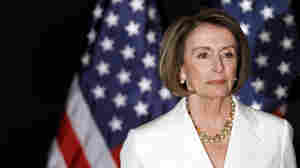 House Speaker Nancy Pelosi waits to speak to supporters at an election night party in Washington on Tuesday. The California Democrat must relinquish the speaker's gavel after Republicans regained control of the House. Alex Brandon/AP hide caption

November 4, 2010 • During Nancy Pelosi's four years as speaker of the House, Congress approved the massive health care overhaul, an $800 billion stimulus bill and a multibillion-dollar rescue of the banks. But her accomplishments were denounced by angry voters this campaign season, and now she must relinquish the speaker's gavel.

A Look At Elections In West Virginia

November 2, 2010 • With voting under way across the nation, NPR's Brian Naylor is in West Virginia to report on closely watched elections there.

A Look At Elections In West Virginia 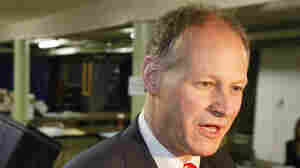 Seniors Focus On Finances, Wars Ahead Of Vote

October 26, 2010 • Polls show seniors are by far the likeliest age group to turn out in next month's midterm elections. According to a survey by the senior lobbying group AARP, more than two-thirds of all voters are likely to be older than 45.

Pa. Seniors Focus On Finances, Wars Ahead Of Vote

October 20, 2010 • Democrats have a good chance to pick up the seat held by Republican Sen. Jim Bunning, who's retiring. Kentucky Attorney General Jack Conway, a Democrat, is running against Republican Rand Paul. Conway's recent attack ad highlights Paul's involvement in a college prank at Baylor University some 25 years ago.

October 14, 2010 • While Democrats face stiff political headwinds this election season, they've received support from one group not often associated with Democratic candidates: the National Rifle Association. The pro-gun group has endorsed 58 Democrats running for the House, as well as some Senate and Gubernatorial candidates. For Democrats in conservative rural districts, the NRA's support could be crucial. 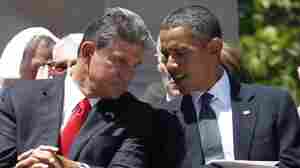 West Virginia Gov. Joe Manchin talks to President Obama at a memorial service in July for Democratic Sen. Robert C. Byrd of West Virginia. The Democratic governor was expected to cruise to victory in the race to fill the Senate seat Byrd occupied, but his Republican opponent, John Raese, has tried to tie the popular governor to the not-so-popular president and is ahead in some polls. Charles Dharapak/AP hide caption

October 5, 2010 • Democrats were optimistic about holding on to the U.S. Senate seat in West Virginia that was held for 50 years by Democrat Robert Byrd. Popular Democratic Gov. Joe Manchin was expected to win in a walk, but he is facing a tough challenge from Republican John Raese.

Should Drivers Hang Up? State Officials To Weigh In

September 25, 2010 • Highway safety officials are considering whether to recommend banning all cell phone use by drivers. Such a ban would include hand-held and hands-free devices. Eight states and the District of Columbia now ban hand-held cell phone use; 30 states ban texting while driving.

Should Drivers Hang Up? State Officials To Weigh In 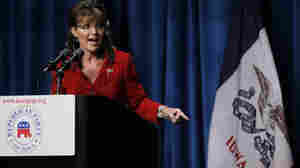 September 18, 2010 • The former Alaska governor was coy about her future political plans and tried to focus attention on the upcoming midterm elections at Friday's annual Ronald Reagan Dinner in Iowa. She called on Republicans to get behind the candidates who won their primaries.