November 28, 2011 • The Democratic National Committee released an Obama campaign ad Monday suggesting that Mitt Romney's worst enemy is Mitt Romney. The TV ad, airing in targeted markets in five swing states — including Ohio and Pennsylvania — highlights Romney's evolving positions on such central issues as health care, abortion and bank bailouts. It suggests Democrats assume Romney will be the nominee and indicates their plan of attack for the year. 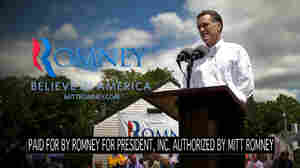 This video frame grab provided by the Mitt Romney presidential campaign shows a scene from an ad called "Believe in America" that is running in New Hampshire. Romney Presidential Campaign/AP hide caption

Online Ads: Spreading Your Message, On A Budget

November 22, 2011 • Most of the videos in the presidential campaign so far have been seen, and distributed, online. They're cheaper for the candidates to produce, and often get picked up by news outlets anyway.

Online Ads: Spreading Your Message, On A Budget 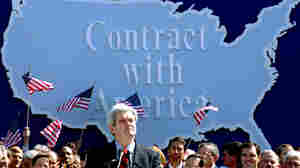 In September 1994, then-House Minority Whip Newt Gingrich addressed Republican congressional candidates on Capitol Hill during a rally where they pledged a new "Contract with America." Months later, Republicans gained control of both houses of Congress for the first time in decades, and Gingrich became speaker of the House. John Duricka/AP hide caption

To Imagine A Gingrich Presidency, Look To The '90s

November 18, 2011 • Newt Gingrich rose to prominence as the leader of the 1994 Republican revolution, in which the GOP took back the House majority after 40 years in the wilderness. During his reign, Congress forced a government shutdown, overhauled the welfare system, balanced the budget for the first time in decades and impeached the president.

To Imagine A Gingrich Presidency, Look To The '90s 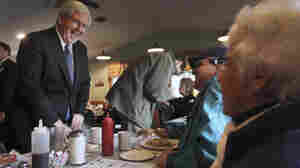 Gingrich talks to a breakfast crowd during a campaign stop at the Circle Restaurant in Epsom, N.H., on Friday. A new CBS poll of Republican primary voters finds him tied for second place with Mitt Romney, behind Herman Cain. Jim Cole/AP hide caption

Slow, Steady Climb To The Top For Gingrich

November 11, 2011 • This summer, the former House speaker's campaign seemed to bottom out when most of his staff quit. Now, the 68-year-old finds himself in the top tier of candidates for the Republican presidential nomination. He credits his rise in the polls to his "serious, substantive approach" to the issues.

For Gingrich, A Slow And Steady Climb To The Top

In Ads, Candidates Turn Up Heat On Romney

November 7, 2011 • While the controversy surrounding Republican Herman Cain has dominated the news, the presidential candidates continue to attack one another in videos and paid TV ads. Democrats and Texas Gov. Rick Perry have both targeted the former Massachusetts governor.

In Ads, Candidates Turn Up Heat On Romney 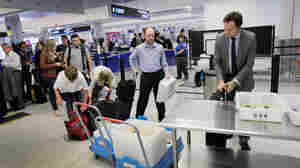 Passengers wait to clear security next to the newly opened pre-check lane at Miami International Airport. The airport is one of four that is allowing frequent fliers to use a special security line where they can keep their shoes on and their laptops in their bags. Joe Raedle/Getty Images hide caption

November 3, 2011 • Under a program called "pre-check," officials are letting frequent travelers at four airports use special security lines where they can keep their shoes on and their laptops in their bags. And in Detroit, they're giving "chat downs" to check passengers for behavioral ticks. The idea is to focus on people more likely to pose threats.

October 28, 2011 • The GOP candidate's political ads, featuring a smoking chief of staff and a head-scratching Western movie spoof, have become Internet hits. But are they helping his campaign?

Are Farm Subsidies At Risk?

October 20, 2011 • With the supercommitee desperately seeking deficit reduction, it has alighted upon a sacred cow: farm subsidies. They're especially alluring considering that farmers are among the few economic groups doing well these days. But aggies — not to worry. What Congress might take away in $5 billion worth of direct payments, it's considering putting back in a new form of subsidy for crop insurance.

Are Farm Subsidies At Risk?

October 17, 2011 • The union representing the nation's letter carriers has hired a former Obama administration adviser as it faces proposals that could lead to layoffs of thousands of its members. Ron Bloom oversaw the administration's auto industry task force. His hiring by the National Association of Letter Carriers comes as the union is negotiating a new contract with the U.S. Postal Service, which cannot find a way to make delivering mail by hand profitable. It is losing billions of dollars and is considering drastic steps to cut costs. 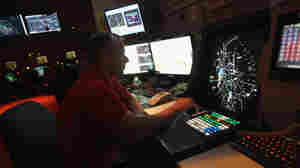 An air traffic controller monitors flights in July at the Denver International Airport. The Federal Aviation Administration is planning to modernize its traffic control system, but has faced a number of obstacles.

'NextGen' Air Traffic System Has Yet To Take Off

October 15, 2011 • The government is trying to modernize the nation's air traffic control system, but cost overruns, software problems and management concerns are making some wonder whether the so-called "Next Generation" system may take another generation to complete.

'NextGen' Air Traffic System Has Yet To Take Off 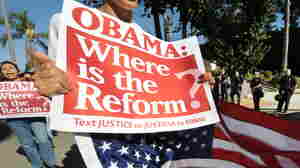 Last summer, immigration rights activists in Los Angeles gathered for a rally calling on the government to act on immigration overhaul legislation. Strong Latino support helped President Obama win in 2008, but his support among those voters is slipping. 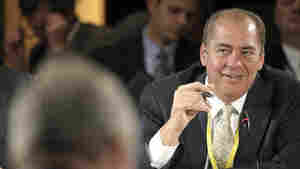 Acting West Virginia Gov. Earl Ray Tomblin, shown at the National Governors Association meeting in February, is running in a special election for the seat Tuesday. The conservative Democrat has been endorsed by several groups, from the NRA to the mineworkers' union. Cliff Owen/AP hide caption

In W. Va., Obama Policies Are On Ballot

October 2, 2011 • Voters will choose the state's next governor in a special election Tuesday. On the ballot are the man who has been acting governor, Democratic state Senate President Earl Ray Tomblin, and GOP businessman Bill Maloney. But Republicans are trying to make the race a referendum on someone else: President Obama.

In West Virginia, Obama's Policies Are On The Ballot 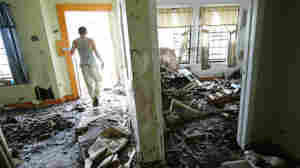 Justin Mudge walks through the muddy interior of his great uncle's gun shop, destroyed by flooding caused by Irene on Sept. 1 in Prattsville, N.Y. FEMA will run out of money to help disaster victims by early next week unless Congress acts. Monika Graff/Getty Images hide caption

What Happens If FEMA Runs Out Of Money?

September 23, 2011 • Unless Congress acts, it will happen early next week, putting a halt to projects in communities around the country still struggling to recover from this year's spate of hurricanes, tornadoes and wildfires. And it would leave FEMA unable to respond to new disasters.

What Happens If FEMA Runs Out Of Money? 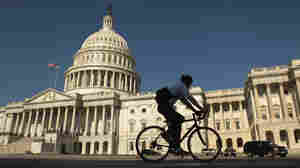 Cities across the country are investing more money in infrastructure to make roads safer for bikes. Last week, a highway bill faced resistance from lawmakers who saw those kinds of projects as an inappropriate use of federal funds. Chip Somodevilla/Getty Images hide caption

September 22, 2011 • More cities nationwide are investing in ways bikes and pedestrians can share the road with cars. Still, the projects have been slow to catch on in other places, most notably in Congress, where some lawmakers feel these and other "transportation enhancements" are not an appropriate use of federal dollars.