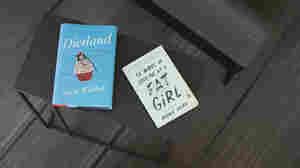 March 31, 2016 • Authors Sarai Walker and Mona Awad were tired of the way fat characters were — and weren't — portrayed in fiction. Dietland and 13 Ways of Looking at a Fat Girl attack a culture of stigmatization. 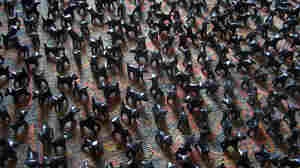 It took a little over a year for Sara Baume's debut novel — about a troubled man who adopts a one-eyed dog — to go from being accepted for publication to being published. "I made the clay dogs to keep the thing alive for myself after it was finished, but before it was a book," she writes on her blog. Sara Baume hide caption

For A Young Irish Artist And Author, Words Are Anchored In Images

March 17, 2016 • "I see the world and then I describe it," says Sara Baume. Her debut novel, Spill Simmer Falter Wither, is a "very atypical love story" between a troubled man and his adopted one-eyed dog.

For A Young Irish Artist And Author, Words Are Anchored In Images

'The Martian' Started As A Self-Published Book

February 27, 2016 • The movie that was nominated for several Oscars began as a self-published book by Andy Weir. NPR's Lynn Neary looks at how an unknown author's book became a hit audio book and major motion picture.

'The Martian' Started As A Self-Published Book 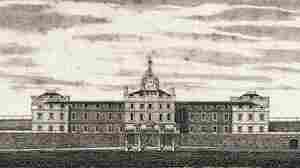 Austin Reed was an indentured servant who set fire to his employer's farmhouse after he was whipped for "idleness." Reed was sent to The House of Refuge, the nation's first juvenile reformatory, and later sentenced to serve in New York's Auburn State Prison (above) in 1840. Courtesy of Penguin Random House hide caption

Written Behind Bars, This 1850s Memoir Links Prisons To Plantations

February 26, 2016 • The Life and the Adventures of a Haunted Convict is the earliest known prison memoir by an African-American writer. Written by Austin Reed in the 1850s, it was discovered at an estate sale in 2009.

Written Behind Bars, This 1850s Memoir Links Prisons To Plantations 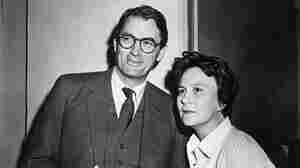 Actor Gregory Peck and novelist Harper Lee in 1962, on the set of the Universal Pictures release To Kill A Mockingbird, in which Peck plays Atticus Finch. Bettmann/Corbis hide caption

February 19, 2016 • The author, who died Friday at 89, lived for decades in the shadow of her iconic novel, To Kill a Mockingbird. Yet there was more to Lee than her characters, however beloved they may remain.

February 19, 2016 • Lee won the Pulitzer Prize for the novel that was published in 1960 and didn't publish another book for more than 50 years afterward. She avoided the spotlight her entire life. She was 89. 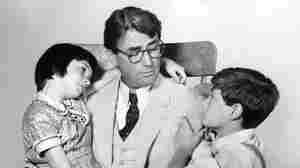 It was recently announced that Aaron Sorkin will be adapting To Kill A Mockingbird for Broadway. Above, Scout's legs are tired after a particularly long "walk and talk." (Not really.) Above, Gregory Peck as Atticus Finch with Mary Badham as Scout and Phillip Alford as Jem in the 1962 film adaptation of Harper Lee's novel. Silver Screen Collection/Getty Images hide caption

To Sorkin A Mockingbird: Screenwriter Will Adapt Novel For Broadway

February 12, 2016 • How will Aaron Sorkin's rapid-fire dialogue fit with Harper Lee's tale of racism and justice in the South?

To Sorkin A Mockingbird: Screenwriter Will Adapt Novel For Broadway 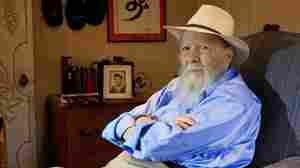 January 14, 2016 • The Pulitzer Prize-winning author of beloved blockbusters like The Winds of War is celebrating his milestone with a new memoir, Sailor and Fiddler, that sums up his thoughts on what it means to write.

January 11, 2016 • Matt de la Pena's Last Stop on Market Street won the Newbery Medal for the best children's book of 2015. Finding Winnie, the story behind A.A. Milne's Winnie the Pooh, has won the Caldecott Medal for the top illustrated book. 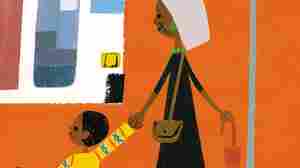 January 11, 2016 • Matt de la Peña becomes the first Hispanic author to win the Newbery award for children's literature, while the Caldecott picture-book prize went to a book about the real-life Winnie the Pooh. 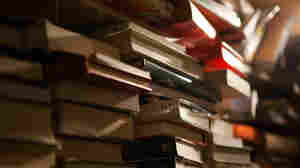 January 9, 2016 • Numbers show more authors are finding it hard to make a living income. Fresh off of fighting the Google Books case, the Authors Guild is now taking on author contracts in an open letter to publishers. 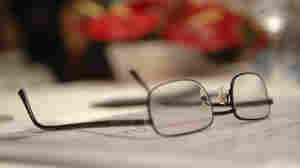 How much do editors shape the final book we read? iStockphoto hide caption

December 29, 2015 • Earlier this year it became clear that Harper Lee had extensively revised To Kill a Mockingbird on the advice of her editor. That made us wonder: How much do editors shape the books we read?

December 15, 2015 • James Patterson has donated hundreds of thousands of books and millions of dollars to promote reading. In partnership with Scholastic, this year he is giving nearly $2 million to school libraries.

Restrictions In Travel Leave Cuban Migrants Stranded On The Way

December 6, 2015 • Thousands of Cuban migrants are stuck at the Costa Rica-Nicaragua border. Nicaragua, a close ally of Cuba, won't let the migrants enter into its country to continue north to the United States.

Restrictions In Travel Leave Cuban Migrants Stranded On The Way

Obama To Deliver Speech On Terrorism And San Bernardino Attacks

December 6, 2015 • President Obama will address the nation Sunday night on the threat of terrorism in the wake of the attacks in California and Paris. It will be a rare prime-time speech from the Oval Office.

Obama To Deliver Speech On Terrorism And San Bernardino Attacks