May 29, 2014 • Gun violence in Chicago is so common in some neighborhoods that the daily reports of shootings can seem like little more than numbers. Our reporter saw the dangers of Chicago's South Side firsthand.

May 23, 2014 • The National Transportation Safety Board calls on the FAA to take another look at the safety of the battery used in its Dreamliners.

May 23, 2014 • AAA predicts that more Americans will travel this Memorial Day weekend than any other since the start of the Great Recession. Those who do may find higher air fares but gas prices have leveled off.

May 19, 2014 • Many grain bins and silos remain full, long after last fall's harvest because the railroads are behind in shipping. A slowdown in rail service is delaying deliveries of other commodities too.

May 14, 2014 • The U.N. organization that oversees aviation is taking a big step toward requiring global satellite tracking of all commercial flights. The move follows the disappearance of a Malaysian Airlines jet.

April 29, 2014 • Over the last two days, deadly tornadoes have left a path of destruction in their wake. One subdivision in Vilonia, Arkansas, was particularly hard hit on Sunday.

Northwestern Players Cast Union Vote — But Results Will Have To Wait

April 25, 2014 • Northwestern University football players are voting Thursday on whether to unionize. Earlier, the National Labor Relations Board in Chicago ruled that the athletes' team requirements essentially make them employees of the university. This, in turn, means they can form a union. The university is appealing the NLRB ruling to the full board.

Northwestern Players Cast Union Vote — But Results Will Have To Wait

For Short Trips, Intercity Buses Horn In On Airline Customers

April 22, 2014 • A study suggests buses offering lower fares, with wide seats and amenities such as WiFi, are seeing significant growth in ridership on trips up to 500 miles, sometimes at the expense of airlines.

For Short Trips, Intercity Buses Horn In On Airline Customers 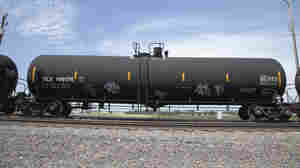 Safety advocates have been pressuring Canadian and U.S. officials to create new safety standards for tank cars and to make old DOT-111s like this one more puncture-resistant. Nati Harnik/AP hide caption 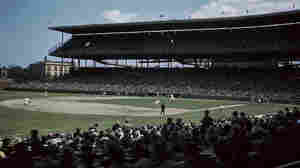 The view inside Wrigley Field during a 1959 Cubs game. The stadium was built in 1914 and celebrates its centennial this year. AP hide caption

Chicago Celebrates A Century Of Baseball At Wrigley Field

April 4, 2014 • It's been the home of the Cubs since 1916, and in all that time, the team has never won a World Series. So why do fans keep showing up? Locals say Wrigley's hallowed status isn't just about baseball.

Chicago Celebrates A Century Of Baseball At Wrigley Field

March 31, 2014 • A Chicago law firm is taking the first legal action against Malaysian Airlines and Boeing, the maker of the 777 that disappeared over the Indian Ocean, on behalf of the families of the passengers.

Board Rules Athletes At Northwestern University Are Employees

March 27, 2014 • The decision still must be approved by the full NLRB board in Washington, D.C. The regional director ruled football players at Northwestern qualify as employees and may therefore unionize.

Board Rules Athletes At Northwestern University Are Employees

March 26, 2014 • The National Labor Relations Board says Northwestern University football players can unionize. It's a win for student athletes, but the university says it will appeal.

March 21, 2014 • There are concerns that the objects sunk to the bottom of the ocean. Officials remain optimistic and say the hunt will continue off the coast of Australia for Malaysia Airlines Flight 370.