June 9, 2012 • High-profile conservatives gathered outside the Windy City Friday for CPAC Chicago, a meeting sponsored by the American Conservative Union. Much of the discussion centered on Republican Gov. Scott Walker's victory in a gubernatorial recall election in Wisconsin on Tuesday. 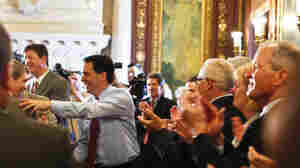 Wisconsin Gov. Scott Walker (center) is greeted by his Cabinet and staff Wednesday at the state Capitol in Madison, a day after defeating Milwaukee Mayor Tom Barrett in a recall election. Andy Manis/AP hide caption

June 6, 2012 • Wisconsin's GOP Gov. Scott Walker made history by pushing back an effort to recall him from office. Walker's salvation was already a vital cause for the conservative movement. Now, there's speculation about what the future holds for the 45-year-old governor.

June 4, 2012 • Wisconsin's historic gubernatorial recall election is on Tuesday. Republican Scott Walker could become just the third sitting governor in U.S. history to be recalled from office. The recall battle has bitterly divided the state; so much so that some people have just stopped talking politics with friends, neighbors, co-workers, even family members. But two Wisconsin couples — one Republican and the other Democratic — are trying to bridge the partisan divide in the state.

Enthusiasm To Recall Wis. Governor May Be Waning

June 3, 2012 • On Tuesday, Wisconsin voters will decide whether Republican Scott Walker becomes just the third governor recalled from office in U.S. history. But as NPR's David Schaper reports, some now wonder whether the intensity of the left has been eclipsed by the resolve of the right.

Enthusiasm To Recall Wis. Governor May Be Waning

June 1, 2012 • Above average voter turnout is expected for next week's gubernatorial recall election in Wisconsin. Passions have run high in the state ever since Republican Governor Scott Walker launched an effort to curb the collective bargaining power of public employee unions. 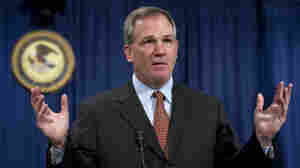 May 26, 2012 • After more than a decade busting corruption, Patrick Fitzgerald is stepping down. The federal prosecutor, known as "Eliot Ness with a Harvard degree," went after the Gambino crime family, al-Qaida and even the White House — not to mention two former Illinois governors who are now in jail.

May 23, 2012 • Patrick J. Fitzgerald, the United States Attorney for the Northern District of Illinois, is leaving his position at the end of June. Fitzgerald has put two Illinois governors in prison and has handled other high-profile prosecutions, including that of Scooter Libby and Conrad Black.

May 22, 2012 • Eugene Polley, the inventor of the first wireless television remote control, has died at age 96.

May 18, 2012 • What's being called the first official protest of NATO kicked off Friday in downtown Chicago, where an estimated 1,000 nurses are expected to gather. They're calling for a "Robin Hood Tax" whereby Wall Street earnings are taxed to help relieve inadequacies in healthcare.

May 18, 2012 • The NATO summit begins this weekend in Chicago, and police officials say they are ready. Thousands of protesters are expected to hit the city's streets. Authorities say they will quell any violence without fanning the flames.

May 16, 2012 • The homicide rate in Chicago has soared more than 50 percent in the first few months of 2012 over the same time period last year. The number of non-fatal shootings is up sharply, too. Why? Some say it could be just a statistical blip or due to rising temperatures, as Chicago had an extremely mild winter this year with record-setting warmth in March, the bloodiest month. But others say there is a deeply entrenched culture of violence in some city neighborhoods and within the prolific Chicago street gangs. They worry 2012 could be one of the most violent years in the city since the 1990s. 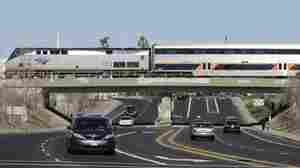 California's Legislative Analyst's Office said the latest proposal to build a $68.4 billion high-speed train system is still too vague and the state legislature should not approve funding it for it this year. Rich Pedroncelli/AP hide caption

May 13, 2012 • The first high-speed Amtrak trains outside of the Northeast Corridor are racing through parts of Michigan at 110 mph. But President Obama's ambitious high-speed rail initiative is otherwise in a slowdown mode, since lawmakers and some governors have not embraced the program.

May 9, 2012 • Voters in Wisconsin Tuesday, chose the Democrat who will face Republican Governor Scott Walker in next month's gubernatorial recall election. The winning Democrat was Milwaukee Mayor Tom Barrett. 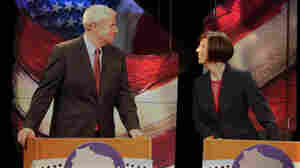 Tom Barrett and Kathleen Falk chat before the start of a live debate for Democratic gubernatorial primary candidates Friday at the Wisconsin Public Television studio in Madison. The front-runners vying for a chance to take on Republican Gov. Scott Walker in a June recall election bashed the governor during the debate. Not pictured are fellow candidates Doug La Follette and Kathleen Vinehout. Rick Wood/AP hide caption

May 8, 2012 • The winner of the Dairy State's Democratic gubernatorial primary will face Gov. Scott Walker in a recall election June 5. After he took office last winter, Walker and fellow Republicans in the Legislature pushed through a law limiting collective bargaining rights, and the state has been on fire politically ever since. 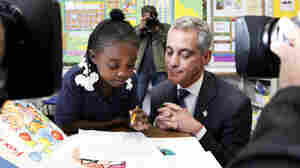 April 23, 2012 • Most Chicago public schools have less-than-six-hour school days — some of the shortest in the country. And many have no recess. Mayor Rahm Emanuel is pushing to lengthen the day to at least seven hours. But critics say some crucial details are missing — especially, how much a longer school day would cost.